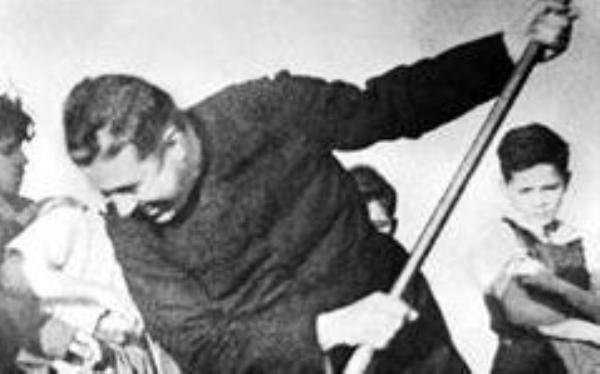 The Feast of Alberto Hurtado SJ on 18 August gives Andrea Kelly occasion to reflect on the work of the centre in East London that bears the name of the Chilean Jesuit saint. How does the unique approach to the formation of all those involved in the work of the Hurtado Jesuit Centre facilitate their work in one of London’s most challenging areas?

It is necessary to accept the Incarnation with all its consequences ... Christ has made himself our neighbour or rather, our neighbour is Christ who presents himself under one or another form: a patient among the sick, a needy man among beggars, a prisoner among the incarcerated, the heartbroken among those who weep ... In Christ we are all one ...[1]

These words are as relevant in London in 2013 as they were when they were first spoken in Chile in 1943 by St Alberto Hurtado (1901 – 1952). On 18 August, we celebrate the feast of this Jesuit priest, journalist and intellectual from Chile who championed the needs of homeless people and underpaid workers. He is the patron of a Jesuit work in London’s East End which seeks to respond to the challenge, implicit in his words, of meeting Christ in our neighbour.

The Hurtado Jesuit Centre was established as a place of welcome and community in Wapping in 2011. In an area where excessive wealth exists alongside extreme deprivation, the problems caused by destitution and particularly by child poverty are exacerbated by a lack of social cohesion. Through its various works, we have been working to develop the Centre as a source of spiritual companionship, through conversation and practical support, for the people of this neighbourhood.

Our programme includes retreat days for busy people, and activities that bring together people of all faiths and cultures. As we discovered from the response to a recent Urban Retreat Day at the Centre, there is a deep thirst in many people to find sources of meaningfulness and renewal in their lives, and also a striking readiness to make this exploration in fellowship with others. As well as creating a space for this encounter and a haven for spiritual reflection, we are a base from which to work for social justice. The Centre is home to the Jesuit Refugee Service (JRS) and the London Jesuit Volunteers (LJV), two initiatives that seek to accompany and serve people who are marginalised and in need; and to an international community of young Jesuits who are studying for the priesthood and developing their pastoral skills in this very diverse part of London.

At the core of everything we do is our aspiration to care for the whole person. This is the cura personalis which is at the heart of the Jesuit ethos, a grace that we seek to express in the way in which we live and work, as Jesuits, co-workers, volunteers, friends, guests and retreatants at the Centre. It is a noble goal – and a tall order! How can we nurture this capacity for care in ourselves and in our community? What does it mean in terms of our formation and growth? And what does the spirituality of Ignatius Loyola have to contribute?

There are various ways of walking with the Spirit, and each of the great spiritualities in the life of the Church is, in essence, a graced way of following Jesus that receives its initial impulse from a unique encounter with the Lord: ‘At the root of every spirituality there is a particular experience that is had by particular persons living at a particular time...’.[2] The Spiritual Exercises of Ignatius of Loyola are deeply rooted in this experience of the particular, and focus on three central ideas for living:

• The first is ‘incarnational’: God is alive and with us in the here and now.
• The second is ‘communitarian’, meaning that we are meant to live in community with one another.
• The third is ‘reflective action’, calling us to reflect on the nature of God as a starting point for acting in the world. This includes learning to act justly, love mercifully and walk humbly in everything we do.

At the Hurtado Jesuit Centre, we explore these ideas on a daily basis, and one of the significant ways in which we do this is by engaging the Jesuit community and the Centre staff and volunteers in a shared process of formation.

A shared process of formation

The young Jesuits who live at the Centre are also pursuing their theological studies at the University of London; their work in the neighbourhood complements and counterbalances their academic activities. Much of this work is focused on catechesis in the surrounding parishes, so the impact of poverty and the recession is something with which they all engage and it forms a significant part of their induction into pastoral ministry. Over this last year, they have also become involved with the work of Citizens UK, a grass roots, community alliance campaigning on wages, housing, safer streets and immigration. The Jesuit community is currently conducting a listening campaign on local needs in an area where the gap between rich and poor is dramatic. Such an activity is an example of the engagement that Pope Francis called for recently in his remarks to an audience of students attending Jesuits schools: ‘Involvement in politics is an obligation for a Christian. We Christians cannot “play the role of Pilate”, washing our hands of it; we cannot. We must be involved in politics because politics is one of the highest forms of charity for it seeks the common good.’[3]

Traditionally, for religious, ‘formation’ is a structured period of induction into the practice of a particular spirituality and way of life – its methods of prayer, its apostolic works and its community life. But since Vatican II, we have increasingly spoken also about ‘formation’ as applied to the laity, although with less clarity about what that entails. The reflection groups that all of our volunteers – those who work with JRS and those with other placements arranged by LJV – take part in are led by members of the Jesuit community and play a special role in the support and formation of the volunteer. The prayerful sharing of experience is essential to the quality of volunteering, and the insight that volunteers gain by sharing is deeply appreciated as a source of personal growth. It is precisely this process of prayer and reflection that distinguishes this kind of engagement from many other works of social outreach and adds a dimension of faith formation that is quite extraordinary. Even as we seek to develop collaborative volunteering in our local area with people of other faiths and none, the reflection and sharing of experience will remain central to our work, even if we have to conduct it in new ways. The simple act of looking at their daily lives through the lens of volunteering can and does lead volunteers to make major decisions about career, marriage, vocation and many other significant life events.

Take, for example, the experience of Isabel Olizar, who was a member of London Jesuit Volunteers for three years before moving with her husband and young son to the USA:

My faith has been nurtured and deepened by my time with London Jesuit Volunteers (LJV) ... and with the Hurtado Jesuit Centre in Wapping. I stumbled across LJV on the internet when I was looking for opportunities to volunteer in London and was immediately struck by the three commitments it asks volunteers to make: to action, serving marginalised people in London; to contemplation, individually and as part of a group; and to community, both to LJV and to the placement community.
My placement with the Jesuit Refugee Service involved me in weekly visits to an immigration removal centre. Initially the commitment to service seemed the most significant and tangible, but over time I have come to appreciate fully each of the three commitments and the way that they reinforce each other. I found reflection and prayer before visits to the removal centre helped me to better accompany the detainee during our time together; and coming together in small groups and as a wider community to reflect on our experiences was often inspiring, and allowed us to understand better and learn more from our experiences.[4]

Certainly there is something special about bringing together religious and lay people who are of a similar age. Particularly in young adulthood, the ‘peer’ effect and the exchange of experience are very powerful factors. As young Jesuits are sharing their experience of Ignatian prayer and discernment with the volunteers, they are simultaneously being drawn with the volunteers into their engagement with the poor and the marginalised people of London, and ultimately into identification and solidarity with them. In a very Ignatian way, therefore, they come together in community to challenge the sacred/secular divide head on, and to discover the sacredprecisely in the secular world. And so there is a communitarian aspect to this process of ‘contemplation in action’, which is why the dynamic is seen as being threefold: prayer, action and community.

Ultimately, however, this incarnational process of finding God in the here and now, and most especially in each other, is a path that leads away from the external structures of formation and into a deeper following of Christ – a conforming of ourselves to Christ. The day comes when we realise that we ourselves are being greeted by Christ himself in the poor and marginalised people whom we meet, a moment which brings great joy and gratitude, and a deepening of faith. This is the consequence of the Incarnation that our patron, Alberto Hurtado, urged us to embrace.

Andrea Kelly is a member of the team at the Hurtado Jesuit Centre.

(Music: Sanctus performed by the University of Johannesburg Choir.)

[1] Alberto Hurtado, ‘The foundation of our love of neighbour’ in A fire that lights other fires: selected pages from the writings of St Alberto Hurtado SJ, translated into English in 2011 by the Centro de Estudios San Alberto Hurtado de la Pontificia Universidad Católica de Chile (www.uc.cl), with the permission of the Provincial Superior of the Jesuits in Chile, pp. 163-164.

[3] Address of Pope Francis to the students of the Jesuit Schools of Italy and Albania, 7 June 2013: http://www.vatican.va/holy_father/francesco/speeches/2013/june/documents/papa-francesco_20130607_scuole-gesuiti_en.html