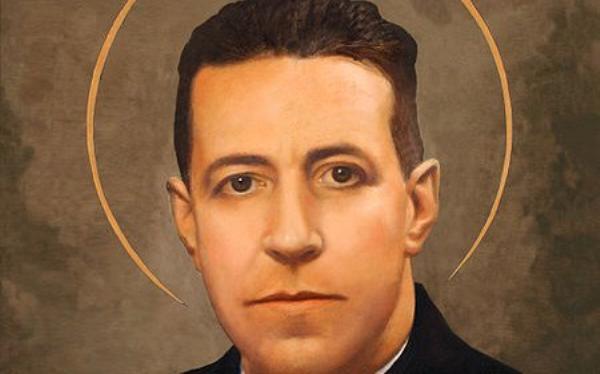 On the doorstep of London’s Olympic Village, a new Jesuit centre is seeking to reach out to the residents of London’s most deprived borough. The Hurtado Jesuit Centre is named after a Chilean Jesuit saint who was canonised in 2005 and whose feast we celebrate on 18 August. Who was Alberto Hurtado and, sixty years after his death, how is his passion for justice being lived out in East London?

Alberto Hurtado Cruchaga was born in January 1901, the first son of well-to-do parents. Within five years his father was dead and his widowed mother had fallen on hard times, moving up from the coast to Santiago.

The boy was sent to St Ignatius College, one of Chile's most enduring Jesuit institutions, and when his mother's financial insecurity forced the Society to refuse him immediate admission to the novitiate, he embarked on law studies at the Catholic University.

Already a young man who stood out for the brilliance of his intellect, the zeal of his work with the poor and his capacity for friendship with young and old alike, his eventual departure to enter the Jesuits was marked by a special Mass celebrated by the Rector. Recognition of his singular magnetism accompanied him at every stage of his career.

Long years of Jesuit formation took him to Argentina, Spain and, when the Jesuits were expelled from there, to Louvain in Belgium where he wrote a doctoral thesis on pedagogy. Here was an audacious move. For he chose to study the thinking of John Dewey, a figure who represented just the kind of agnostic, gringo heresy which was anathema to established Catholic thinking of the epoch.

Alberto had no time for blinkered parochialism. Catholicism was a spirit of radical openness to truth, even if it came from sources opposed to the Church. Moreover, Dewey's thought is imbued with a concern for social context and pragmatism. Hurtado saw that, over time, confessional fixation on the centrality of one's intentions had led to a kind of Catholic unreality: as long as one means well, actual consequences do not matter too much. Applying such an approach to social action or education, Hurtado now realised, is catastrophic. It obliges people to do something but not does encourage them to think through what that something ought to be.

His thesis was an invitation to the Church to face reality rather than work from pre-fabricated positions, a message both threatening and empowering. In February 1936, Hurtado arrived back in Chile as a priest and promptly proceeded to threaten and empower in roughly equal measure.

In 1941, he published a book which sent shock waves through the country: Is Chile a Catholic Country? It was a provocative title which pointed up both the increasing mediocrity of Chilean Catholic life and the renewing force of his own vision. In its pages, he opened up an offensive against materialism, its toxic effects on the young, its atrophying of vocations, and, above all, the way its pernicious cultural impact aggravated the plight of the poor.

Alberto was years ahead of his time in his approach to social issues. ‘Injustice’, he insisted with enviable clarity, ‘causes far more evil than can be repaired by charity’. So he advocated and made his own the arduous tasks of reading, social analysis, planning action, establishing institutions and deepening that Ignatian contemplative regard which takes in the whole world and is free enough to see just how bad things truly are. It was the antithesis of feel-good, charitable giving, but he knew that in it he would find God.

With this in mind, he undertook a gruelling trip to post-war France to update his thinking. Once again he stood out from the crowd. A fellow Jesuit describes his intervention at a conference as ‘a cry of anguish but at the same time an irresistible lesson in pure, ardently supernatural zeal’.

The trip enthused him greatly. Doubtless, he had already begun to sense in Europe the tremors which would lead to Vatican II. The prophet in him, meanwhile, grasped the shadow-side of that renewal, an advancing secularism and ‘a tendency to forget the true values of the Church, its traditional vision’.

Few individuals can take in a truly panoramic vision, seeking refuge instead in petty dualisms: either charity or justice, either tradition or renewal. How did Hurtado sustain such imposing breadth?

He once wrote: ‘I am often like a rock that is beaten on all sides by the towering waves. For an hour, for a day I let the waves thrash against the rock; I do not look toward the horizon, I only look up to God.’

It comes, then, from a daily experience of a super-generous, ever-faithful God, a God who so desires the salvation of His creatures that human action is never merely human. It is that solidarity, even identification with Christ in the field of action which is both what made a St Alberto possible and forms the substance of his sanctity. The Ignatian exercises facilitate it and the Society of Jesus is its embodiment. It makes for a life that is taut, sprung, like an arrow soaring towards its target, veering neither towards a static contemplativeness nor a frantic activism.

And it makes tangible the great question which was always Alberto's criterion of discernment: ‘what would Christ do?’ [1]

So, why was the name of this Chilean saint of the twentieth century chosen for the new Jesuit house that opened in Wapping in April 2011? Certainly one aspect of Hurtado’s world – the dramatic juxtaposition of rich and poor – will strike any visitor to Tower Hamlets, London’s most deprived borough, with the highest instance of child poverty in the UK. Stand on the Docklands Light Railway platform at Poplar and on one side you will see all the riches of Canary Wharf literally towering over you, while on the other, tracts of desolate, substandard housing and urban decay. To this part of London over the centuries have come successive waves of migrants: Hugenot refugees escaping from persecution in France; Irish refugees escaping poverty and famine; Jewish refugees from the pogroms of Eastern Europe; and now in their place the Sylheti Bangladeshi community which constitutes 35% of the borough’s population.

The Hurtado Jesuit Centre is situated in the south-west of the borough, near to the River Thames. Again it is surrounded by contrasts: pre-war social housing sits alongside expensive warehouse conversions; indigenous East-enders, international bankers, and Bengali families live in close geographical proximity, and yet are sealed from each other in terms of any real contact or exchange. In our first year at the Centre we have spent our time getting to know the local Catholic parish of St Patrick’s and also familiarising ourselves with the wider neighbourhood – visiting schools, churches, mosques, projects (for children, for youth, for woman, for the elderly), hostels for the homeless, counselling and psychotherapy services, literacy and mentoring schemes, and the multi-faith chaplaincy at the London Hospital.

In the picture that is emerging it is evident that poverty takes many forms. In addition to serious material poverty there is also the relational poverty of isolation and disconnectedness, which may apply as much to the financier in his gated penthouse flat as to the elderly widow who still misses the camaraderie and kinship of the East End in the post-war years. At the same time we have been deeply impressed by the commitment of the individuals we have met to stay with the challenges and to make a difference, and we have been left with a sense of their immense good will, energy and talent – and also of great potential still to be unlocked within the wider local community.

In the middle of this milieu, the Hurtado Jesuit Centre is seeking to be what the 34th and 35th General Congregations of the Society of Jesus called a ‘Community of Solidarity’. Its mission and outreach is shaped by a passion for social justice, by the spirit and pedagogy of St Ignatius Loyola and St Alberto Hurtado, and by a desire to be in relationship with people of all faiths and none. How to do this in a place like Wapping, where the materially wealthy live side-by-side with people struggling to make ends meet, and where the planning of the last three decades has produced separated and gated communities, is something to be lived with and discerned carefully.

The three wings of the Hurtado Centre are: Social ministry; Ignatian spirituality; and Christian-Muslim relations. The first wing is expressed through the Jesuit Refugee Service – the primary users of the Hurtado Centre – in its service of destitute and detained asylum seekers. Secondly, London Jesuit Volunteers seeks to offer opportunities for volunteering along with Ignatian spiritual reflection upon that experience. And thirdly, the Centre has started working in Christian-Muslim relations within the area. It is hoped that by working together these three wings will come to be the characteristics of the Jesuit presence in East London. Having the Hurtado Jesuit Community living on site also roots the Centre in the neighbourhood and the parish.

The concern of the Hurtado Centre for the people living and working in East London is essentially a concern for human wellbeing and development, offering a service to those in need, and making intellectual and spiritual formation accessible at the levels of both the individual and the community. And in the spirit of Ignatius, the distinctive underpinning to this whole undertaking is the dynamic of the Spiritual Exercises. These are as relevant in Tower Hamlets now as in Alberto’s Chile. Of course the Centre is engaging with a society which in many ways is very different from that of Santiago in the first half of the twentieth century, and yet at the most basic level there remains the same common human hunger for self-realisation and a space in which to encounter God.

So this is a small beginning – a couple of fish, and one or two loaves. But we are inspired by Alberto’s confidence that by working with Christ, and remaining in him, it is possible to make a real difference. And so we pray: ¡Alberto Hurtado, profeta de justicia, ruega por nosotros!

[1] The text above is an edited and abridged version of an article by Damian Howard SJ published originally in The Tablet on 15 October 2005.