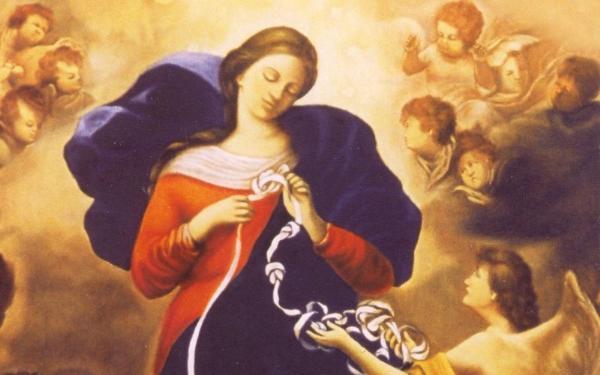 When he returned to Argentina following his doctoral studies in Germany, Jorge Mario Bergoglio SJ, now Pope Francis, took with him a particular fondness for a Marian devotion that he had encountered in Bavaria. Hedwig Lewis SJ introduces us to the increasingly popular devotion to ‘Mary Untier of Knots’.

‘Mary Untier of Knots, pray for us’ would be a strange-sounding invocation in the Litany to Our Lady to which we are so accustomed. In fact, devotion to the Blessed Virgin under this title has been common in parts of Germany for centuries. Recently, however, the world’s attention was drawn to it when Vatican Radio revealed that Pope Francis had championed the devotion decades ago in Argentina.

In the 1980s, while doing his doctoral studies in theology in Freiburg, Germany, as a Jesuit priest, Jorge Bergoglio saw a painting in a church in Augsburg entitled ‘Mary Untier of Knots’. He was so impressed by its stark symbolism that he took postcards of the image back with him to his home province of Argentina. He used to enclose copies in every letter he sent out. An Argentinian artist-friend of his made an oil-on-canvas miniature painting of the picture, which was hung in the chapel of Colegio del Salvador in Buenos Aires where Bergoglio was posted. The college staff was so attracted by it that they persuaded the local pastor to get a larger copy made. This was displayed in the parish church of San José del Talar, in 1996. Eventually, devotion to Mary under the title ‘Untier of Knots’ spread across Latin America.

Shortly after Cardinal Joseph Ratzinger was elected pope, as Benedict XVI, the then-Cardinal Bergoglio presented the German-born pope with a silver chalice engraved with the image of Mary Untier of Knots along with that of Our Lady of Luján, a popular Marian devotion in Argentina.

The original Baroque painting of ‘Mary Untier of Knots’, by Johann George Melchior Schmidtner, dating from around 1700, is found in the church of St Peter am Perlach, in Augsburg, Bavaria, Germany. It measures six feet in height and almost four feet in width.

The painting depicts Mary suspended between heaven and earth, resplendent with light. The Holy Spirit in the form of a dove is above her head, reminding us that she became Mother of God and full of grace by virtue of the third person of the Trinity. She is dressed resplendently in crimson, and a deep blue mantle representing her glory as Queen of the Universe. A crown of twelve stars adorning her head signifies her Queenship of the Apostles. Her feet crush the head of the serpent indicating her part in the victory over Satan. She is surrounded by angels, signifying her position as Queen of the Angels and Queen of Heaven. In her hands is a knotted white ribbon, which she is serenely untying. Assisting her at the task are two angels: one presents the knots of our lives to her, while another angel presents the ribbon, freed from knots, to us.

A German nobleman, Wolfgang Langenmantel (1568-1637) was distraught when his wife Sophia was planning to divorce him. To save the marriage, Wolfgang sought counsel from Fr Jakob Rem, a Jesuit priest, respected for his wisdom and piety, at the University of Ingolstadt. On his fourth visit there on 28 September 1615, Wolfgang brought his ‘wedding ribbon’ to Fr Rem. In the marriage ceremony of that time and place, the maid-of-honour joined together the arms of the bride and groom with a ribbon to symbolise their union for life. Fr Rem, in a solemn ritual act, raised the ribbon before the image of ‘Our Lady of the Snows’, while at the same time untying its knots one by one. As he smoothed out the ribbon, it became dazzling white. This was taken as confirmation that their prayers were heard. Consequently, the divorce was averted, and Wolfgang remained happily married!

To commemorate the turn of the century in the year 1700, Wolfgang’s grandson, Fr Hieronymus Langenmantel, Canon of St Peter am Perlach, installed a family altar in the church, as was customary then. He commissioned Johann Schmidtner to provide a painting to be placed over the altar. Schmidtner was inspired by the story of Wolfgang and Fr Rem, and so based his painting on that event. The image came to be venerated as Mary Untier of Knots. The painting has survived wars, revolutions and secular opposition, and continues to draw people to it.

On 8 December 2000, a chapel dedicated to the Virgin Mary Untier of Knots was inaugurated in Formosa, Argentina. Since 1998, the devotion has been spreading in South America thanks to the booklet Mary, Undoer of Knots Novena, published with ecclesiastical permission by Denis and Dr Suzel Frem Bourgerie. It has been translated into twenty languages. The couple founded the National Sanctuary of the Virgin Mary Untier of Knots in Campinas (Sao Paulo), Brazil, in 2006.

The website ‘Mary Undoer of Knots’ explains that the ‘knots’ Mary can untie,

...are problems and struggles we face for which we do not see any solution… Knots of discord in our family, lack of understanding between parents and children, disrespect, violence, the knots of deep hurts between husband and wife, the absence of peace and joy at home. They are also the knots of anguish and despair of separated couples, the dissolution of the family, the knots of a drug addict son or daughter, sick or separated from home or God, knots of alcoholism, the practice of abortion, depression, unemployment, fear, solitude…

An inspiring prayer that opens the above-mentioned novena sums up the role of the Virgin Mary Untier of Knots:

Holy Mary, full of God’s presence during the days of your life, you accepted with full humility the Father’s will, and the Devil was never capable to tie you around with his confusion. Once with your son you interceded for our difficulties, and, full of kindness and patience you gave us example of how to untie the knots of our life. And by remaining forever Our Mother, you put in order, and make clearer the ties that link us to the Lord. Holy Mother, Mother of God, and our Mother, to you, who untie with motherly heart the knots of our life, we pray to you to receive in your hands [name of person], and to free him/her of the knots and confusion with which our enemy attacks. Through your grace, your intercession, and your example, deliver us from all evil, Our Lady, and untie the knots that prevent us from being united with God, so that we, free from sin and error, may find Him in all things, may have our hearts placed in Him, and may serve Him always in our brothers and sisters. Amen.

Fr Hedwig Lewis SJ, a former principal of St Xavier’s College, Ahmedabad, India, is a writer and the author of psycho-spiritual and professional books. His website is http://joygift.tripod.com

‘A Timeless Magnificat’ by James Hanvey SJ on Thinking Faith

A time of choosing: Conversion and discernment in the mind of Pope Francis