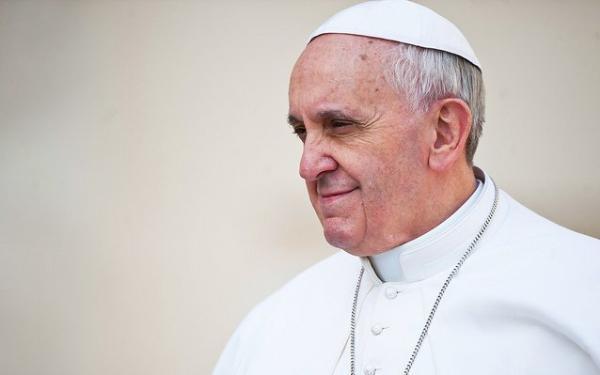 Today, 13 September 2013, we mark six months since the election of Pope Francis. One of the most significant moments of his papacy thus far has been the release of his first encyclical, Lumen fidei, which was published in July. Jesuit theologian Michael Paul Gallagher offers a quick map of the encyclical, highlighting a few points of interest, and encourages readers to explore the whole text.

When Lumen fidei, the first encyclical of Pope Francis, was released in early July, it was immediately apparent that the text owed much to the style and theology of his predecessor, Benedict XVI. The citation in the introductory section of a fascinating sentence from a letter of Nietzsche to his sister did not seem typical of Cardinal Bergoglio. The authorship issue was mentioned openly in paragraph 7, where we are told that Pope Benedict had ‘almost completed a first draft’ and that Pope Francis had ‘taken up his fine work and added a few contributions of my own’. One can do some guesswork about those contributions, perhaps finding the social vision of Pope Francis in the fourth chapter and in various typical expressions of his such as, ‘Let us refuse to be robbed of hope’ (§57). But even in that final chapter there is surprisingly little mention of the ‘poor world’ which has been a key concern for Pope Francis.

Instead of playing a find-the-author game, it seems more fruitful to highlight some of the richness of this text on faith (completing, as it does, previous encyclicals of Pope Benedict on love and hope). Of course the text belongs to the particular context of this Year of Faith. It is also in harmony with a series of reflections that Pope Benedict offered in his weekly general audiences between October 2012 and January 2013, which contain a surprising emphasis on the need, in a time of widespread distance from religious roots, to experience faith as a journey of rediscovery. He insisted that faith is not simply a system of beliefs and values, that it was not just ‘a message about God’ (21 November 2012) but an event of encounter, where we enter into and recognise a relationship with God. These discourses offer what we might call a pastoral spirituality of faith: we are encouraged to foster ‘a pedagogy of desire’, because the ‘human experience of love has a dynamism that refers beyond the self’ (7 November 2012). In other words, faith grows when lived as an experience of love received, when the gift of God’s love ‘envelops and transforms us’ (5 December 2012).

When we turn to the encyclical, it is remarkable to find the word ‘transform’ used more than 20 times in the text with reference to the difference that faith makes to human life. Let me cite just three of these passages: ‘transformed by this love, we gain fresh vision, new eyes to see’ (§4); ‘faith transforms the whole person to the extent that he or she becomes open to love’ (§26); ‘in faith we are receptive to the experience of God’s transforming love for us’ (§46). I would suggest that this focus on transformative love is a leitmotif for the whole document and is an emphasis that liberates us from an over-identification of faith with beliefs.

A word about the structure of the four chapters: the first is largely biblical, insisting that ultimately we believe in love. The second is more philosophical and tackles the complex nature of religious truth, suggesting that beyond all the debates about faith and reason, we need to be able to recognise love as a genuine form of knowledge. (Incidentally, this chapter opens with a favourite topic of Joseph Ratzinger as theologian, where he takes a text of Isaiah 7: 9 and discusses whether it means ‘Unless you believe, you will not understand’, or better, ‘you will not be able to stand fast’.) The third chapter explores the challenge of transmission of faith today and seems less fresh or stimulating than the earlier two chapters. It tends to repeat the Catechism on the act of faith, sacraments, commandments and prayer. The fourth, as already mentioned, offers a more social perspective, seeing faith as also a ‘praxis’ in the service of ‘justice, law and peace’ (§51). In particular, it challenges Christians not to be ashamed of bringing faith into the public sphere.

Before finishing let me comment on two passages that have something in common. That quotation from Nietzsche (in paragraph 2) told his sister to take risks because in an age of uncertainty everyone has to create their own way, and he added: if you just want peace of soul, ‘then believe, but if you want to be a follower of truth, then seek’.In other words, faith offers a false security, and authentic seekers have the courage to go it alone. Against this Nietzschean suspicion, the very title of the encyclical suggests the metaphor of light (a word that appears nearly 150 times in the text). Is faith an illusory light or a genuine one? Is faith fearful and immature, or else courageous in searching for a different light, a ‘great light’ that cannot ‘come from ourselves’ (§3-4)?

In chapter 2 the encyclical returns to the theme of searching, evoking the Magi as figures who follow the light and discover Christ. But in this context the Pope (or should we say popes?) enlarges the perspective in two directions: ‘The light of faith in Jesus also illumines the path of all those who seek God, and makes a specifically Christian contribution to dialogue with the followers of the different religions’ (35). Thus the ‘seeking’ that Nietzsche advocated is now seen as a quality shared by all religious believers and indeed by many genuine unbelievers. And, unexpectedly, the word faith is applied to those who keep searching: ‘faith is also a way for men and women who, though not believers, desire to believe and continue to seek. To the extent that they are sincerely open to love … they are already, even without knowing it, on the path leading to faith’ (§35). Karl Rahner, for one, would be pleased with that generous papal perspective.

Michael Paul Gallagher SJ is Professor of Fundamental Theology at the Gregorian University in Rome.

‘The Light of Faith’ by John Moffatt SJ on Thinking Faith

Laudato si’: a Seismic Event in Dialogue between the Catholic Church and Ecology

Pope Francis, the hermeneutic of conspiracy and the ‘Three F’s’