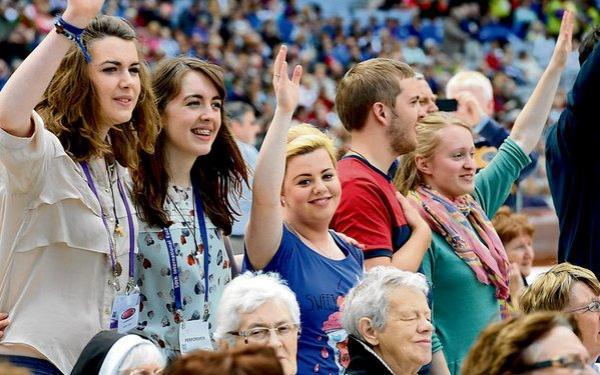 Niall Leahy SJ found an Irish Catholic community ready to embrace renewal and celebrate their faith at the International Eucharistic Congress 2012 in Dublin. A lot has changed in Ireland in the 80 years that have passed since the country last hosted the Congress, so how did this year’s event reflect the transformation in its host country and in the wider Church?

80 years ago, a fledgling Irish state hosted the International Eucharistic Congress. The black and white television images from 1932 show masses of people welcoming church dignitaries enthusiastically and paying public homage to Jesus Christ, the King of Kings, present in the Eucharist.

In 2012, Dublin became one of the few cities to have hosted the International Eucharistic Congress more than once. During the intervening years, Ireland has changed in many ways, culturally, socially and economically. Equally, the Second Vatican Council has transformed the Catholic Church's understanding of its own mission and place in the world. With this in mind, as I journeyed through each day of the Congress I was eager to find out how Catholic Christians' way of 'doing Church' in Ireland has evolved over the best part of a century.

In his homily at the opening Mass, Archbishop of Dublin Dr. Diarmuid Martin inevitably, and appropriately, made reference to the sexual abuse scandals that have been the source of untold hurt. He reminded us that we are very much a people who are in need of healing. The tumult of recent years has certainly rocked the faith of many and there has been a palpable fear of the onset of a spiritual paralysis that would surely send the Irish Church into an irrecoverable tailspin. However, the atmosphere at the Congress bore powerful witness to the presence of God’s grace, through which we are working towards a different future. We could have spent the week licking our wounds and reflecting dolefully on where it all went wrong. But the six themes which set the tone for the daily workshops witnessed to the work of the Holy Spirit, through whom we can nourish our relationship with the risen Lord and our Neighbour: Communion in Common Baptism; Communion in Marriage and Family; Priesthood and Ministry in the Service of Communion; Reconciliation in Our Communion; Communion in Suffering and in Healing; and Communion in the Word through Mary. The choice of these themes certainly revealed something about the priorities of the Catholic Church at the moment, not just in Ireland, but internationally.

Since the last Congress, Ireland has experienced more than its fair share of religious tensions. Fitting therefore for Brother Alois, Prior of the Community of Taizé, to share with us the fruits of a life devoted to breaking down the barriers which have separated the followers of Christ for so long. A key ingredient which has allowed his ecumenical monastic community to develop a tangible ecumenism of the heart is the recognition that the primacy of our common baptism as Christians provides the most fundamental element of our Christian and Catholic identity. 80 years ago, such a statement would have been met with raised eyebrows; this time round, an attentive audience was receptive to the call to Christian unity and grateful for a first lesson in a theological language which embraces rather than excludes.

Taking our baptism seriously leads inevitably to the question of vocation. In 1932, being in the business of the promotion of vocations to religious life and priesthood in Ireland must have been akin to shooting fish in a barrel; seminaries and convents were bursting at the seams. While the policies of successive governments at that time isolated Ireland in economic terms, they could do nothing to stem the tide of priests and missionaries that we exported all over the world. Things have changed. The supposed 'vocations crisis' has prompted us to pray harder than ever to the Lord of the Harvest to send workers into his vineyard. Well the show ain’t over, folks. Proponents of the 'vocations crisis' theory would have been given some food for thought had they attended the discussion on vocation in the vibrant 'Youth Space', where a panel of young Catholics shared some of their insights into the increasingly urgent question of vocation. How refreshing it was to see young, lay Catholics with a conviction of their call to spread the gospel and serve God's people, equal to that of their counterparts who had been called to religious life or diocesan priesthood. So the message is getting out there that we all have a vocation – echoes of Vatican II again! It was also good to hear an emphasis on the values of collaboration and co-responsibility of lay, religious and ordained Catholics, values so important for a Church that is emerging from the shadows of clericalism and exaggerated deference.

At the time of the last Eucharistic Congress, so entwined were the movements of nationalism and Catholicism that no doubt it was hard to know whether the event was an ecclesial or a political celebration, a reflection perhaps of an Irish mentality which had been forged by the prolonged struggle for both religious and political freedom. The Irish Republic was emerging as a bizarre hybrid of a democratic and theocratic State. Somewhere along the line, the drawbacks of such an arrangement began to outweigh the benefits. No surprises, then, that in contemporary Ireland the separation of Church and State is valued by all concerned.

Former Taoiseach and EU Ambassador to the US, John Bruton is no exception in this regard. However, in delivering a passionate defence of the relationship between faith and politics he reminded us that Catholics still have a unique contribution to make to the political life of their country. In order to promote the demands of the gospel in the political field, the former Taoiseach stressed the necessity of developing fluency in both the languages of faith and secular politics, a proficiency which he himself demonstrated admirably. Another hallmark of his speech was the consistent exhortation to promote all the demands of justice, and not to simply become 'single issue' Catholics. Naturally, when he proclaimed the right to life of the unborn, he received rapturous applause. Responding to the enthusiasm of his audience, he then argued that if it is right to fight for those who remain unseen in the womb, then surely we also have to be a voice for all those who are out of our sight in the developing world and yet suffer terribly for want of food and medicine. Unfortunately the applause on this occasion was not so resounding, an indication perhaps of our tendency to focus on polemical issues at the expense of others. Nonetheless, his inspiring and challenging vision of a nation guided by educated, lay Christian politicians rather than the church hierarchy was not lost on an appreciative audience.

As the name of the final Mass, Statio Orbis, suggests, the International Eucharistic Congress provides a unique opportunity to take stock of how the Church has developed over recent decades. Needless to say, the process of renewal within the Church in Ireland is ongoing. Nonetheless we can draw consolation from the fact that those whom the Lord calls to His flock will be joining a community still inspired by the Spirit and who are no strangers to radical transformation.

Watch the video below from the Irish Jesuits to see Niall, along with other Jesuits and co-workers, discussing the Eucharistic Congress:

Jesuits at the Eucharistic Congress from Jesuits Ireland on Vimeo.