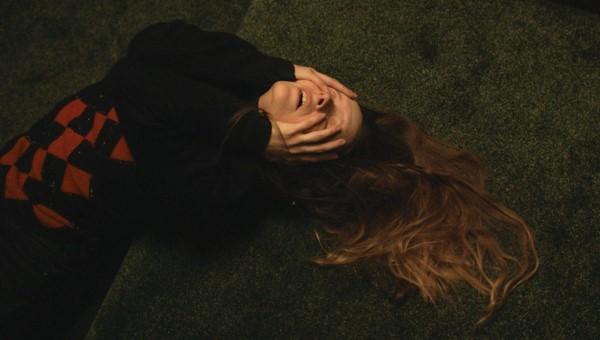 If God spoke to you, what language would you expect to hear? I suspect that few would immediately answer ‘Welsh’ to that question, but the young woman named in the title of Saint Maud is indeed addressed in that language by a crucified Jesus at a key moment of this film. Maud, played by Morfydd Clark, is a nurse who, before the main story begins, has suffered some medical trauma that is only hinted at in flashbacks. As a result she gives up hospital work and instead becomes the private carer of a former dancer, Amanda (Jennifer Ehle, familiar from her role as Elizabeth Bennet in the BBC 1995 adaption of Pride and Prejudice). Amanda is suffering from a terminal degenerative disease. The isolated Maud has recently converted to a rather evangelical brand of Christianity, and tasks herself with saving the soul of her worldly patient.

Amanda initially seems pleased to be the centre of the younger woman’s attention, and humours her attempts to draw her into prayer. A real friendship seems to be developing between the two. However, when Maud later tries to separate her from her other friends, whom the nurse regards as being a bad influence, and otherwise control her lifestyle, Amanda first turns against, and then openly mocks, the new Christian’s efforts. As a result, the already unstable Maud is seemingly pushed deeper into a religious mania, with horrific results.

The ‘seemingly’ in the last paragraph comes from the fact that the story is principally told throughout from Maud’s point of view, well conveyed by a tight, claustrophobic framing of scenes employed by cinematographer Ben Fordesman. Her own belief is that, having earnestly sought divine guidance, she is coming closer to God by responding to the challenges she faces in working with Amanda. The incident with the Welsh-speaking crucifix only serves to confirm this belief. The film’s dramatic climax is cut in such a way as to juxtapose Maud’s own view of herself as a powerful, angelic figure, with the terrible consequences for herself and others of the actions she has taken.

The two principal roles here are excellently cast. Morfydd Clark is centre-stage for the entire 83 minutes of the film, and is by turns vulnerable, implacable and terrifyingly vindictive. Jennifer Ehle conveys the fears and loneliness of the dying dancer, while managing to summon up the energy to be the life and soul of the party when she gathers her former friends and lovers together. The relationship between the two, which deepens as it grows, but then mutates into something tragic, is portrayed in a wholly believable manner.

The setting of the film, too, is worthy of mention. Most of the outdoor action takes place at night in a somewhat seedy, faded English seaside resort, around neon-lit amusement arcades. (Much of it was shot in Scarborough, although that town’s tourist board is unlikely to want to use the film to publicise its attractions!). Amanda is nursed in an isolated mansion on the cliffs above the town, gloomy and uninviting. She surrounds herself with posters and other memorabilia of the highlights of her former career. Maud returns to a single tiny room in a shared house, colourless and drab. The settings echo strongly the bleakness of the present-day lives of both main characters.

Rose Glass is a new director, and has produced a piece of work that resists easy characterisation. Starting as an exploration of the interlocking lives of two wounded people who look as if they may find succour in their relationship, it is by the end drawing heavily on the conventions of the horror genre – there is a scene that would not have been out of place in the ‘Omen’ movies. The film relies to a great extent on ambiguity. Exactly what happened to traumatise Maud initially is never fully explained, and the degree to which her religious experiences – experiences that feature quite extensively in the plot – are no more than psychological disturbances is left unclear.

This could easily have been a film that simply dismissed religious belief as neurosis. Instead Glass offers a more nuanced, subtle picture that recognises, for much of the time, the ways in which her new-found faith helps the scarred nurse to draw the threads of her life back together. Maud is not presented as a cartoon evangelical Christian. She seems to take evidence of Amanda’s sexual ambiguity in her stride, without initial condemnation. Even when scorned by Amanda and her libertine friends, she attracts the viewer’s sympathetic understanding rather than simply pity. Yet the outcome leaves little doubt about the danger of seemingly unbridled delusion.

Some early reviews suggested, perhaps rather tongue-in-cheek, that to watch this film is in itself a religious experience. Without going that far, it does suggest that faith needs discernment as well as fervour. Rose Glass has directed a powerful and disturbing first feature, and is a name to look out for in the future.

Manchester by the Sea