Skip to main content
Photo by Joe Athialy at flickr.com 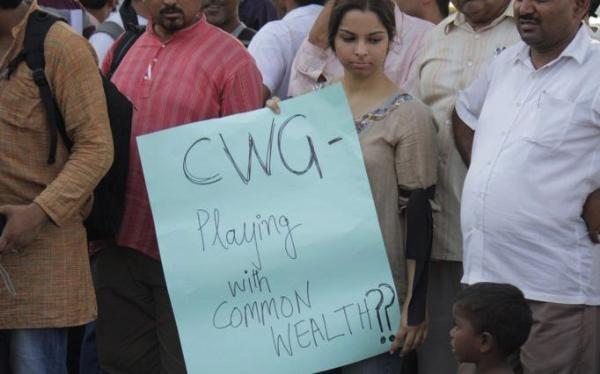 The 2010 Commonwealth Games in Delhi, due to begin this Sunday 3 October, have become the focus of international interest due to concerns over the safety and standard of the facilities and accommodation. Kensy Joseph SJ argues that India’s failure to prepare adequately for the hosting of the event is a result of a preoccupation with acquiring status symbols, to the neglect of the fulfilment of what such symbols represent.

About a year ago, the Chairman of the Commonwealth Games Organising Committee, Suresh Kalmadi, informed the world that the 2010 Commonwealth Games in Delhi would be ‘memorable’.[1] With only a few days to go before the inauguration, it already is – but for all the wrong reasons.

The litany of woes afflicting the preparations for the Games– corruption, nepotism, inefficiency, serious budget overrun, corner-cutting, a shoddy end-product, terrorist attacks and exploitation of labour (including children)[2] – could be lifted straight from an obscure Le Carré banana republic. While the risk of the Games being cancelled outright seems to have been averted and it appears as though most of the participating countries will actually send contingents (albeit without leading lights such as Olympic gold-medallist Usain Bolt), one cannot help but feel that another scandal or disaster is just around the corner. The best Indians can hope for now is that the Games go on without any further hitches.

Should India have hosted the Games?

The success of both the 2008 Beijing Olympics and the 2010 South Africa World Cup proves that developing economies are perfectly capable of hosting world-class sporting events. As the 11th largest economy in the world and the sixth fastest growing one, India had a better claim than most to host these Games. Indian companies have a proven track record of delivering quality products and services at affordable prices and, although inefficient, the Indian democratic set-up has finally been showing signs of effective government.

So where did it all go wrong?

Of course, corruption is a big part of the problem, but it is not an adequate explanation in itself. China and India score equally on Transparency International’s Corruption Perception Index[3]; yet the Beijing Olympics was universally hailed as one of the best ever held. Nor can one fault India’s political will – while the original bid was made during the tenure of the Hindu-fascist BJP (Bharatiya Janata Party)-led government, the current centrist Congress has been no less enthusiastic about backing the Games. Indeed, one cannot even point to any conflict of policy between the Central Government and Delhi’s State Government since both are Congress party governments.

Despite appearing to have the political, economical and logistical ability to host an excellent event, India has failed to meet expectations. Is there another explanation? A comparison made by no less than a Cabinet Minister of the Indian Government might not be a bad place to start.

In July this year, Indian Sports Minister, M.S. Gill reportedly tried to offer an assurance that all of the preparations would come together at the last minute by comparing the Games to a typically chaotic Indian ‘monsoon wedding’[4]. Why are Indian weddings so chaotic in the first place?

The vast majority of Indian marriages are arranged marriages (even among the educated elite): it is the parents of the bride and the groom who arrange the match. Of course, the preferences of the couple-to-be are not completely ignored (though the extent of their power to approve or disapprove of a match is usually limited outside urban circles); but an Indian marriage is first and foremost a match between two families. Of utmost importance to each of the families in question is that the other family be of equal or higher status.

The Indian worldview is predominantly hierarchical – every individual, every family, every clan and caste is seen primarily in terms of higher or lower status relative to others. Historically, status was provided by the caste system. However, the restrictions on individual mobility between castes and the prohibition of inter-caste marriages meant that the struggle for status was usually fought between sub-castes (jatis and gotras). In this struggle, status could be defined by wealth, lineage, family history and even achievements of individual members of sub-castes (the individual’s merits reflected on the sub-caste and vice-versa). Contact with outsiders, first Muslim invaders from Persia and Central Asia, then European traders and colonialists, have weakened the barriers between castes over the last five centuries, but the basic principle of hierarchy and status has been retained.

The focus of attention for Indian marriages is status and the lower-placed family (usually the bride’s) devotes all its energies to ensuring that the wedding actually does take place and the union of the two families is completed. This has the social effect of raising the status of the lower-placed family to near-equality with the higher-placed one. The most effective tool the bride’s family has for achieving this hierarchical leap is the dowry. The ability to pay an exorbitant dowry is critical to securing a marriage with a groom from a socially coveted status group. (On my recent visit to India, I was reliably informed that a newly qualified doctor from a higher caste could command a dowry of as much as 60 million Rupees – nearly £900,000 – from prospective brides of lower castes.) It is extremely common for fathers of brides to indebt themselves heavily to raise the required dowry. The severely weakened economic position is compensated for with the higher social status that is, effectively, purchased with the dowry. (For men, the corresponding currency is education and employment.)

It should be no surprise, then, that Indian weddings (usually paid for by the father of the bride) are chaotic affairs – even if they are extravagant (which lends itself to an assertion of status again). The wedding ceremony and reception are themselves relatively insignificant compared to the process of status-building – a process that depends integrally on the acquisition of status symbols.

The power of the status symbol

The marriage alliance, the dowry, the lavish ceremonies – all of these are potent status symbols in Indian society. The real power of the status symbol in Indian thought comes from its causal power to alter one’s status – the symbol is not merely a reflection of status already attained, but in fact has the power to bring about the attainment of status itself. By making one’s own a symbol associated with a higher-status group (like a caste), a lower-status family or community actually becomes part of the former.

During the colonial era, economic status symbols denoting wealth took their place alongside traditional caste status symbols such as the sacred thread. Before the liberalisation of the Indian economy in the early 1990s, common status symbols included the car, the telephone and the television. The automobile (or two), the mobile phone and the television are still key status symbols, particularly for middle-class India,[6] but as these products become increasingly affordable, more expensive variations take their place. It is not unheard of in the larger cities for girls from middle-class families to moonlight as escorts to ‘keep up with the neighbours’. Status symbols in India are truly powerful.

Putting the symbol before the status

Like its citizens, India as a nation has single-mindedly pursued status symbols on the global stage for a long time.

India has long demanded a place on the United Nations Security Council as a permanent member with veto-power. Never mind that the Security Council has been, in terms of realpolitik, largely ineffective since the end of the Cold War (look at the impotence of the Security Council in preventing the war in Iraq, or more recently, imposing any meaningful restraints on North Korean and Iranian nuclear ambitions).

In 1998, when the ruling BJP Government tested nuclear weapons, contravening international law and clearly risking the escalation of tensions with neighbouring Pakistan and China, it was acquiring what it considered to be a status symbol that was supposed to give India an equal place at the table with nations like the US and China.

A final example: earlier this year, the Indian Government announced with much fanfare the introduction of a new symbol for the Indian currency, the Rupee. This was supposed to signal India’s entry into the elite club of nations that have their own currency symbols – like the US, the UK, the Eurozone and Japan (ironically, India’s great economic rival, China, shares its symbol with Japan).

In each of the three cases, India saw a particular status symbol (Security Council permanent seat, nuclear weapons, currency symbol) associated with higher ‘caste’ nations (i.e. the developed world) and attempted to gain membership in the status group by acquiring the symbol (like the Arya Vaishyas performing the sacred thread ceremony). Put simply, the Indian Government believed the global community would accept it as a ‘developed nation’ if it possessed the status symbols typically associated with such nations.

When Beijing won its Olympics bid in 2001, India became desperate for a showpiece sporting event of its own to symbolise its desired status in the new global hierarchy. In beating the Canadian bid to host the Games, India acquired the status symbol it coveted and the chance to say to the world, ‘We have arrived’.

What the Indian Government subsequently forgot was that the causal power of status symbols in Indian society does not necessarily hold true on the world stage (a lesson that corporate India had learnt long ago). Attainment of status in the modern world depends on the end product, not the symbol; the winning of the bid to hold the Games was the beginning, not the end. This was a serious misjudgement – one that Beijing was anxious to avoid at all costs. South Africa, too, realised the need to deliver on its promise long before the clichéd eleventh hour. For India, however, it is only when it became clear that its reputation was indeed at stake, that it had not actually achieved the status of being one of the big boys, that the Government machinery pulled out all the stops. By then, it was probably too late. Major events like the Olympics, the World Cup and the Commonwealth Games do not simply bring themselves into being, even in developed countries. As Beijing proved, such events are a test to demonstrate the actual level the country is supposed to have attained.

The irony of the Delhi Games is that, in focusing on the symbol, India may have lost the status it gained with its tangible achievements over the years. And, just like a monsoon wedding, there will be a tallying of costs the morning after.

Kensy Joseph SJ has just returned from a year studying philosophy in Pune and is now studying at Heythrop College, University of London.

[6] In fact, ownership of the three is one common definition of the Indian middle class. See the Deutsche Bank report at http://www.dbresearch.com/PROD/DBR_INTERNET_EN-PROD/PROD0000000000253735.pdf

India: Religion in a Land of Contrasts