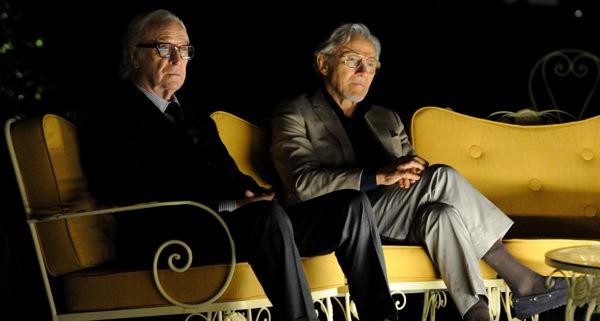 A polite thing to say when a piece of cinema does not really tell a story is that it is a statement or a meditation. Limited entirely to the environs of a lush Swiss hotel that feels more like a nursing home, Youth is a statement or a meditation on age, memory and the successes or failures of life. Written and directed by 45-year-old Paolo Sorrentino, its listless handling of these subjects strikes this viewer, at least, as more than a little pretentious if not simply premature.

Any who walked away from Sorrentino’s previous feature The Great Beauty with pleasure will probably disagree and can look forward to more of the same. Similar to its predecessor, Youth listens in on the despondent musings of a world-weary pensioner, this time octogenarian orchestral conductor Fred Ballinger (Michael Caine) on holiday with friend and film director, Mick Boyle (Harvey Keitel) and daughter-cum-personal-assistant Lena, (Rachel Weisz). The picture’s meditative progress comes mostly through extended conversations inside carefully framed shots, and if visual beauty were enough to make a satisfying film, this would probably be one.

However, most people will prefer some action beyond appetisers. Compelling drama usually means something more than static-shot recitations of all the ways an old man has failed as a father, and typically involves someone wanting something and then getting it or not. The complex negotiations, unforeseen consequences and minor defeats and victories along the way are what keep us hooked until the finish, where we hope to see a character’s deepest motivations tested and revealed.

Hence, there is generally going to be a challenge when a lead character is as apathetic as Maestro Ballinger. The imaginary world may revolve around him - Miss Universe, as in this case, may even stop by his hotel - but if it all makes little difference to him we will probably feel the same. Passive protagonists, it has been said, are often self-pitying ones, and there is a dismal kind of flatness when dramatic mourning stops short of renewed engagement with life.

To its credit, the film at least pays lip service to this idea. American actor Jimmy Tree (Paul Dano), staying at the hotel to prepare for an upcoming role, reaches a kind of epiphany along these lines. Ultimately one must make a choice, he insists, between focusing on the senselessness of horror or on ‘desire so pure and impossible and immoral and it doesn’t matter because that’s what makes us alive.’ While there is some genuine conviction in this breathless utterance, it may also be where Youth discloses its central inconsistency.

Desire as a drive that renders us alive has a lot to recommend it, and not only because unease, as Enlightenment thinker John Locke suggested, is the prerequisite for all action. The desires for food and shelter, for belonging, recognition and a hundred other intangible things move us through our daily lives, and all of these not only provide analogies for, but can also be integrated into, a man’s or woman’s ultimate desire for God. Our desires for earthly things need not be impediments to our desire for spiritual things; indeed, just the opposite: these, justly pursued, can pave the road to holiness.

Youth’s critical omission along these lines is not its aim but the means. To gaze upon beauty without desire would seem to be its ideal and may be a laudable one, but developing insensitivity through overexposure is not an ideal way to get there. There is a more traditional way to integrate sexuality and purity as well as to achieve the second youth to which the film does well to aspire. But it is a long Lenten road of self-denial, where any apparent shortcuts only arrive at age too soon.