Skip to main content
Still from The Godfather (Paramount Pictures) 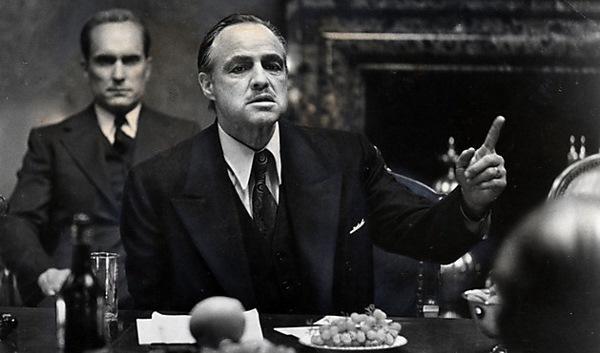 You may not think immediately of The Godfather when you hear the title ‘Wonderful Counsellor’ in the passage from Isaiah that is read at Midnight Mass on Christmas Day, but James Crampsey SJ suggests that the association can help us think about what that title means. The one who holds it helps us to ‘recognise the power of God at work in our world in others and in ourselves.’

Read 'A child by any other name': the introduction to our Advent series. Read >>

I was in Boston on 13 March 1996. I was sitting in a chair reading when I heard the news of the Dunblane massacre. I could not believe it. Not only did I have that inability to accept the unspeakable, I was doubly loth to accept that something of that nature could have happened in my Scotland, of all places.

Two days later, my journey took me to Toronto and while walking down the main street, I saw a huge grizzly of a man picking me out and coming towards me. I guessed that he was going to ask me for money and as he came close, I started my deflecting speech. I had barely spoken two words when he recognised my accent and said, ‘Aw Scottie, all those kids!’ And he gave me a bear hug. Here I was on the receiving end of the compassion of a man I was desperately trying to avoid.  It was the first glimmer of light for me in that terrible darkness. Later that same year, that incident came back to me as I was preparing the Christmas homily I was preaching at Midnight Mass at St Aloysius in Glasgow.  And ever since then, Christmas always truly begins for me when I hear: ‘the people who walked in darkness have seen a great light’ because it reminds me of that first moment in which it seemed as though the darkness of Dunblane might lift.  This phrase begins the segment of Isaiah 9 which delivers the quartet of names among which is ‘Wonder’ or ‘Wonderful Counsellor’.

It was in that same church that I had learned to sing Palestrina and Vittoria, but not Handel. I could sing some of the choruses from his Messiah, but not ‘For unto us a child is born’, which bursts with sound into the titles: ‘Wonderful Counsellor, Mighty God, Everlasting Father, Prince of Peace’. Although I can’t recall its name, I remember seeing a film with some children, radiant with smiles, riding bikes to the soundtrack of this chorus. Their faces are lit up from within, in an unconfined and irrepressible joy. The first title has two words – Wonderful Counsellor – but what I heard initially was, ‘Wonderful, Marvellous’. As I sang along, someone kindly pointed out my mistake.  There is a question about how the two words go together, and I’ll come back to that.

Another mistake I used to make was the confusing of ‘councillor’ for ‘counsellor’. The difference may be that the role of the first is very public while the role of the second is often private and discreet.  The latter role is one we might be familiar with from The Godfather films. One of the important functions in these Italian families is that of the consigliere, the ‘counsellor’. Curiously, the consigliere to the Corleone family, Tom Hagen, is of Irish origin, though brought up in the family; maybe there is something about him having a different background that makes him a good consigliere. But in a very dramatic moment, he is dismissed: ‘You’re not a wartime consigliere’, he is told to his utter dismay. The word that goes before ‘counsellor’, then, is important. The coded expression for a blood-spilling war among the families is, ‘going to the mattresses’, so we are to understand ‘wartime’ as a time of deprivation and restriction, not a time of generosity and expansion. Confidentiality and discretion are what we would expect from someone who is conventionally described as a ‘counsellor’, but this is a time of secrecy rather than confidentiality, of omertà rather than just discretion.

Another confusion that might be made is that between ‘counsellor’ and ‘consoler’. Curiously, what unites these two words is the Holy Spirit: called ‘the counsellor’ in John’s Gospel, it also often has the role of removing the sadness brought about by Jesus’s departure. The Holy Spirit is the ‘best’ consoler in the ancient and beautiful hymn, Veni Sancte Spiritus.

There is a lovely verse from Psalm 16 that springs to mind as well:

I bless the Lord who is my counsellor, even at night my heart instructs me.

I keep the Lord before me always, for with him at my right hand, nothing can shake me. (Psalm 16:7-8)

To understand God as counsellor, we need to look at that phrase, ‘even at night my heart instructs me’. Despite the world of darkness, I am illuminated by the way God touches my innermost processes; I am lit up from within like those children on the bikes in the film whose name I can’t remember.

There is another field of biblical language to express being ‘lit up from within’ and it is the language of transfiguration.  The accounts of this incident appear in Mark 9:1-9, Luke 9:27-36 and Matthew 17:1-9; and it is also referred to in the second letter of Peter (1:16-19).

‘For unto us a child is born, unto us a son is given’, reads our text from Isaiah.  When we hear the voice from the cloud saying, ‘This is my Son the beloved’ in the account of the Transfiguration, we are hearing the same thing from a different perspective.  In Isaiah, we perceive something, while in the Transfiguration, God reveals something for us to receive.

The reflection on the Transfiguration in 2 Peter is studded with words about light:

For he received honour and glory from God the Father when that voice was conveyed to him by the Majestic Glory, saying, ‘This is my Son, my Beloved, with whom I am well pleased.’ We ourselves heard this voice come from heaven, while we were with him on the holy mountain. So we have the prophetic message more fully confirmed. You will do well to be attentive to this as to a lamp shining in a dark place, until the day dawns and the morning star rises in your hearts. (2 Peter 1:17-19)

‘Glory’, ‘a lamp shining in a dark place’, the day dawning, the rising of the morning star: all these images are of the triumph of light over darkness. The account of the Transfiguration tells us how the glory, the light of God, gathers in the Son.  It also opens up the possibility that all human beings can be divinised; that the morning star can rise in our hearts.

What, then, can ‘Wonderful Counsellor’ or ‘Wonder Counsellor’ mean? The first combination is easier to understand because it gives us an adjective followed by a noun. The second formulation gives us two nouns. Are they parallel in meaning? Or are they words which, when put together, limit one another’s meaning? A ‘wonder’ or ‘marvel’ is usually something like God’s mighty deed, even something like the Exodus. Maybe we get the flavour of it in the Psalms: ‘What marvels the Lord worked for us, indeed we were glad’ (Psalm 126).  It is something, or some characteristic and trusted action of God, for which we give thanks.  A trusted or faithful action of God is something that could be repeated: the psalm continues, ‘Deliver us, O Lord, from our bondage, as streams in the Negev.’ Could there be a second Exodus?  At the same time, as Richard Clifford points out, ‘the psalm sees glimpses of power in little things, such as a family returning home.’ (Psalms 73-150 [Abingdon: 2003, p. 237]).

Does this help to define the meaning now of ‘Counsellor’, the one who is able, in conversation with another or others, to help detect the power of God at work? The Counsellor or Paraclete in the Fourth Gospel is the one who sees the bad spirit at work (the evil instinct) and brings it into the light in a way that both convinces and convicts.  In the same way, this consoler and discerner perceives the power of God at work in the good instinct in human affairs and helps us to recognise it as ‘wonder’, as God’s powerful work. ‘When the Spirit of truth comes, he will guide you into all the truth’ (John 16:13).

The Wonderful or Wonder Counsellor, then, is the one who by his or her silence, discretion and discernment is able to illuminate us, light us up from within, transfigure us in such a way that we recognise the power of God at work in our world in others and in ourselves. The Son who has been given to us, in his dying, hands over the Spirit (John 19:30). ‘Likewise the Spirit helps us in our weakness; for we do not know how to pray as we ought, but that very Spirit intercedes with sighs too deep for words. And God, who searches the heart, knows what is the mind of the Spirit’ (Romans 8:26-27).

I am writing this in the immediate aftermath of the Paris attacks, another massacre which has plunged the world into gloom. I hold on to that line from the Prologue of John’s Gospel: ‘The light shines on in the darkness, and the darkness cannot repress it.’ As the darkness tries to enfold us, may the Wonder Counsellor light us up from within.

A child has been born for us