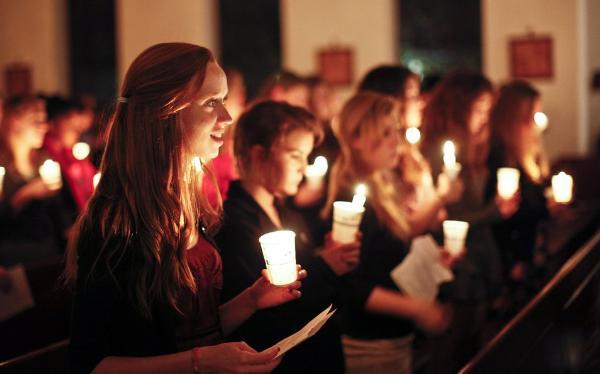 How do our Advent hymns and the context in which we sing them both reflect and shape the character of the season? Musician, Ian Coleman urges us to read the Book of Revelation through a liturgical lens to see in it a rich description of ‘the great Cosmic liturgy’ that we try to express through our Advent hymnody, a liturgy in which Christ is always and already present.

How are you with the End Times? What do you feel about the Rapture? The chances are that, if you understand what I am talking about, you will either have a keen interest in the book of Revelation as an actual book of prophecy, or be a decidedly sceptical bystander in the face of this concluding, divisive and puzzling section of the New Testament.

For many throughout Christian history, the Apocalypse, to give Revelation its original Greek title, has been either the life-blood of their day-to-day beliefs or a source of much bewilderment; it seems hard to be neutral about it. From the very earliest times certain Christians have attempted to read the text of this vision, given to and written down by John, as referring to a more or less imminent future, seeing the rich collection of signs and images contained in it as enigmatic messages, which, if read correctly, could give a clue not only to their own lives of faith but to the whole shape of human history. Hence the vital import of these ‘End Times’ and the necessity for earnest debate as to the sequence and timing of supposed future events, such as the Rapture, when the servants of God are to be taken up to their eternal reward – while, of course, the rest of the world is put to the sword and to fire.

For others, perhaps the majority of mainstream Christian believers, the lurid and compelling narratives of John’s vision have been utterly confounding and, more recently, embarrassing. How could such a naive, not to say vicious, book ever have found its way into the canon of Holy Scripture?[1] And how can we make ourselves such hostages to fortune as to actually believe in the reality of these Nostradamus-like prophecies? Harold Camping, who firmly predicted the coming of Christ to bring about the End Times on Saturday 21 May 2011, is only the latest in a woeful series of would-be harbingers of the End who have made themselves and those who believe them look foolish and deluded. Is John’s work not yet another example of this regrettable human trait?

I believe that the only rational reading of the Book of Revelation is a liturgical one, as was John’s main reason for writing it in the first place. It is easy, in focusing on the visions of the End, the letters to the Seven Churches of Asia and the details of the apocalyptic style, to miss the fact that the Book is utterly suffused with liturgy, both in its incidental imagery and in descriptions of actual liturgy. This is the principal difference between John’s work and the Jewish apocalyptic literature – notably Ezekiel, parts of Isaiah, and the books of Enoch – that preceded it. Certainly John had visions of destruction, and this destruction is actual and effective – probably as much the destruction of the Temple cult in Jerusalem as the overthrow of Rome. But he situates all these actions of human and divine history within the context of a vast liturgy taking place beside a sea of glass; a liturgy to which he is a witness and a liturgy that has Cosmic significance.[2]

Two phrases make their first entrance into Christian history in the Book of Revelation: the first is ‘Alleluia’, the great signifier of Temple worship, now transposed into a complex antiphonal hymn at the destruction of ‘Babylon’[3]. The second is ‘The Lord’s Day’ , which is often taken to mean ‘Sunday’ and thus held to be the earliest proof of Christian worship taking place predominantly on this day. It is nothing of the sort, but it is something even more important. When John says, ‘I was in the Spirit on the day of the Lord’, (en tē kuriakēēmera)[4], he means, ‘the day of the Lord’s coming’, as understood from the Prophets (e.g. Isaiah 13:9 or, most famously, Malachi 3:2) – the day of judgement, of the return of the Lord. This is not so much ‘Sunday’ as ‘the reason for Sunday.’ Not simply the day that Jesus the Christ rose from the dead, but the Eighth day of Creation, the fulfilment of Day One and the day without end. It is, in fact, the Octave, in its true liturgical meaning (and, perhaps, even its musical one, in origin)[5]. This is the first clue, right at the start of the book, that we should be reading it liturgically, not as mere apocalyptic, let alone prophecy.

Advent, of course, has exactly this shape. It is the first season of the Church Year, like Day One. But it has also always had the character of the End Time, the eschatological. We dutifully proclaim this, year by year, and attempt to make worthy (and no doubt salutary) efforts to be spiritually ready to welcome Christ the Bridegroom, at whatever hour of the night he may return. The classic, wonderful hymnological text for this sentiment is ‘Wachet Auf!’ (‘Wake, O wake, with tidings thrilling’) by Philipp Nicolai, set so memorably and exaltedly by J.S.Bach in Cantata 140. And yet, we fail to note that He is here already! Perhaps influenced by the incontrovertible Protestantism of ‘Wachet Auf’, we neglect the sacramental reality of Christ on altar and tabernacle; perhaps we feel that this Real Presence is too familiar. We long more for the great eschatological coming portrayed by John’s sweeping imagery; we long – yes, let’s admit it – for the Rapture, we long to be rapt. But John, surely, tells us that this is the liturgical reality anyway: our Sunday Mass is already the liturgy of the Eighth Day, of Day One of Creation thrown open, as the writer of Hebrews makes clear, by Christ, who went into the Holy of Holies and sprang forth again, like the Bridegroom from His chamber.[6]

The character of our most familiar Advent hymns is a decidedly Protestant one – or rather, it is one founded on a reading of Revelation which neglects the aspect of Christ’s liturgical and sacramental Presence here and now. ‘Lo, he comes with clouds descending!’, another great and momentous text, concluding in the ecstasy of ‘O come quickly... Alleluia, come, Lord, come!’, could hardly be more faithful to the message and imagery of Revelation: it is practically a poetic paraphrase. But do we see often enough the parallels between it and that other spine-tingling text from the ancient liturgy of St James: ‘Let all mortal flesh keep silence’, in which the clouds are actually the clouds of incense at the Eucharist, in which the smoke that filled the Temple at the Shekinah, at the presence of the Lord, is once again there at the throwing-open of the Holy of Holies? We still look ahead, to the future, as we sing this song – can we not rather see it unfolding at each Consecration, today?

The greatness of John the Baptist, celebrated in the hymn, ‘On Jordan’s bank’, lay in his ability to recognise the historical Jesus as the Christ of God. Yet again, though, when we sing, ‘Then cleansed be every Christian breast, and furnished for so great a guest’, we still look (is it wistfully – is it even guiltily?) to that great future. We unconsciously place ourselves in the Baptist’s sandals, as if Christ were only newly present on earth and not earth-shatteringly present in the Mass; and, indeed, as if that cleansing were not already accomplished by our own Baptism, a Baptism not of repentance like John’s, but of regeneration into the new Creation, that of the Eighth Day.[7]

Of course, towering over these and over other great, worthy, but perhaps only partial Advent acclamations (one thinks of Graham Kendrick’s ‘Make way’, Bernadette Farrell’s ‘Advent Litany’ and others) is the shadow of the ‘O Antiphons’, most familiar from, ‘O come, O come, Emmanuel’ but also paraphrased in Marty Haugen’s ‘My soul in stillness waits’. These short, potent texts, addressing Christ in various parallels and attributes (‘Key of David’, ‘Morning Star’, ‘Wisdom’) certainly seem to fall into the category of future longing: each ends with ‘Veni’ – ‘Come’, an acclamation that, once more, has its liturgical origin in Revelation and is echoed in other texts such as, ‘Come, thou long-expected Jesus.[8] But, theologically, they are more complex, precisely because of their liturgical context. Never intended as Mass-chants, they are the antiphons for the Magnificat at Vespers on the days (conventionally seven, of course, making the Nativity the Eighth Day) leading up to Christmas. They thus track the last hours of Mary’s pregnancy, since the Magnificat is her song. But they also mirror effectively the role of the Liturgy of the Hours by comparison with the Mass. As Alexander Schmemann pointed out brilliantly, the Liturgy of the Hours, of which Vespers is the pinnacle, is a way of sanctifying the time of our lives, but Mass lies outside of all Time – again, the Holy of Holies is thrown open by Christ. The Mass is the Eighth Day to the conventional week of the liturgy of the Hours.[9] The slight mis-match between texts like the ‘O antiphons’ and what Schmemann terms the kairos, or unique momentof the Mass should, once again, alert us to the fracture between our English hymn-repertoire and the structural demands of the Mass-Propers. In using hymns, no matter how appropriate and inspiring, to replace the Proper texts and chants, we nudge our liturgies away from the kairos of the Mass. This does not create an unbridgeable gap, it is true, but it is as well to remind ourselves that the gap exists.

So if, like me, you look forward eagerly not just to Christmas and all those carols but also to renewing your acquaintance with the profound and powerful hymns of Advent, please, as a complement and, perhaps, corrective, re-read the book of Revelation. Try not to get hung up on the details of this or that event or this and that prophecy; try not to be scandalised by the undoubted violence and extremism of some of the imagery. Instead, place yourself with John, the enthralled and enraptured witness of a rich and strange liturgy. Certainly it is no earthly liturgy, and not one we would feel ourselves able or worthy to leap into and play our part in. But, as a means of expressing the great Cosmic liturgy, into which our homely Sunday Mass and our renewed Advent open, like the great West Door of an eschatological cathedral, it will serve to re-centre you on Christ, the mysterious, elusive, all-powerful One who ever comes.

Ian Coleman is Director of Musicat the Church of St Anselm and St Cæcilia in Lincoln’s Inn Fields, Central London, and Chair of the Music Committee of the Diocese of Westminster Liturgy Commission.

[1] The Council of Hippo in 393 AD finally admitted Revelation into the New Testament canon; in 363, the Council of Laodicea had pointedly omitted it.

The Word was with God