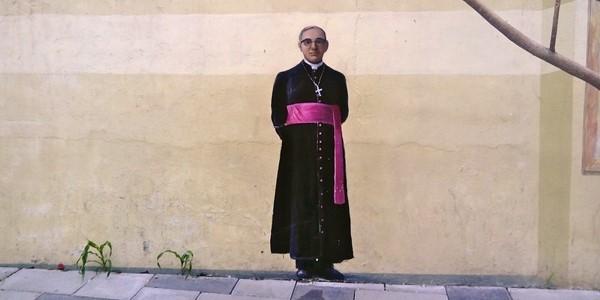 In a homily to mark the anniversary of the birth of St Oscar Romero, Bishop Nicholas Hudson considered how the martyred Archbishop of San Salvador used different elements of the gospel accounts of the Transfiguration as lenses through which to reflect on the situation of the people he served. ‘The force of St Oscar’s reflection on Transfiguration is that the process of our own changing needs to begin in the here and now.’

That image we all know so well of St Oscar with blood streaming from his nose and ears is of a man transfigured, transfigured by justice. Of course, he’d seen it coming: ‘In El Salvador, the sky has turned red,’ he had said. ‘Putting ourselves on the side of the poor is going to mean a lot of bloodshed.’ That was on the Feast of the Transfiguration in 1977, some two and a half years before he himself made the supreme sacrifice.

The same road as Rutilio

He’d already said to Fr César Jerez, Jesuit Provincial, as they visited Rome together: ‘When I saw Rutilio[i] dead, I thought, if they killed him for what he was doing, it’s my job to go down that same road.’ This testimony of Jerez I find particularly moving, coming as it does just months after Rutilio’s death. ‘Monseñor, you’ve changed,’ Jerez told him as they walked along. ‘Everything about you has changed. What’s happened?’

The archbishop halted and was silent: ‘I ask myself that same question when I’m in prayer,’ he said. ‘It’s just that we all have our roots, you know,’ he went on. ‘I was born into a poor family, I’ve suffered hunger … When I went to seminary (in Rome) … I started to forget where I came from. I started creating another world … they made me the bishop’s secretary in San Miguel … then they sent me to Santiago de María, and I ran into extreme poverty again. Those children were dying just because of the water they were drinking, those campesinos killing themselves in the harvests … And what happened to Fr Grande … You know how much I admired him. When I saw Rutilio dead, I thought, if they killed him for what he was doing, it’s my job to go down the same road … So, yes, I changed. But I also came back home again.’

The figure lying dead on the floor of the Hospitalito chapel two years later is indeed the figure of a man who has come home. He’s already being received into the place prepared for him by Christ since before the beginning of time; a man of the poor who allowed himself to be transfigured by the cry of the poorest for justice. It’s surely no coincidence that it was on the Feast of the Transfiguration every year that he made some of his most heartfelt pleas for justice as Archbishop of San Salvador because this is the feast not only of Christ’s glorification but also the patronal feast of El Salvador. As death loomed, he was clear that he would be dying not just for the Church but for the nation: ‘I offer God my blood for the redemption and resurrection of the people of El Salvador … for the liberation of my people,’ he said just a few days before he died.

The Christ of today’s gospel [Mark’s account of the Transfiguration (9:2-10)] reveals to his friends what his – Christ’s – homecoming will be like too; how he too will be totally transfigured, with clothes dazzling white, whiter than any bleacher could make them. While from the cloud a voice is heard; it is the voice of the Father, saying, ‘Listen to him’.

‘Listen to him’: this was a command which St Oscar amplified continually. The last year he would be alive to celebrate the Feast of the Transfiguration, he told the people, ‘our duty is to listen to him … listen to the voice of the Father.’ He developed the point to say, ‘Every year the divine transfigured One comes to challenge this people with the words, “What have you done with my mystery? Am I not bringing about the transfiguration of this nation?”’ The pastoral letters written for the Feast of the Transfiguration of 1977, ‘78 and ‘79 contain some of his most powerful appeals for the rulers of the nation to change. That they must allow themselves too to be transfigured by justice was his conviction and deepest yearning.

So central is the Transfiguration story to our faith that it’s found in all three of the synoptic gospels. The sum of these accounts amounts to a significant number of elements. These different elements St Oscar uses to explain what is happening to the people: judgment, light, listening, following, clothing, glory.

Yes, judgment, as he explains in the most developed of his four pastorals, the third pastoral, for the Feast of the Transfiguration in 1978. There he explains that the words of Jesus, ‘Don’t tell anyone what you have seen until the Son of Man has risen from the dead’, indeed refer to judgment, to how the humbled shall be glorified and rise with the Son of Man while at the same time all creation witnesses the humiliation experienced by the servant of Yahweh.

Judgment. And light. I wonder if you’ve ever noticed how often St Oscar speaks of light.

From the Transfiguration specifically he draws the image of the light radiating from Christ needing now to be carried by the Church to shine on the lives of all men and women across the nation. ‘The Church is a lamp that must shed light; and it must involve itself in concrete realities in order to enlighten those who are pilgrims on this earth,’ he writes in 1978. The obligation to shine this light on concrete realities is something he takes to himself as early as November 1977 when he preaches a homily which condemns a new law allowing the detention of suspects for participation in a forbidden activity. He says, ‘in the light of God’s word, I … have the right and the duty to cast light on this event in our land’.

In another place he suggests that ‘the illumined face of Christ is like a pilgrim’s compass showing them they are on the right path.’ I like the fact that he’s clear the light of Christ is a light needing to shine on Christians of every class and state of life – that no one should consider themselves exempt, in other words, not least the poor. Even the poor must scrutinise their lives in the light of the gospel. For poverty isn’t just about lacking things, he says; it’s a call to be grateful, grateful for the little you have.

Because they will have put on Christ, as St Paul would put it. St Oscar says as much on the Feast of the Transfiguration in 1978: ‘Those who will one day be the holy people of the Most High … are a people close to Christ; we could almost say they are Christ’s clothing.’

Of course, in showing himself transfigured, Jesus had a dual purpose. He wished to prepare his friends, so as to give them hope when they saw him suffer; he wished too to show how they would also be changed themselves. This dual purpose is confirmed, as we shall hear, by the Preface for the Feast, when it says, ‘he revealed his glory … (so) that the scandal of the Cross might be removed from the hearts of his disciples and that he might show how in the Body of the whole Church is to be fulfilled what so wonderfully shone forth first in its Head.’ But the force of St Oscar’s reflection on Transfiguration is that the process of our own changing needs to begin in the here and now.

Many, many years before, St Oscar had written, while writing his dissertation, ‘In recent days … the Lord has inspired in me a great desire for holiness. I’ve been thinking of how far a soul can ascend if it lets itself be possessed entirely by God.’ Well, it was a long road – but one which would allow him to say, as journey’s end was at last coming into view, that martyrdom was a grace which he knew he didn’t merit but that, if God accepted the sacrifice of his life, his prayer would be that his death be offered for the liberation of his people and a testimony of hope in the future. He was saying, in other words, that, in spite of his fear, he accepted. He accepted that to ‘be possessed entirely by God’ meant he too must take the same road now as Rutilio Grande, Alfonso Navarro, Octavio Ortiz, and so many other martyrs, to walk faithfully and humbly and in the footsteps of his Lord and theirs; and allow himself to be fully transfigured by justice. Would that we allowed ourselves to be possessed even a tenth as much!

Rt Rev Nicholas Hudson is Auxiliary Bishop for the Diocese of Westminster.

The text of this article was delivered as a homily at the Mass to celebrate the 104th birthday of St Oscar Romero in St George’s Cathedral, Southwark, on Saturday 14 August 2021. You can watch a recording of the Mass, and read the Pastoral Letters of Archbishop Romero, on the website of The Archbishop Romero Trust.