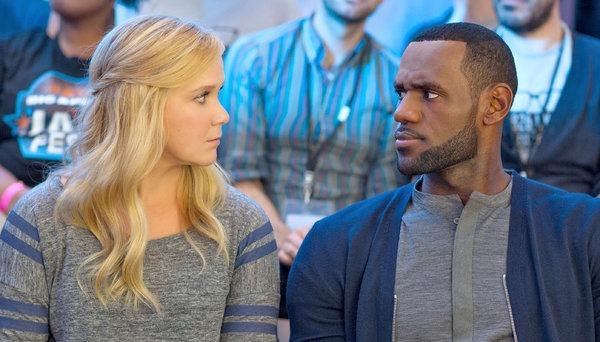 Two little girls sit on the hood of their dad’s vintage pickup truck as he tells them about his upcoming divorce. If you could only play with one doll for the rest of your life, how would you feel?, he asks. Sad, they respond. Exactly, he continues. Then, to the sound of their obedient recitation of ‘Monogamy is not realistic’, we flash forward twenty years.

Welcome to the world of Amy Schumer, stand-up and sketch comedy sensation, where sex is a toy and relationship trauma is served with sugar on the rim. Trainwreck is her first feature film, and as she regularly does in her comedy, Schumer writes and acts as a character that shares her name. If this suggests that the line often blurs between fiction and reality, it does, and at a basic level, the humour seems to hang upon the disappearance of boundaries. What we get is Amy, unmentionable warts and all.

Boundaries are ignored in multiple senses in a script whose humour is consistently the antithesis of tasteful. Reservations of propriety common in polite discourse are flouted with an abandon less akin to recklessness than oblivion. Not much can be said along these lines without getting into the particularities of what happens behind closed doors. Let it suffice to say that if, as has been said, sex is the most fun one can have without laughing, staging gaffs in the sack is not always a guarantee of either.

The plot of Trainwreck follows the learning curve of a fashionable party girl with a pathological fear of commitment. When she interviews a high profile sports physician, Dr Aaron Conners (Bill Hader), for her New York magazine, it is no great surprise that she soon ends up in his bedroom. The odd thing for her is that she stays overnight. And the rest, as they say, is romantic comedy.

The plot shakes a little when it attempts to get serious about the trainwreck existential condition of its protagonist, but overall the film has some memorable moments. A few of them are even suitable to repeat. Basketball superstar and multimillionaire LeBron James plays a dreamily romantic version of himself who splits the bills at lunch and consistently steals the scene. When Amy appears to be getting serious with his friend, for instance, LeBron asks her deadpan about her intentions with Aaron and whether she hears his name in the wind. Also, when Aaron appears to have given up on the relationship, LeBron stages an intervention, speaking from the heart as a sports announcer nearby provides play-by-play commentary.

The most striking thing about the film, though, is probably the nonchalance of its avant garde femininity. Urban, fashionable and privacy-free, Schumer occupies tomorrow’s world today. She represents a particular version of the modern self – single, moderately successful, ‘clever but not too clever . . . approachable’, as her boss puts it. And while she is more frank and visceral about her sexual exploits than most of us, she speaks in a voice we also somehow recognise, whether we like it or not.

In a phrase, Schumer is consummately articulate on behalf of what might be called the professional everywoman. Without a sexual revolution, for better and worse, we might never have heard of her, her serial promiscuity or the charmingly chilled out way she has of sharing it with more or less anybody. But ours is a world where any of us can press an ear to the door of her big screen bedroom, and many of us, for better and worse, will. The modus vivendi Schumer relates is ours, in one way or another, and while it will not in the foreseeable future win any prizes for beauty, perhaps there is always something like an honourable mention for sincerity.