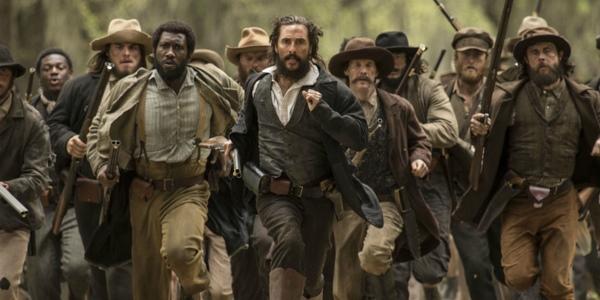 In 1862, tired of war, tired of death and tired of helping rich landowners defend their wealth, Newton Knight, a medical orderly in the Confederate Army, returns home with the body of his son. Wanted for desertion, he finds refuge from his pursuers in a Mississippi swamp with a group of runaway slaves. As the war drags on and hopes of a Confederate victory plummet, he is joined by more and more disaffected soldiers who have returned home to find their families being forced to supply the nation’s army from their own inadequate provisions.

Free State of Jones follows Knight from his desertion to his establishment of an armed rebellion within the Confederacy and through the difficult years of Reconstruction after the war. A natural leader and a man concerned for the welfare of his neighbour, Knight’s energies and intellect turn first to helping the poor farming folk of Jones County, Mississippi in their struggle against the tyranny of the Confederate Army’s rapacious quartermasters, and then to improving the lot of the black freedmen. A man of firm convictions and a determined character, defending those convictions and the rights of his neighbours comes as easily as breathing to Newton Knight. We never see him waver in indecision or struggle to make the right choice. He is a man constantly at odds with the prevailing mindset of the surrounding culture.

Yet Knight is a bit of an incongruous character. His courage and convictions come from a strong faith rooted in the Bible and in Christian truth, but his violent manner of acting on his faith, sometimes bordering on vengeance, is at odds with those same Christian truths regarding the dignity of man that led him to action in the first place. Newton Knight is not a saint but a hero, the sort of hero who never hesitates or doubts but always backs the right cause, selflessly defending the small folk against oppression by the rich and powerful. Of course, it helps that his adversaries are portrayed as the worst of humanity. Confronted with cruel, arrogant officers and selfish, greedy plantation owners, it is a wonder that any person could have supported the Confederate cause.

The African slave trade is a foul stain on the history of humanity and one that continues to have repercussions in the lives and politics of the American people. The hurt and the shame of that affront to the dignity of the human person are embedded in the American consciousness, and there is still a struggle to come to terms with and atone for the suffering and the sins of the past. For this reason, the slavery, emancipation and continued oppression of African Americans are topics that continue to find expression in American films, which function as a sort of communal memory and catharsis. Free State of Jones provides a longer perspective than most: rather than ending with the emancipation of the slaves and a national pat on the back, it continues through the vacillations of the Reconstruction period when the freedom of blacks was revoked in all but name, when they were forced to work again for their former owners and subjected to the terrors of the newly formed Ku Klux Klan. In addition, the film reaches even further, to a trial in the 1940s when one of Knight’s descendants ran afoul of Mississippi’s stringent race laws which enforced the inferior status of its black population.

This film is very timely considering the recent ferment in the United States over the disproportionately harsh treatment of blacks by the police and the tragic killing of innocent men. But it also reaches beyond the American experience to reflect on the nature of slavery, by not only considering the lot of the black American before and after slavery but also by juxtaposing two types of men: the poor white soldier who is free and risks his life for the profit of the rich, and the black slave who ‘only picks his cotton’. Pope Francis often speaks out against modern forms of slavery, especially forced labour and human trafficking, but he also reminds employers, in the spirit of Catholic Social Teaching, that they are responsible for the humane treatment of their employees. As Pope St John Paul II makes wonderfully clear in the beginning of Love and Responsibility, the root of the problem is our desire to use one another as objects rather than as people and in a way that respects the humanity of the other. While we can look back on the past and wonder how any Christian could ever excuse the institution of slavery, we should also remember that the potential to use people as objects, as slaves, exists in every relationship in our own lives.

The attempt to provide greater context and a deeper understanding than is found in many films of this genre is ambitious and commendable, but this very ambition is the film’s undoing. It is simply too long and too complex a period to condense into a film running to just over two hours. While it starts as a fairly interesting, conflict-driven drama, it gradually devolves into something which feels much more like a docudrama, jumping through history with panels of text to keep viewers up to speed. To its credit, the film focuses not on the legal and political wrangling that caused the events but rather on the human impact of the gross injustices of the period. The story would have been better told in a longer format; as a film, there is just no time to tell the story fully or to develop any of the characters or their relationships, not even Knight’s bizarre marital situation. In the end, it feels like a rather rushed history lesson about an interesting, little-known incident in a well-known and frequently dramatised period of American history.