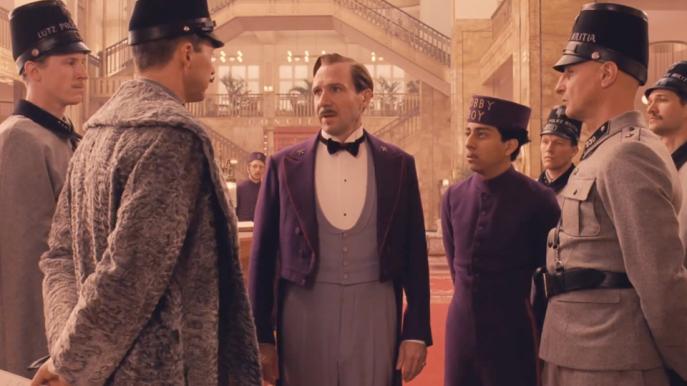 The Grand Budapest Hotel tells the story of a celebrated author, played by Tom Wilkinson, who has written a successful novel based on the events recounted to him by an older stranger in an empty hotel some decades earlier. That stranger is Zero Moustafa, who shared with the author (played in his younger days by Jude Law, with typical, suave coolness) his coming-of-age tale. This premise moves us from the present day to 1930s Eastern Europe and the titular hotel.

Once there, we begin to witness the madcap adventures of Gustave H., the legendary concierge at the hotel. Gustave is brought to life with gusto by Ralph Fiennes, who is on fire in this brilliantly realised part. He drives the story, mines its heart and brings its most sharply-observed laughs. The youthful Zero Moustafa, played by newcomer Tony Revolori, is the lobby boy who becomes Gustave’s most trusted friend. Together they become embroiled in fraud, faux-Fascism and frantic frolics, and the film rolls along through a catalogue of insane and hilarious set-pieces.

Gustave’s philandering lands him in deep water when a ‘friend’ passes away, leaving him a priceless work of art. From that moment on, Gustave’s world is turned upside down as he is chased by Willem Dafoe’s vicious henchman Jopling, Edward Norton’s comical Colonel Henckels and Adrien Brody’s brilliantly unhinged Dmitri. Along the way, Zero and his fiancée, Agatha (Saoirse Ronan), attempt to help Gustave clear his name. And throughout all this, the likes of Harvey Keitel, Jeff Goldblum and Bill Murray – to name but a few – all manage to make brief but memorable cameos.

A quick recap of the performers’ names might prompt you to wonder how astronomical the casting agent’s phone bill must have been. But this is what we have come to expect from director Wes Anderson, the king of off-beat, cameo-heavy comedy-dramas, and his latest film is close to being the cream of his crop. It has all his usual trademarks in spades. Inspired by the works of Stefan Zweig, the literary core to the film serves as an explanation for the story-within-a-story-within-a-story framework of the narrative. While in anybody else’s hands this could seem too convoluted, Anderson’s idiosyncratic talent ensures that the complexity is underscored by a clever comedy.

Quite apart from the on-screen talent, and typically of Anderson, the technical side of the film is excellent. Anderson’s long-term collaborator Robert Yeoman brings some sumptuous and clever cinematography to the table. Especially impressive are the different framing and aspect ratios of each part of the story. This technique allows the audience to have a simple, subconscious way of understanding where exactly they are within the narrative at large. The production design of Adam Stockhausen is beautiful and rich, announcing each new set along the way imaginatively and boldly. And perhaps the standout contribution to helping the story flow seamlessly is Alexandre Desplat’s music: punchy, pacey and precise, the score sets the tone for each beat of the film effortlessly.

The Grand Budapest Hotel really is a triumph of effective comedy-drama. Some genuine laugh-out-loud moments are coupled with a true heart that makes it an extremely enjoyable journey. The actors are at the top of their game, and the technical aspects add the extra layers to ensure that this is another quality addition to the Wes Anderson canon.