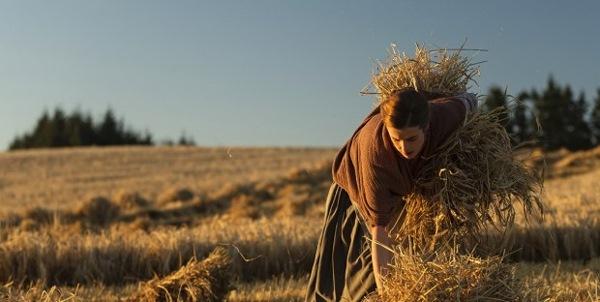 One of the best things about moving past the testosterone-driven franchise films of summer into the more thoughtful film fare of year’s end are the opportunities we get to see a wide range of incredibly gifted actresses – Carey Mulligan (Suffragette), Saoirse Ronan (Brooklyn), Emily Blunt (Sicario), and Cate Blanchett and Rooney Mara (Carol) to name just a few – take the wheel, plant a heeled foot of their own on the accelerator and show us what they’ve got.

So I went to a screening of Terence Davies’s new film, Sunset Song, with high hopes. The movie has at its centre a bright-eyed protagonist named Chris (played gracefully by Agyness Deyn) whom we see come of age in the rural Scotland of the early 1900s. She’s a curious and intelligent young woman, passionate about the land that makes up the rural community of Kinraddie, where she’s spent all of her life. It’s a challenging world to grow up in, even more so for her beleaguered mother and brother, both of whom suffer greatly under the lash of Chris’ oppressive father. Emancipation for the three of them is long in coming and takes different forms in each case when it does. But peace never lasts long in European tales that unfold where the black clouds of the First World War loom, throwing long shadows over the lives of characters with no idea how bad life is about to get.

Davies, a British director who turned 70 this year, has made a career of crafting intimate, slow-moving and artful films like The House of Mirth (2000) and The Deep Blue Sea (2011). If any of those adjectives appeal to you, this may be your ticket. Here Davies directs his own adaptation of the 1932 classic Scottish novel by Lewis Grassic Gibbon, although he might have benefited from the assistance of a more judicious screenwriter. While the film is both lush and lyrical – interior episodes are shot digitally while the 70mm film used outdoors makes the scenes that take place there a feast for the eyes – it’s not long before you may find yourself wondering what the movie is actually about. The experience can feel like moving through a series of tasteful galleries in a museum: not a single candlestick beside a bed is ever out of place, but after an hour, if nothing has jumped off the wall and grabbed your attention, you may be feeling ready for your lunch. Deyn and the company of fine actors supporting her seem up for what’s been asked of them, but in the end that doesn’t feel like much: grieved posturing, ponderous gazes off into the middle distance and a slow parade through mostly dreary days, all of which adds up to a rather gloomy affair. Even the bells of war, when they finally sound late in the film, do little to clear the narrative haze, as Chris’ new husband is conscripted into service only to return for a home visit as a baffling and altogether different character.

No doubt the historical details enrich the novel (a scene where Chris’ wedding is interrupted by the new year and the assembled guests breaking into ‘Auld Lang Syne’ is surprising and poignant), but they don’t add up on their own to crackling drama. The intermittent prosaic voiceovers are intended to rationalise thinking or clarify psychology, but mostly they float above the action on gossamer wings, illuminating little about the story and even less about the main character. (For example, we’re continually told that the narrator is deeply connected to the land she lives on, but we rarely see or feel it, in the way we have no trouble believing Scarlett O’Hara draws her strength from where she grew up in Gone with the Wind.) Movies need even the most basic thematic markers to help guide you along and towards some sort of finish line. A character’s connection to ‘the land’ would certainly do – whether it’s the red earth of Tara or the golden fields of Kinraddie – but it takes more than even the most skilled of actresses telling us it’s so to make us commit to her story and invest in her journey, however ready the gorgeous backdrops may be to get us planning our next holiday in Scotland.

The Wolf of Wall Street