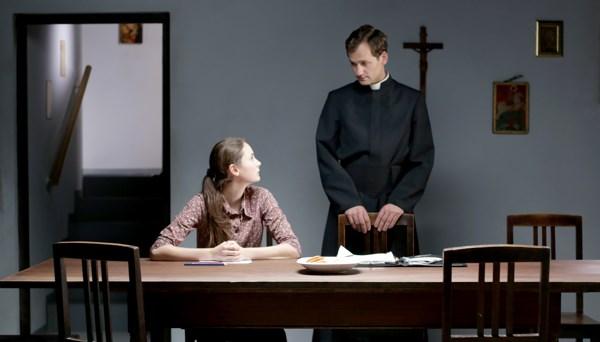 After a summer of headlines proclaiming the barbarity perpetrated in the name of religion, it might seem sadistic to go to see a film on religious extremism in the life of a small German family. However, it’s good to be reminded that extremism, and the pain it inflicts, are not the sole domain of one particular denomination, confession or community, but something to which all are vulnerable. In the case of Stations of the Cross, the violence isn’t of the macabre savagery of ISIS, but it does leave you in little doubt (should you need any confirmation) that the extreme ends of Christianity have nothing to recommend them.

Already receiving some critical acclaim, there is no doubt that the film is extremely clever. Divided into fourteen chapters to correspond with the Stations of the Cross, each chapter is composed of a single shot, leaving the characters to give the film its sense of movement and dynamism. This fixed gaze of each station fits well with the film’s attack on unwavering and unreflexive religious dogma; and it adds an extra layer of interest to each scene, as the characters move quite dramatically around the shot. However, the major problem with the film’s division into the fourteen familiar stations is that it makes the final outcome of the film far too predictable, giving the viewer the feeling that they’re watching a disaster happening in front of their eyes, in slow motion, and that they’re powerless to stop the inevitable from happening. This may of course be the intention, and certainly aligns the viewer’s perspective with that of the characters on the periphery of the plot, including school teachers and doctors.

The main target of the film’s criticism are groups like the Society of St Pius X, for some time a fringe group in dubious standing with Rome until their illegal ordination of four bishops, at which point they entered into formal schism. The family in this film belong to a community served by priests of the fictional Society of St Paul, clearly modelled on the Society of St Pius X, whose theology is intensely conservative. From the opening scene of the film, Dietrich Brüggemann is targeting the theology of these conservative priests and showing just how damaging its influence can be on teenagers. The film begins with the protagonist, Maria, attending her final class before making her first Communion. In some very well-written dialogue, Fr Weber engages the class in a question and answer session in which the children are encouraged to not only see sin within themselves, but all around them in the world. They are further encouraged to engage in spiritual warfare against the world. In some ways, this is standard Catholic moral theology, but the problem here is the ferocity with which they are taught to disregard the world, and in particular the aspects of modern society that come under the category of ‘intrinsic moral evil’. The script becomes increasingly preoccupied with the prohibition on pop music imposed by Maria’s priest and family because of its ‘Satanic rhythms’. Although this is obviously ridiculous by most sensible religious standards, Brüggemann’s obsession with it becomes almost farcical. Far more important are the very obvious signs of the pain and anguish which Maria inflicts on herself because of an overly simplistic and instrumental view of the meaning of suffering, something which sometimes seems to get sidelined.

Brüggemann shies away from an over-simplified gender stereotype within the film. The family’s faith seems to be driven by the strong-willed mother, rather than by the father who says next to nothing throughout the film. Although the mother is quite a one-dimensional character, inviting a visceral dislike from the audience, she does serve to show that conservative religious traditions are not only imposed by men, but can also be imposed, with similar violence, by women.

Despite the inevitability of the storyline, this is a good film which doesn’t fall into the all-too-prevalent tendency of attacking religious extremism with a preachy secularism, but shows very honestly the everyday violence perpetrated in the name of religion.

Beatitudes on Film: Being the ‘bigger’ person