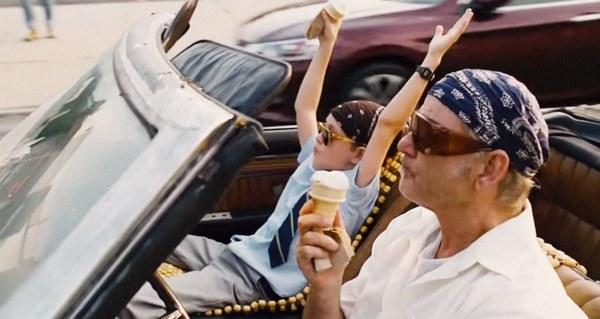 He does not like people and people do not like him, reports Daka (Naomi Watts) in a thick Russian accent, seated in a diner in Brooklyn.  ‘Why you like him?’, she asks the boy who is interviewing her for a parochial school project on local ‘saints’.  We do not hear his reply, but the answer seems obvious: because he is Bill Murray.

In this rather mawkish comedy about a new runt on the block, Murray plays the washed up, curmudgeonly title role whom we are obviously fated to adore.  Shortly after being introduced, he drives home drunk, runs over his fence and knocks himself out by while clumsily crushing ice for a nightcap.  This might be the funniest moment in the film, because when he wakes up to the sound of a mover’s truck, face pressed to the linoleum, it is pretty much sentimentalism from here on in.

The action begins with the arrival of working mother Maggie (Melissa McCarthy) and her boy, Oliver (Jaeden Lieberher), and the reluctant recruitment of their unemployed neighbour as an interim babysitter.  She is working late and through a divorce, while Vincent, with his gambling debts, could really use the twelve dollars an hour.  So, he teaches the kid to fight, how to work the odds at the horse track and how to get the bartender’s attention for another round of soda.  It all sounds like a promising setup for a heartwarming coming-of-age cum budding-second-childhood tale, and if all you are looking to do is idle away an hour and a half with the iconically cuddly comic actor, you may not be disappointed.

But I am guessing you will.  The entertainment value of unmixed Murray probably reached the zenith of its self-referential, postmodern opacity in Zombieland when he played himself -- or, rather, played himself pretending to be the zombie version of himself before a fan mistakenly blows him away. So most of us, except the diehards, will need a little something more.

St Vincent takes a few steps in the right direction.  Watts delivers a show-stealing performance as a hilariously pregnant ‘woman of the night’.  Terrence Howard has a welcome look-in as a deranged yet respectful debt-collecting bookie.  Chris O’Dowd plays Brother Geraghty, priest and teacher at the school who, while somehow seeming to make a hash of his native Irish accent, anchors what there is of the film’s religious interest.

He delivers some good one-liners, insisting to his religiously mixed class of youngsters that Catholicism is of course the best religion because it has the best clothes, referring to his clericals, and the most rules.  Additionally, it is he who insists that saints are not just people we read about from history and across the world, but many of the persons from our everyday lives who will never be acknowledged as such.  This sets in motion the class project whose results you will have guessed before even viewing the trailer.

Yet the film’s central question is a good one:  what makes for a saint?  Can someone be a hard drinker, debtor, social outcast and regular patron of feminine services, and still merit the name?  In the vision of the film, the answer is ‘yes’.  If Vincent gambles, it seems tied up with his attempt to pay the bills for his amnestic wife’s hospice care.  He dutifully does her laundry in the meantime; and if he drinks while doing so, perhaps it is to wash away some of the memories from his medal-worthy service in Vietnam.  If he lies, steals and lazes about, he also helps the scrawny kid next door to toughen up.  For all of his faults, his virtues are reckoned more weighty.

A lot like how God sees us, we pray: ‘Look not on our sins but on the faith of your Church.’  Yet, there is this difference:  whereas Vincent’s fallible humanity is excused, a saint’s never is.  A saint is not excused but forgiven, and might even be defined a person without excuse, whose faults stand open like windows to a love that is brighter, cleaner and more spacious than his own.  The mark of a saint, it might be ventured, is translucence.

Contrast this with Vincent, with whom what you see is what you get, who wears his faults on his sleeve.   Or even better, compare this with Murray, who feels like the real person on display here, wearing this thin character like a t-shirt.  This feels like a film for Bill Murray fans, who probably do not, let’s be honest, need another excuse to like Bill Murray.  Or to forgive him for taking on a role which renders him, in the end, quite likeable, quite human and quite opaque.