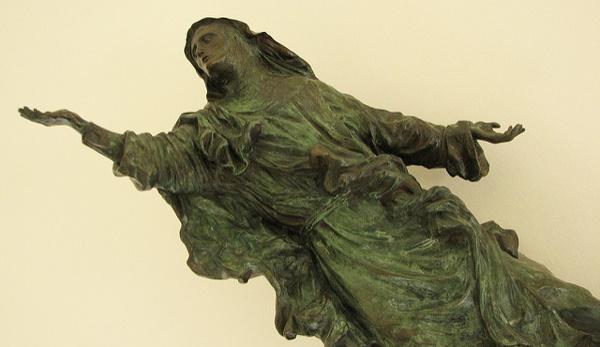 This year’s feast of a co-Patron of Europe is celebrated in the run-up to a referendum on Britain’s membership of the European Union. How does the life Catherine of Siena (29 April) suggest ways in which we might think about our political engagement, particularly when it comes to the European question? Toby Lees OP draws some lessons from a 14th century saint for our lives today.

A recent hard-hitting and provocative article in The Wall Street Journal paints a dismal prediction for Europe’s future: ‘Europe is dying because it has become morally incompetent.’ However closely one agrees with that assessment, it is difficult to dispute that Europe has an uncertain future. Despite the integration that now exists on a continent that only 61 years ago was ravaged by war, a quick survey of contemporary Europe shows a loss of confidence in the European project. In the face of this uncertainty, and as British voters prepare for a referendum on membership of the European Union, it is worth reflecting on the moral dimension of political engagement. The example set by a co-Patron of Europe is a good lens through which to do this.

Catherine of Siena (1347-1380) lived at a time of great political upheaval. To the extent that we can ever truly speak of Christendom, its heyday was the 12th century and by the time of the 14th century, cracks were starting to appear in all the old certainties. There was the threat of Muslim invaders in Eastern Europe; in Western Europe many were shocked by the spectre of the early stages of the Hundred Years’ War being waged by two Christian nations; and the Bishop of Rome was absent from his See, residing in Avignon.

Moreover, Catherine did not have to look far from her home of Siena to see political unrest across much of modern-day Italy: cities and families were each pitted against one another in fierce feuds. She saw the world around her as ‘without peace and without light’. So how might St Catherine, a Doctor of the Church, guide us as we strive to bring peace and light to today’s world?

The first quality we might note is Catherine’s desire to serve. First and foremost, she wished to serve God. Her desire was to do this by a life of constant prayer in seclusion as a member of a branch of the lay Dominicans, the Mantellata. However, God only permitted her three years of such single-minded devotion before calling her out of the cell she had created in her family home and into a life of service of the poor and afflicted of Siena. It was not her ambition to lead the life of an apostolic contemplative, but her desire to serve God, however He wished, meant that her life of service would truly be in the spirit of that beautiful Ignatian prayer for generosity: ‘to give and not to count the cost... to labour and not to ask for any reward.’

We know that Catherine often found the work of caring for the sick difficult. Yet, she prayed for strength from God and also practised self-discipline, so that the revulsion that she sometimes felt at the seeping wounds of her patients and appalling smells would not show in her countenance. She wanted them to know that they were loved and in this way reflect the love of Christ. The lengths she went to increase in self-control – on one occasion drinking the pus of a patient she was struggling to tend – seem extreme to us, but they pose a challenge and a question: ‘how much will change if we only act in the ways in which we feel comfortable?’ Catherine reminds us: ‘Nothing great is ever achieved without much enduring.’

The current political debate is largely dominated by arguments about the national interest, often by nothing more than asking whether Britain will be richer in or out of Europe. Catherine’s radical example of service can prompt voters to make political choices in general, and a decision about Britain’s membership of the EU in particular, from a perspective of service, rather than of self-interest.

Throughout her life Catherine responded to the needs of the people she saw in front of her, even when she was mistreated for it. The concern for others did not stop at her immediate horizons, but she showed that you cannot love universally without also loving particularly. Catherine tells us that ‘love does not stay idle’ and therefore it can never remain at the level of abstraction. It was her loving actions on a local level that lent moral authority to her correspondence with those who wielded broader power: integrity engenders a certain respect from others that no appointment or birthright can muster. We see this in our own day with the phenomenon that is Pope Francis. People who reject the faith that motivates him are nonetheless inspired by him.

Both Catherine and Francis, in this respect, illustrate by negation a familiar complaint about political leadership. To lead implies taking people with you, but too often we hear that those who wield political power do so in a coercive fashion, they fail to inspire. This is felt at the national level - we see it in the disillusionment with traditional politics across the board - and even more acutely at a transnational level, where leadership is exercised more remotely and therefore the task of inspiring individuals is more difficult.  This distance no doubt contributes to the loss of control that many people feel in relation to the decisions which affect their lives and creates resentment of ‘those in Brussels’ even when they have little idea of what ‘those in Brussels’ are supposed to have done.

In contrast, Catherine knew the important political figures of her time and had a means of communicating with them. She was a prolific letter writer to all sorts of figures and varied her style with great sophistication according to the recipient and his or her particular strengths and weaknesses. As such she could be gentle, or with no qualms tell the pope ‘to be a man!’ But it was not only ease of communication that allowed her to have such influence. She attracted a great number of followers – who followed her in a more profound way than is required by being a follower on Twitter! – and correspondents because of her commitment to service. It was her willingness to get involved at the most basic level which gave her the platform to transcend the expectations of a 14th century woman, particularly one who did not come from a noble family.

Across Europe there appears to an enormous desire for change, but the change that is demanded is normally of other people, or of institutions. With Catherine, however, the impetus for change always started with herself:  ‘I do not see how we can rule anybody unless we start by ruling ourselves.’ I think she would caution against too much focus on institutions and regulations, as if perfect institutions would provide us with perfect people and perfect justice. Her desire to fulfil God’s plan for her was what led her to a position in which she could change the world for others: from her ministry to the poor of Siena, to the profound effect she had on the political situation of the time, not least in using her influence to persuade Pope Gregory XI to return to Rome from Avignon. She was by any standards one of the most important figures of the 14th century and her example shows us what is possible when we allow God to work through us.

What do I think this Doctor of the Church would prescribe for those of us considering the European question – and indeed for anyone reflecting on public life? I think her answer would be one which she exemplified in her own life: ‘Be who God meant you to be and you will set the world on fire!’

Toby Lees OP is a student brother with the Dominicans in Oxford where he is currently completing his theological studies. Prior to joining the Order, he was educated by the Jesuits at Stonyhurst and worked as a solicitor in London for seven years.

‘We are the people’