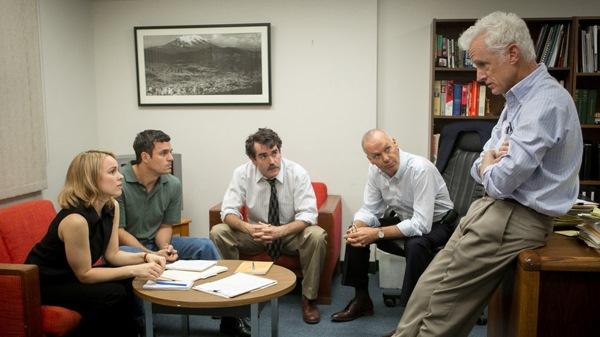 Spotlight is a film about pervasive, everyday evil. More precisely, it tells of how a particular instance of evil came to be identified and resisted. The evil is, of course, the clerical Child Sexual Abuse scandal, which came to light in the Archdiocese of Boston in 2002; shocking, in terms of the scale of the abuse (nearly 300 perpetrator priests, with as many as 1,000 victims), and for its systematic cover-up by the Church authorities, who routinely transferred offending priests from one pastoral assignment to another. The magnitude and severity of the Boston case have given it a huge status. At the same time, its investigation and exposure by Boston Globe journalists – ‘Spotlight’ is the name of the newspaper’s four-person, in-depth investigation team – make for a compelling, powerfully well-made movie.

The Christian philosopher Paul Ricoeur wrote that when it comes to describing evil (as opposed to human finitude or limitation), even the most advanced or sophisticated culture finds that it has to resort to the language of ‘myth’ – not in the sense of a story which is a pack of lies, but a narrative whose deep structure allows what is otherwise inexpressible to be brought to a shared awareness. The ‘Hollywood’ template offers familiar examples of mythical patterning, above all in the exposure of conspiracies and the confrontation of entrenched institutional power. All The President’s Men (1976) tells of the uncovering of the Watergate scandal by Washington journalists, but there are other renditions of persistent, committed investigators, telling the truth to brutal power (Silkwood; Erin Brokovich, and so on). It is as if we can only bear to examine human evil through the counteractive lens of heroic individuals or groups – Schindler, Elliot Ness, Batman – whose thirst for justice offers a kind of compensatory hope.

Spotlight delivers on this pattern, with a clutch of splendid performances from the intrepid team of investigators. Michael Keaton (a former incarnation of Batman, of course) fits the bill as Walter ‘Robby’ Robinson, the leader of the Spotlight team, with strong, Oscar-nominated performances in the roles of Michael Rezendes (played by Mark Ruffalo) and Sacha Pfeiffer (Rachel McAdams). Stanley Tucci plays a prickly, eccentric, but sympathetic lawyer, Mitchell Garabedian. Between them the cast deliver the range of ‘normal’ human reactions of anguish and anger which we need to see, given the destructive enormity of what they are uncovering. As it happens the team are all lapsed or former Catholics: Rezendes’ wrenching lament for the lost hope that he might nevertheless have returned to his faith one day is an especially heartrending moment.

We see the same searing rawness, above all, in the interviews with the victims; three, in all, testify unforgettably to what had happened to them. Even the one perpetrator priest who appears in the film reveals himself to have been a victim of rape – at the same time as he displays a chilling emotional disconnect from the unspeakable damage he has, in his turn, inflicted on children. It is highly unfortunate that it is not easy to tell, from the internet cast lists, the names of the actors who play these short but very important cameos.

The struggle of the victims to get their voices heard is not the least important narrative strand in Spotlight – the leader of the survivors’ group (played by Neal Huff) is initially dismissed by everyone as an unbalanced crank, while the work of interviewing survivors is temporarily derailed when the atrocity of 11 September 2001 takes news priority. The film subtly touches a lot of bases.

Spotlight’s maturity is revealed by Robby’s crucial strategic decision to hold back from exposure of the one individual largely responsible for the cover-up, namely Cardinal Law, and to seek instead to ‘go after the system’. Once it becomes clear that this is not about the misdeeds of one primate, nor of a number of ‘bad apples’, but of an all-pervasive culture of deference which corroded the consciences of policemen, lawyers, civic dignitaries, philanthropists and education administrators – all ‘doing their job’ – then the question of collective responsibility, of ‘good Germans’ looking the other way, has to be addressed. As Garabedian tartly remarks, ‘if it takes a village to raise a child, it also takes a village to abuse him’.

The city of Boston’s strongly-knit but introverted and defensive Catholic culture thus stands indicted. Only outsiders like Garabedian (who is Armenian) and the newly appointed Jewish editor of the Globe (Marty Baron is a nervous but increasingly assertive parvenu, marvelously rendered by Liev Schreiber) stand any chance of making a difference. Robby himself, very much a ‘villager’, admits to his own complicity. The truth will indeed set us free; but as Hannah Arendt has observed, the truth often comes at the wrong psychological moment.

There is some attempt at a wider analysis of the clerical sex abuse ‘phenomenon’, in the voice of Richard Sipe, a noted commentator with considerable clinical experience who collaborates with the Spotlight team. I imagine some of the main objections to the movie will concern this deployment of a controversial author giving an inevitably breathless and questionable overview of the dysfunctionality of ‘the system’ (it is all to do with celibacy, clerical secrecy, etc.). Curiously, even this episode has a healthy ring to it. The filmmakers have openly named their research ‘source’, and anyone who wishes to take issue with Sipe’s analysis is free to do so. I felt here, as elsewhere in the film, there was a desire to replicate the scrupulous honesty of the investigative journalism it portrays. This is a film seeking to be as open as possible, to win our trust.

It is, of course, a challenging and uncomfortable movie for Catholics (lawyers, at least collectively, don’t come out too well either). It would need someone who knows the Boston Catholic world better than I do to assess the fairness and accuracy of the ecclesial claustrophobia which Spotlight depicts. And for all that the film seeks to avoid the path of scapegoating Cardinal Law, he is clearly identified as the summit and source of the corruption. The film’s closing caption reminds us that after Law’s resignation he was moved to a prestigious post in Rome – an instance, at a higher level, of precisely the ‘transfer’ of problematic clergy which is at the core of the Boston scandal (over to you, Pope Francis …).

Seeing this film has convinced me once again of the importance of regarding the Church, whatever else she may be, as a ‘school’ for discipleship, for the ‘discipline’ of holiness. And the theologian Nicholas Lash has reminded us that learning and governance are not the same thing.[i] In which case, the truly authentic, Catholic response to this film has to be: what can we – must we – learn from it?

I propose two ‘learning outcomes’. Firstly, there are no new facts on display, no further data about the Boston scandal. But perhaps the facts need to be seared into our soul, in the way that only great, or at least good art, can do (drama and film, especially). And Spotlight is good drama. There’s a clearly cathartic effect – things are said, albeit from the mouths of actors, which should never have been left unsaid or ignored. For many people, the film will have a disturbing, but also healing effect, which the Church must be prepared to acknowledge and appreciate – even and especially when the Church is not itself the agent of that healing. I should add that while in one sense all this may be ‘old news’ for Catholics in the USA and Europe (sad to say,  ‘safeguarding fatigue’ is sometimes evident among clergy and religious), it is still distressingly fresh in many geographical regions of the Church, where the ‘phenomenon’ has scarcely been acknowledged as a reality, let alone addressed. This is not, in the end, about the Boston ‘village’, as Spotlight’s startling end-caption demonstrates by listing the dozens, hundreds, of places worldwide, where clerical abuse has occurred.

The second lesson concerns, quite simply, ‘signs of the times’ which the Church has too often managed to misread. The God of justice, defender of the widow, orphan and stranger, can and does speak from outside the Church. The secular media (if we can so describe the anguished post-Catholicism of the ‘Spotlight’ journalists) have been crucial in bringing the Church to account on the child abuse crisis, in the US and elsewhere. José Casanova, the Catholic sociologist of religion, has made a similar case for Western secular feminism, insofar as an enhanced view of the sacred dignity of women has, as its corollary, a new awareness of the vulnerability of children and the need to protect them. Too often the Church’s default position towards secular media, towards secular feminism, has been defensive and oppositional. Spotlight offers the possibility that the voice of God might, after all, be discernible in these unlikely sources.

To this extent, the positive appraisal of the film by Cardinal Sean O’Malley, the current Archbishop of Boston, has to be welcomed, along with Luca Pellegrini, on the Vatican Radio website, declaring that the Globe reporters ‘made themselves examples of their most pure vocation, that of finding the facts, verifying sources, and making themselves – for the good of the community and of a city – paladins of the need for justice.’

This is a sad, challenging, non-euphemistic, responsible, good film. Watch, and learn.

The Spirit and the Letter