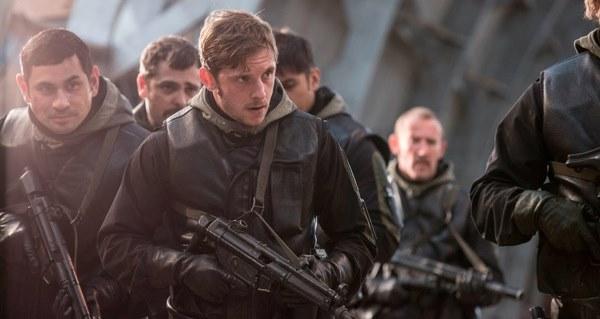 New Zealand director Toa Fraser’s film 6 Days depicts the extraordinary events that took place on 30 April 1980 at the Iranian Embassy in London and were televised live into every UK living room and around the world. Six Iranians stormed their country’s embassy and seized 26 hostages, demanding that the Iranian government release 91 political prisoners. The British government, under the watchful eye of a captivated media, decided that the SAS would end the siege with force if any hostage was killed. As the days unfolded, a hostage was killed and the order was given to strike. This episode defined then Prime Minister Margaret Thatcher as a leader who did not do business with terrorists, and it enhanced the reputation of the Special Air Service (SAS) as a formidable force who certainly did do business with terrorists.

Glenn Standring’s laboured screenplay may not allow the characters to develop enough for the audience to empathise with them, but the excellent editing and score bring pace and tension, even though the outcome is known. Yet, although it is entertaining, fast-paced and depicts a volatile situation, the impact of the film is less than the sum of its promising parts.

Comparisons will inevitably be made with other hostage thrillers such as Munich or Argo, and 6 Days will come off the worse for that. The historical narrative is missing because the event itself was over in a relatively short period of time. The film focuses on daily proceedings rather than context and meaning.  Those of us who remember the event will recall what this did for Thatcher’s prestige on the global stage, and for the cultural perception of the SAS. They sought no accolades or praise for doing what they would have seen as their job, nonetheless they were offered up as the solution to any crisis in which the UK would be involved for the next twenty years in the pages of News International publications.

The film focuses on three main characters at the centre of the crisis. Chief Inspector Max Vernon (Mark Strong) was the Metropolitan Police hostage negotiator. Strong is an accomplished and gifted actor, but his talent is stifled by the confines of the script: Standring never really gets beyond the, ‘I wouldn’t do anything too hasty’ approach to hostage negotiation. His character has far too many moody introspective scenes and an over-reliance on his deep voice. Strong’s ability to provide tension is underused, which is a missed opportunity.

Lance Corporal Rusty Firman (Jamie Bell) leads the SAS, who glide as a group across the screen with efficiency and prowess. Bell gives a convincing performance, script aside, as an effective and highly trained SAS operative. He and his team demonstrate throughout the film their attention to detail, rigorous planning and assiduous practice. It’s impressive. They will do the job with no fuss and no questions asked. But Firman and his fellow soldiers are not fully explored as characters. As far as the film is concerned, they are dark and deadly operatives. This is a pity, as the planning and execution of such a complex operation in such a short space of time surely warrants a lot of questions about and attention on those who devised and carried it out.

An additional component of this story is its coverage by the world’s media. As it unfolded, the BBC kept interrupting programmes to go live to Princes Gate for updates from a relatively new journalist, Kate Adie. She made her name covering the crisis and went on to become one of the most respected journalists at the BBC, so it is a shame that Australian actress, Abbie Cornish does not get to grips with the character in general or the north-east accent in particular. Elsewhere, too, the media are made to look churlish and disengaged, when at the time they were obsessed with every movement outside the embassy. In 1980, the UK had only three TV channels, so everyone was watching to see what was happening, and generally the coverage was good. The media did not flinch when, for the first time on English soil, the SAS blew up the front of the embassy as a distraction to storm the back to free the hostages.

Often in hostage films, the political decision-makers are left to carry heavily-laden one-liners and Six Days is no different. The late Tim Pigott-Smith as Home Secretary Willie Whitelaw provides the stiff upper lip and conveys government resolve through pithy statements. But the film wastes the opportunity to explore the other side of the story. We see how anxious the hostage-takers, Salim (Ben Turner) and Faisal (Aymen Hamdouchi), were to have their unrealistic demand met, but aside from that neither their characters nor their cause are examined. We are left knowing how they behaved in those few days, but not why.

6 Days is being released on Netflix amid mixed reviews. It is a sufficiently engaging watch, but it is most significant in the current climate as a window into a time when we had more confidence in ourselves and our institutions. Today the fear and confusion over the politics of Iran and the Middle East breed anxiety, and faith in our domestic politics and politicians is in rapid decline. Perhaps the true impact of this story is as a reminder that public approval can be won with swift and decisive action in the face of adversity, or as the SAS motto has it, ‘Who Dares Wins’.