Skip to main content
Photo by Steve Day at flickr.com 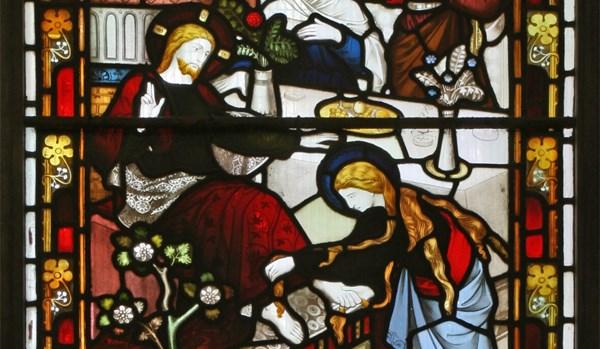 The gospel reading for the Monday of Holy Week is John 12: 1-11, which tells of Jesus’s visit to the home of Mary and Martha, and their brother Lazarus, whom Jesus had raised from the dead. Rob Marsh SJ invites us to enter into the scene by considering the events from Mary’s point of view and imagining how joy, confusion and fear all gave way to devotion.

I think he came back to us … out of embarrassment or a nagging need. Back to Bethany and Martha and Lazarus and me – looking to explain or be forgiven or something – at least at first. After opening the tomb and giving back our brother and then running off like that leaving us no room for thanks, no room for gratitude, no time to ask him what he’d done or what it might cost.

No, just the turmoil and the disbelief and the laughing and the crying. And Martha dancing for joy, and me singing inside, and Lazarus – Lazarus dazed, surrounded by friends afraid to touch and then unable to stop touching, checking their unbelieving eyes. Even one or two less friendly eyes – troubled, angry. I can remember it all and remember nothing – like a dream. I didn’t even see Jesus go, him and his companions. Too wrapped up in all the jubilation I was.

But what do you do when it’s over? When the crowd’s gone, picked you clean, and the three of you are, inexplicably, there. Sitting. Wondering. All the aching questions unasked … or asked and unanswered.

It seems we weren’t the only ones wondering what it all meant since the passing days saw a price slapped on Jesus’s head. And lies spread. And threats too. Wouldn’t you think they all would be happy for us? Wouldn’t you expect that and not the whispers that a living Lazarus was an embarrassment – and better off dead. And through it all no sign of Jesus – not to explain, nor promise, nor make it all make sense.

Then suddenly there he was. At the gate. Our gate. To explain. To promise. To make it make sense. So I hoped.

And he said little else. Him the great talker, silent, brooding. John told us he’d been like this since the tomb. Moody. Unnaturally quiet. Hiding in the back of beyond, staring out into the desert. As if waiting for something. Turning aside their concern with a distracted shrug. Till the twelve of them thought it was all over. And argued among themselves about what they would do. Go back north? Or walk into likely death at his side?

Then he ups and tells them he must see his friends and here we all are. Around the table. Eating, drinking, trying to ignore his mood. The guys working hard at enjoying Martha’s feast – laughing, fooling – but, I could see, glancing over at him all the time. Him alone in all the hubbub. They all kept their distance. Confused. Afraid to touch. Embarrassed.

I watched him. I’ve been able to read him since first we met. And right now, fear in his eyes. A need not to be alone. To have someone promise to stay by him. Just like Lazarus’s look when death was crawling close. But mixed in him with the horror of choice – stay or go up to him and no other. I could see him searching for his way out. Finding none. And searching again.

It was just then I heard the voice in my heart say: ‘It’s time.’ It was time. He might not know it yet … but I did. I stood and fetched the oil of nard my inner voice had had me save all these years for him. I prayed. I wrapped a towel around my waist. Unbound my hair. And, as the room hushed, knelt before him. Held his eyes, steady like. Touched his aching feet. ‘Do you know what I’m going to do for you?’ Slowly he nodded.

I took the flask of oil, gave God thanks and praise, broke the seal, and poured the perfume to anoint him for his destiny. And as his tears began to flow I made my promise. ‘Whatever happens this week, my love, you will not be alone.’

This text was first preached as a homily to the Jesuit Community of the Jesuit School of Theology at Berkeley, Santa Clara University, in April 2000.