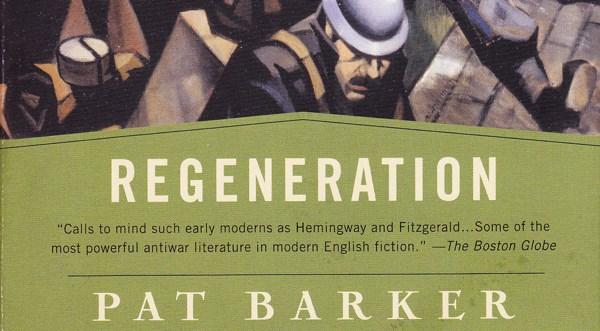 Our series on First World War literature continues as Niall Leahy SJ explains why you really must read a celebrated piece of historical fiction. Pat Barker’s 1991 novel Regeneration shows us that our efforts to connect with the events of one hundred years ago require the input not just of the historian, but also the novelist, the therapist and the poet.

If one had to construct a psychological profile of the First World War, Multiple Personality Disorder would probably be a popular diagnosis. The War has been referred to as both the ‘the war to end all wars’ and ‘the war that never ended’. You could march an army through the gap between those two interpretations.

Our collective memory has never fully managed to get a hold on the horrific events that came to pass between 1914 and 1918. Complexity is often cited as the reason that we fail in our attempts. Be as that may, the perpetual squabbling of scholars does tell us something about what historians ultimately value. A preoccupation with obtaining a bird’s-eye view of human action can lead to an inflated regard for the stratagems of political leaders and a devaluing of the lived experience of those who had to deal with the fallout. Stories and memories can be downgraded to become vignettes that serve primarily to colour in the bigger picture. Regeneration is a novel that encourages us to persevere in our efforts to connect with all that happened but to do so by noticing every aspect of the picture’s composition. Pat Barker champions the roles of the historical novelist, the therapist and the poet alike, all of whom help us to apprehend the breadth, length and depth of the War experience.

Barker puts her imagination to work on a remarkable wartime episode – the concurrent stays of celebrated war poets Siegfried Sassoon and Wilfred Owen at the Craiglockhart War Hospital, a psychiatric facility for military personnel in Edinburgh. Sassoon is a decorated soldier who has taken a public stand against the continuation of the War. In an effort to mitigate any rise in public support for him, the establishment pronounces that Sassoon is no longer of sound mind. Dr William Rivers is enlisted to help him process the trauma resulting from his time in the trenches and, if possible, to coax him back into them. Both doctor and patient grow through the process of asking what it really means to be true to oneself and what it means to serve.

The patients at Craiglockhart have no shortage of time and are very deliberate in how they pass it. If you have ever gone on a silent retreat or had a few fallow days for some reason or other, then you will know that activities that you previously considered to be incidental, like taking a stroll, having a cup of tea or popping into a chapel, can take on a new significance as occasions of reflection and soul-searching. No longer peripheral to the important and ‘productive’ tasks like work or study, they take centre stage. Barker treasures these very things that make up each day at Craiglockhart because in them she sees a greater significance. For the novelist, each small step along the path of healing and growth has the same significance as the momentous ones in which they culminate, and all are worth writing about. She is not in a rush to tell the story because she believes that our reconciliation with the past needs to be slow, free from the pressures of time.  The crucial moments, the epiphanies and the turning points are better understood and appreciated by the reader who has patiently accompanied the characters along the way.

The therapist also takes a central role in the process of reconciliation with the past. Regeneration is set in a time when the field of psychiatry was taking significant steps forward. Barker displays this progress all the more clearly by presenting psychiatric procedures alongside the coercive and brutal practices which focused on ‘treating’ the physical symptoms of trauma but ignored the emotions and memories of which they were an expression.  Through the eyes of the compassionate Rivers, the reader begins to see that those who go mad amidst the madness of war have not compromised their humanity but have gone mad precisely because of it.  After reading this novel it strikes me that the enormous quantity of data we encounter when we attempt to recall the past is not necessarily the main obstacle to such a task; we are equally overwhelmed by the emotional depth charges that the process of remembering can detonate in us. However, when we sense that the present is a place safe enough to contain the danger of the past, then our memories return to us. The presence of a good listener or therapist may provide such reassurance of safety.

For all its virtues, counselling is a pursuit for the individual and there is nobody on earth who could listen to the woes of us all. For communal remembering we must look elsewhere. Regeneration points us in the direction of the poet. Barker depicts the intimate mentor-student relationship that sprung up unexpectedly between Sassoon and Owen; they bring out the poet in one another. The poet is one who allows his gaze to linger on the past as his creative spirit hovers over the thoughts and feelings cradled by memory. Without flinching, he can hold the existential and spiritual depths of the past before us. This sustained attentiveness to reality is at the heart of his craft. The following passage, in which the character of Owen describes the war that transcends the trenches, gives us an insight into the poet’s vocation:

Sometimes when you're alone in the trenches, I mean, at night you get the sense of something ancient. As if the trenches had always been there….It's as if all other wars had somehow…distilled themselves into this war, and that makes it something you almost can't challenge.

Regeneration has helped me to understand that we will never grasp what World War I was all about unless we allow ourselves to weave the fabric of the past with an array of threads. The historian surveys the landscape for prominent features, the novelist imagines how that might have been lived and experienced, and the therapist journeys inwards in search of the traces that remain. Meanwhile, the poet breathes all of this in. He stands in one place and stays there until his word touches the eternal.