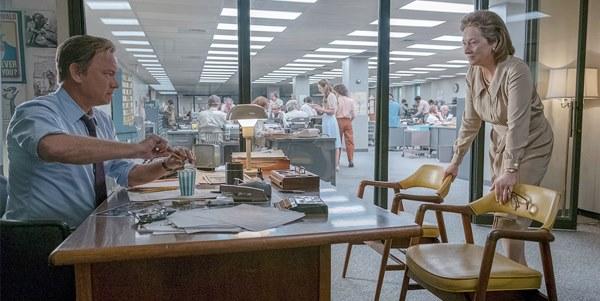 Steven Spielberg is at it again, making solid movies that promote what Americans would consider to be their traditional values: truth and justice, democracy, equal rights. The plot for this one is uncomplicated: a government-hired observer to the Vietnam War steals a classified report that demonstrates American involvement in Vietnam long before the American public were aware and, more devastatingly, knowledge at the highest levels of the futility of the war even as American presence in Vietnam increased. Five years later, as the war continues, the observer sends this report to The New York Times, who promptly receive an injunction forbidding them to publish any further stories relating to the report. Cue the Washington Post, who have been playing catch-up, trying to get their hands on this top-secret report so that they can have a share in the headlines. Now, with documents in hand and The Times gagged, the Post is the only horse in the race. But wait. Read the wording of the injunction more closely. If the Post go to press with the same documents, they will face charges of collusion, or worse, espionage and treason; the owner and the editor will end their lives in jail, and the rest of the staff will be out of work. With so much at stake on either side, what should they do?

Closely allied to this historic battle for the freedom of the press is the personal story of Katharine ‘Kay’ Graham, the second generation and third member of her family to own and run the Post. But Graham was brought up to be a socialite not a newspaper magnate. Her training is in wearing fashionable dresses and hosting good parties, not in balancing budgets and attracting investors. However, after her husband’s suicide, she finds herself having to straddle both sides of a social divide even as the men around her patronise, talk over and ignore her.

Spielberg’s take on the woman getting ahead in a man’s world is refreshingly real and relatable, though it jars on modern, feminist sensibilities. Graham proves herself to be intelligent and capable, an astute businesswoman who knows her paper and her readership, but she has no understanding of or appreciation for her own abilities. And her great triumph at the end of the film is in recognising the need to surround herself with advisors – yes, male advisors – who respect her position as head of the company. A tighter focus on Graham herself might have made for an interesting study on the decisive effect that environment has on an individual’s potential to thrive, especially if some editor could cut the one line that spells it out for us, and also the image of her leaving the Supreme Court and passing before an adoring female crowd.

The main problem with this film, though, and its fatal flaw perhaps, is that it cannot make up its mind whether it is about freedom of the press or equal rights for women. In trying to address both, it spreads itself too thin. The lead up to the dilemma over whether or not to risk publication takes far too long without being entertaining enough in the interim, and Graham is not a robust enough character to be an engaging protagonist. Even though we are given some insight into her life and upbringing, and even though she is played brilliantly by Meryl Streep, there is not enough complexity to her character for the audience to overlook her personal weakness. The result is a film that lacks drive and ends up feeling rather flat.

When President Nixon uses the American judicial system to silence The New York Times, the film focuses mostly on the business opportunity to the Washington Post. The question of the First Amendment (which safeguards freedoms of religion, speech, the press and assembly) appears to come as an afterthought; the issue of a basic democratic right takes a backseat to the primacy of will. The film never forces us to consider whether the newspapers might have been negligent in the publication of secret state documents. But such a question would be difficult to ask of audiences in America (and beyond) today, who take the public’s right to know for granted and who understand personal rights not through the lens of human dignity and the common good but rather as based on public opinion and personal whim.

I believe that this lack of real thought regarding the rights of the newspapers does not proceed from laziness or a fear of asking difficult or unpopular questions, but from a deeper and more troubling source: the triumph of moral relativism in mainstream American culture. The film cannot ask difficult, searching questions about rights and responsibilities because these kinds of questions are alien to a society in which the right to do what I want defines morality, where there are no absolutes, only individuals and their respective, conflicting, wills. And in that sense, however unintentionally, Spielberg may after all have touched on America’s most cherished value and its deepest flaw.