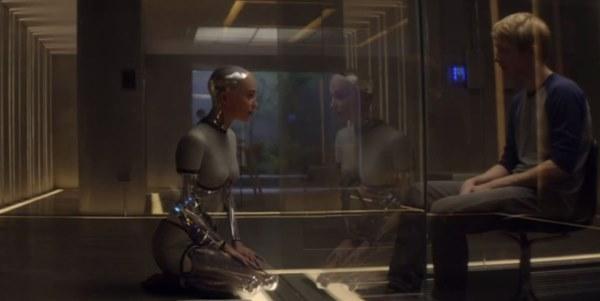 The Turing test is one of the fundamental ideas in the philosophy of AI (artificial intelligence), and usually involves a computer hidden away from a person who is dialoguing with it. The test is passed when the person cannot tell whether he or she is talking to another human or to a machine. Ex Machina raises the stakes: at the outset it reveals the subject, Ava, to be a young woman (Alicia Vikander) with a transparent, component-packed, gently glowing skull and torso, and then sets the same test.

The perplexity is intentional, and when Caleb (Domhnall Gleeson), a twenty-something contest-winning computer programmer, is summoned out to the high-tech research bunker of his zillionaire boss, Nathan (Oscar Isaac), it is not instantly obvious that anything remains to test. Caleb launches into an enthusiastic conjecture about programming, algorithms and protocols, only to be cut short by Nathan’s almost offensive casualness. He doesn’t want to talk about how Ava works, he insists, but about how she makes Caleb feel.

This seems like an odd question, until we realise Nathan’s real motivation: his version of the Turing test is not whether his machine can convince Caleb that it is as intelligent as a person, but whether, being so obviously mechanical, it is yet personal enough to convince him that it loves. The drama that follows is a cutting edge exploration of the significance of love, sex and manipulation in human relationships, which is robustly intelligent and never artificial, except in the archaic sense of something artfully or skillfully made.

Caleb asks a pertinent question early on. Why make Ava attractive? Is it like the ploy of a stage magician who hires a beautiful assistant to misdirect from clunky, moving parts? He could have built her mind into a grey box. Nathan responds that he could have done, yes, but what motivation does a grey box have to interact with anyone? So he made her, he relates, anatomically correct, and with the capacity to register pleasure in the usual ways.

This is where the manipulation sets in. Are Ava’s progressively intimate interactions with Caleb merely calculated means to other ends? Can Caleb’s growing feelings for her be identified with love, or can they simply be reduced to a mixture of loneliness, sexual desire and intellectual fascination? In the end, is there any difference? These unspoken concerns charge the air as Caleb approaches the end of his visit and must decide how to respond to Ava’s desperate plea for escape.

What is at one level a beautifully shot and well-paced paranoia flick (it is the directorial debut of Alex Garland, writer of 28 Days Later and Sunshine, and adapter for the screen of Never Let Me Go), is also a stimulating piece of philosophy. Going back to Caleb’s grey box question, Nathan asks in response whether consciousness can exist apart from interaction -- in a time of assumed individualism, this refreshingly suggests a conception of a human being that is inescapably interpersonal. In a brilliantly brief essay from his pre-papal career, Joseph Ratzinger traces a similar idea back to the doctrine of the Trinity, wherein, as he writes, ‘even God exists only as a “we”’.

When Nathan gives a preliminary indication that he might have constructed an AI, he frames the disclosure in terms of the greatest scientific discovery in the history of man; Caleb responds, if he has truly done it, it is no longer the history of man they are talking about, but of gods. This is an intriguing remark in light of the film’s title – from which the ‘Deus’ is conspicuously absent – but also in connection with its central preoccupation with the meaning of love. We commonly speak of inspiring love in others, a phrase which carries a heredity of the spiritual and connotes indirection, but if the effects of this can be seared into a hard drive by engineers and replicated through nuanced variables of behaviour and response, is it still really love we are talking about?

In raising this quandary, the film pushes straight past geeky speculation about the difference between men and machines, and touches a nerve at the pulsing center of human life, which is the binary between love and control. Caleb is right when he says that only a god can make AI, because the only creature that could pass Nathan’s reconceived Turing test is one that has been set free from the control of its maker. Anyone who has felt the spiritual constriction of a manipulative simulacrum of love will also know, by negation at least, that sweet release into personality that comes with the freedom that is love.

It is love that transfigures the repetitive drudgery of automatic existence into the adventurous experience of personal life. ‘I have come that they may have life’, says our maker in John’s Gospel, ‘and that they might have it to the full’. For the pre-industrial ears that originally heard them, these words would not have made much sense reinterpreted in the techno-savvy language of robotics and advanced mathematics. But from where we come today, they might be rendered as fresh and as forceful as the first day of their utterance when understood in terms of that control-renouncing power which alone can raise up personal life ex machina.