Skip to main content
Photo by DonkeyHotey at flickr.com 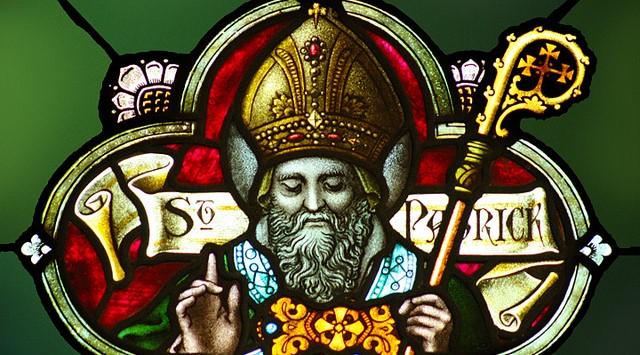 Parades, green clothing and Irish flags: even if you are not actively taking part in them, you will certainly come across celebrations of St Patrick’s Day on 17 March.  What do we know about the man who is best known as the Patron Saint of Ireland, and where can we find the Christian message in the midst of the shamrocks and pints of Guinness?

On 17 March, people across the world will discover their long-forgotten Irish ancestry, or blithely ignore their lack of any relation to the Emerald Isle, and join together in celebration of St Patrick’s Day. Its worldwide popularity speaks not only of the human fondness for an excuse for a party, but also of the extraordinary diaspora of Irish people around the world. St Patrick is patron of famous destinations of Irish migrants like New York, Newark and Boston, and also of places as unlikely as Nigeria, Melbourne and Rolla, Missouri. But what is behind all of these parties?

Like so many Christian feasts, St Patrick’s Day has been somewhat hijacked. In a similar way to Christmas and Easter, a secular celebration has taken over a time of real joy for Christians – it is so often said that it is hardly worth repeating, but the accoutrements of Christmas go on sale towards the end of summer, to be replaced by Easter eggs on 1 January. Another example is the feast day of St Valentine. Although still celebrated in the Extraordinary Form, this saint has disappeared from our ordinary liturgical celebrations, partly because very little is known about him. This, however, has not stopped the explosion of the commercial celebration of St Valentine’s Day.

The situation is very similar for St Patrick. We really have no idea who he was, but from some of the writing attributed to him[1] we can say that he was a Romano-British peasant, although we cannot say with any certainty where he was born. Nor can we be sure when exactly he lived, but it seems most likely that he was active as a missionary in Ireland in the second half of the fifth century. As a child of sixteen he was kidnapped and taken slave in Ireland, before which time he was not, according to his Confessio, a practising Christian. In Ireland, the kidnapped Patrick was put to work as a shepherd, and he spent much time in prayer and fasting as he came to know God more. He tells us that after six years he began to receive visions, and one of the first was that a ship was waiting to take him home to his family. He escaped from his captivity and ran many miles to the coast to get to the ship and eventually, through many a twist and tale, to his family.

In another, later vision, Patrick received the clearest sense of his vocation as a missionary priest and bishop. He tells us that he:

…saw a man coming, as it were from Ireland. His name was Victoricus, and he carried many letters, and he gave me one of them. I read the heading: ‘The Voice of the Irish’. As I began the letter, I imagined in that moment that I heard the voice of those very people who were near the wood of Foclut, which is beside the western sea – and they cried out, as with one voice: ‘We appeal to you, holy servant boy, to come and walk among us’.[2]

This Victoricus could be the saintly bishop of Rouen, St Victricius, which would fit with the fact that Patrick studied in France for the priesthood. After ordination he acted on the vision and left for Ireland, where he spent many years in missionary endeavours. Although we cannot be certain where exactly he worked, it seems that it was mainly in modern day Northern Ireland and on the West Coast of Ireland, eventually being ordained Bishop of Armagh.

But what does this saint, so strong in missionary zeal and about whom we know very little, have to do with our modern day celebrations? In many ways, very little – St Patrick has about as much to do with a pint of Guinness as St Valentine has to do with a box of chocolates and a romantic meal for two.

The answer comes from the Confessio itself. In the very opening paragraphs of the autobiography, St Patrick offers a meditation on the gift of faith and the praise that we owe in return to God for such a gift. Perhaps this is St Patrick’s greatest relevance, particularly in a culture that seems increasingly hostile to declarations of faith. He refuses to stay quiet; his evangelising zeal comes from knowing that he must speak to others of Christ:

That is why I cannot be silent – nor would it be good to do so – about such great blessings and such a gift that the Lord so kindly bestowed in the land of my captivity. This is how we can repay such blessings, when our lives change and we come to know God, to praise and bear witness to his great wonders before every nation under heaven.[3]

Throughout the Confessio St Patrick speaks intimately about his feelings of unworthiness and sinfulness, but he also recounts the story of his conversion and his change of life as an act of thanksgiving to God. Despite the fact that we do not know all that much about him, and very little with certainty, he still teaches us that the Christian life is one of continual conversion, and that conversion requires a change of heart and a renewal of action in our lives. It seems oddly appropriate that St Patrick’s feast falls in the middle of Lent, a time when we are reminded of our need for conversion and repentance.

Of course, this is not to say that we should not celebrate St Patrick’s Day at all. Synthetic and de-Christianised it may be, but Christians can and should celebrate the feast of one of the great saints of Britain. The only way that we can hope to maintain Christian traditions within a secular culture is to stick to them; to keep the penitential seasons of Lent and Easter faithfully and celebrate Christmas and Easter well. These seasons and feasts offer us a chance to reclaim something of the Christian tradition surrounding them.

Alex Robertson is Producer of Pray as you go.

[1] St Patrick is reckoned to be the author of two texts: one is a short autobiography called the Confessio; the other is the Letter to the soldiers of Coroticus.

Celtic Spirituality: Just what does it mean?

The social reality of Christmas