Skip to main content
Photo by Elena at flickr.com 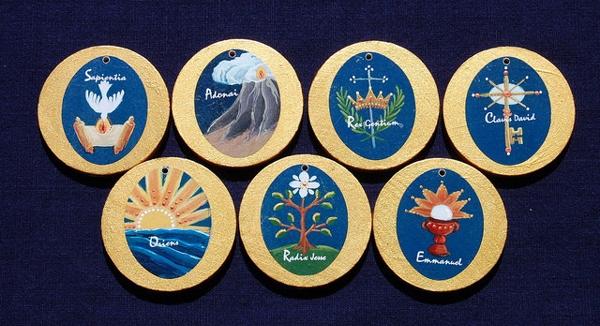 The O Antiphons shape the Church’s liturgy in the days leading up to Christmas. Liturgist Andrew Cameron-Mowat SJ explains how the antiphons function during Evening Prayer and as Gospel Acclamations, and introduces the ancient texts that Thinking Faith will explore over the coming weeks.

The O Antiphons, as they are commonly called, are the chants of ancient origin sung or recited at the beginning and end of the Magnificat during the service of Evening Prayer on each of the days leading up to Christmas Day, from 17-23 December. (There is no need for an O Antiphon on Christmas Eve as Evening Prayer for that date is the ‘Evening Prayer I of Christmastide’.)

With the reform of the Lectionary and Divine Office after the Second Vatican Council, it was decided to introduce the O Antiphons into the Liturgy of the Word as the Gospel Acclamation during Mass, choosing an antiphon that was related to some aspect of the scripture assigned to the Mass for that day. On some of the days there is a choice of O Antiphon, which is left to the discretion of the cantor.

This decision meant that there is a difference between the order of the antiphons used in Evening Prayer – whose first letters in reverse spell ero cras, ‘tomorrow I will be’ – and the order used for the Gospel Acclamations, whose selection is determined by the scripture for the day rather than by tradition.

It may be helpful to see this in tabular form:

The selections of scripture for Mass during these few days and the choice of antiphon for each day’s Gospel Acclamation, as we will see, put us very much in mind of the expected birth of Christ in Bethlehem.  The readings during the beginning of Advent, however, proclaim the Second Coming at the end of time. This means that there is very good reason to delay the singing of the popular hymn ‘O Come, O Come Emmanuel’, which is based on the O Antiphons, until 17 December.

Each of the antiphons, as used in the Liturgy of the Word, builds on the previous one, starting with ‘Wisdom’.  We are invited to inhabit the heart of the members of the people of Israel and of the Gentiles, of all whom read the prophets and longed for the coming of the Saviour.  The Genealogy of Matthew (Matthew 1) embraces prophecy and announces its gradual fulfilment by God, through the ages, until the sacred moment of the incarnation of the Messiah.  The acclamation speaks of these events being pre-ordained ‘with strength and gentleness’.

The one who is to come will be a wise and kind king and ruler, not like the rulers in the past who turned against the prophets and refused to do God’s will, but rather someone who will lead the people in a benevolent way.

The angel of God foretells the birth of Samson (Judges 13), and Gabriel foretells the birth of John the Baptist (Luke 1).  Luke narrates the latter event as the fulfilment of the long history of God’s benevolent intervention in human history through the ages.  By placing the Gospel text next to the prophecy in the Book of Judges, and combining these with this O Antiphon, the compilers of our lectionary provide us with a window into the inspired historical imagination of the evangelist.  The ‘Root of Jesse’ was given as a ‘sign’, and so we are now ready and anxious for the fulfilment of the long foretold events (‘delay no more’).

20th: Emmanuel or Key of David

The Gospel for today is the wonderful story of the announcement by the archangel Gabriel to Mary of the birth of the longed-for Messiah.  The element of kingship is emphasised, with the understanding that Jesus as Son of God will be a new kind of king.  Jesus, inheritor of the throne of his ancestor, and so holder of the key of David, is to have authority over the city of David, Jerusalem, and the kingdom of Israel.  The beneficence and wisdom of God’s plan over the ages is brought to fulfilment in the birth of the descendant of David.  The key, as well as being the symbol of authority and power, will also ‘open the gates of the eternal kingdom’ and so the Son of God will liberate with the grace of eternal light all who have for many ages been imprisoned by darkness.  The balancing first reading from Isaiah is the prophetic proclamation of the birth of Emmanuel (‘God is with us’).

21st: Key of David or Emmanuel

The message of the first reading, from the prophet Zephaniah, is that there is rejoicing and joy in the land, to such an extent that the people are encouraged to cry out and to raise their hands in praise and exultation.  The energy of the language in this text beautifully balances Elizabeth’s outpouring of joy and ecstatic praise, and the child within her leaps for joy also.  The reason, of course, is that ‘Emmanuel’ is here, present in Mary’s womb, or, as Zephaniah puts it, ‘The Lord, the king of Israel, is in your midst.’

22nd: Root of Jesse or King of the Peoples

The Gospel Acclamation provides the bridge between the thanksgiving of Hannah for the birth of Samuel (1 Samuel 1), which she proclaims on the holy ground of the temple at Shiloh, and Mary’s ‘Magnificat’ prayer in praise of God and of the promise of the birth of the Messiah.  ‘Root of Jesse’ emphasises the lineage of the one to be born, while ‘King of the peoples’ emphasises how the child is regarded by those who have longed for his coming – he will be their saviour.

23rd: King of the Peoples

As we draw closer to the birth of Christ the scripture selected balances the prophecy of Malachi (chapter 3) with the written proclamation of Zechariah in the temple of the name of the final prophet, John.  The anticipation of great and wonderful events fills both passages.  The one to come will truly be ‘corner-stone of the Church’, as the Gospel Acclamation says.

The Gospel Acclamation on Christmas Eve emphasises the drama of the day itself: those attending Mass in the morning are beginning the long day’s wait in joyful anticipation of the first Mass of Christmas at Midnight. The text recognises what is to come, praying that the morning star will ‘enlighten those who live in darkness’.  Its rays are ‘eternal’, thus promising salvation for those who dwell ‘in the shadow of death’. The prophecy of the eternal kingdom descending from David (2 Samuel 7) is balanced by the remarkable ‘Benedictus’ prophecy of Zechariah, in which the whole of salvation history up to that point is summarised in these words: ‘this by the tender mercy of our God who from on high will bring the rising Sun to visit us’.Andrew Cameron-Mowat SJ lectures in Liturgy at Heythrop College, University of London and is the Parish Priest of Farm Street Church.

Walk this Advent season guided by the traditional ‘O’ Antiphons in prayer with Pray as you go and Sacred Space.