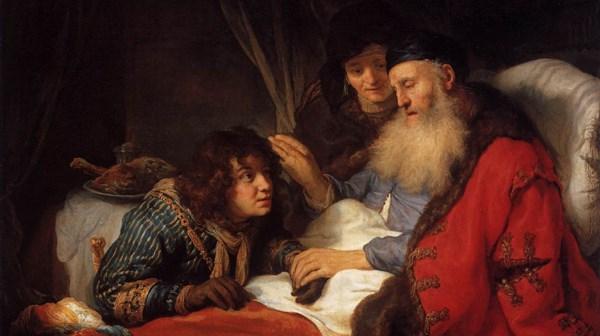 If Jesus was a guest on Who Do You Think You Are?, what would he discover about his family history and what does that tell us, in turn, about God’s plan?  That is the question that Thinking Faith will be asking this Advent in a series based on the genealogy of Jesus in Matthew’s Gospel, which is designed to complement the Advent retreat produced by Pray as you go. Nicholas King SJ starts right at the beginning, with Abraham, Isaac and Jacob, whose stories tell us that God ‘writes straight with crooked lines’.

When you know something about where people are coming from, you can understand them a bit better. Matthew starts his version of the Jesus-story with a selective list of Jesus’s ancestors, presumably as a way of advancing the narrative by hint and innuendo. He has a degree of freedom in handling the matter, since at this point he was not following the model laid down for him by Mark’s Gospel; and so we imagine that he is telling us something quite deliberate when he chooses to begin the story with his genealogy.

It is significant that he starts with Abraham, for Abraham is a foreigner, indeed you might almost call him a Gentile, coming as he does from Ur of the Chaldees; and the last words of Matthew’s Gospel, of course, will be the command to ‘go and make disciples of all the Gentiles’. More than that, however, it was Abraham who was the first to receive the promises of God, and Isaac and Jacob (or Israel) who were part of the working out of those promises. You might observe how rapidly our evangelist gallops over these two, the son whom Abraham so nearly murdered and the grandson who was a trickster even before he was born; but Matthew’s first hearers will not have needed to be told that, for they were brought up (as we perhaps have not been) on the stories of the patriarchs in the book of Genesis.

One of the ideas that you might like to keep in mind, for there is here no space to say everything that is to be said about these ancestors, is that, in the words of the cliché (and it is only a cliché because it is true), ‘God writes straight with crooked lines’. To see how true this is, you will have to read the whole of Genesis 12:1-49:33 (and it will, I promise, do you no harm).

Consider what these three, father, son and grandson, got up to, despite their undoubted loyalty to God. Abram told his wife Sarai (God changes their names into the more familiar form only in chapter 17), when they went down to Egypt, that because of her beauty she was to pretend to be his sister, otherwise the Egyptians might kill him (12:10-13:1). Not content with that, and despite Pharaoh’s reproaches, he repeats the trick later on, when he stayed in the land of Abimelech, king of Gerar (20:1-18). You might think he would have learnt by now.

On another occasion, he disarmed his nephew Lot, because he was afraid that there was going to be trouble between the two households, by offering him the opportunity to settle wherever he chose (13:8-13, which ends with a menacing remark about Sodom, telling us that Lot has made the wrong choice). It is true, of course, that it is Abraham who has the promises made to him, so God is clearly on his side (12:2-3; 13:14-17; 15:1-16; 17:1-8, 19; 18:10); but we should notice that (at Sarah’s somewhat irrational request) Abraham treated his son Ishmael quite appallingly (21:8-19), although God eventually puts things right. We should also notice that Abraham was entirely ready to kill Isaac (22:1-19). Yes, this was at God’s command, and the Book of Genesis regards it as an eminent example of obedience, as does the rabbinic tradition; but we moderns, led by Kant, shudder at the story. Is this the kind of ancestor that you would expect the Messiah to have? It is true, of course, that Abraham is entirely obedient to God (12:4; 13:18; 15:10; 17:23-27; 21:4), that he is a model of Near Eastern hospitality when God turns up at his tent in Mamre (18:1-8) and, finally, that he argues with God to have Sodom spared (18:17-33 – though as things turn out he fails in this attempt). There is a good side to Abraham, as Matthew’s readers would have known.

So Abraham is eminently human; God works through him, and much of the time he does what God tells him, but would you really want your daughter to marry him?

Now for his son, Isaac. It must be said that in comparison with Abraham and with Jacob we are told very little about him. We should perhaps notice that it is not recorded that he ever speaks to his father again after he had that terrible brush with death on Mt Moriah, although he and Ishmael did bury Abraham (25:9), which under the circumstances was gracious of them. His growing up was overshadowed by his mother’s distaste for Hagar’s son, his half-brother Ishmael (16:4-12; 21:8-21), and, no doubt, by his father’s willingness to kill him. At the age of forty (25:20) he finally gets a wife, Rebekah, although he does not have much say in the matter (24:1-67), and he re-enacts his father’s mendacity about his wife being his sister (26:7-11). Finally (27:1-40), his son Jacob deceives him in the matter of the blessing of the first-born. He has only one wife, and no concubines, so there is nothing much at all to his life, beyond the fact that he was 180 when he died (35:28).

What about Jacob, then? He was (just) the younger brother of Esau, though it seems that he may have attempted to remedy this disparity in the womb (25:26); certainly it was the beginning of some fairly major sibling rivalry. It must be said that none of these three patriarchs was particularly skilled in the undeniably difficult business of parenting, and so as we notice that Isaac loved Esau (the hunter) more than Jacob, we say to ourselves, ‘there’s trouble brewing here’. Rebekah loved Jacob, the quieter one, and it was she who organised the deathbed trickery that gave Jacob rather than Esau the ancestral blessing (27:1-40). Then there was the remarkable episode of the ladder and the angels (28:10-17), which, for the author of John’s Gospel, seemed like a foreshadowing of what Jesus would be.

Jacob got married to first Leah and then her sister Rachel (though it was the latter whom he favoured); and then Laban, his father-in-law and uncle, tricked him into a waiting-period of some fourteen years (29:23-27). He is said to have been very angry with Rachel for her failure to produce children (30:2). To cope with this, she gave him her maid Bilhah, who did the necessary, producing Dan (30:6) and Naphtali (30:8) as sons for him. Then when Leah realised that she was no longer producing children, she repeated the same trick, and gave Jacob her maid Zilpah as wife, and she produced the child Gad (30:11); but later on and slightly to the reader’s surprise, Leah, through some skulduggery with mandrakes, produced two more children, Issachar (30:18) and Zebulon (30:20). Eventually Jacob flees with his two wives, and God warns Laban not to pursue the matter (31:29), even though Jacob has out-tricked his father-in-law (30:37-43); so they part amicably (31:48-55).

Immediately after this political shenanigan comes a remarkable set of encounters with God (32:1-2), in the light of which Jacob is able to make peace (at last) with his brother Esau (32:6-21; 33:1-16). These last two narratives sandwich the astonishing story of Jacob defeating God in a wrestling match (32:24-31), which tells us something about his significance.

It has to be said, though, that like his grandfather and father, Jacob does not handle his children well. He makes a mess of the situation that arises after the rape of his daughter Dinah (34:1-31), and leaves Simeon and Levi to avenge her in the most horrible way. He shows a foolish favouritism for his youngest son, Joseph, with potentially catastrophic results; and he believes what his other children tell him, that a wild animal has eaten Joseph. This leads into one of the great biblical stories (39:1-49:33).

All is not lost, however, and God is still in charge; Joseph becomes the spokesman for what God is doing, and is the one who is in a position to say that ‘God sent me before you to preserve life’ (45:5), and ‘God meant it for good, to bring it about that many people should be kept alive’ (50:20).

We should notice that Abraham is a man of faith, who is learning all the time, even when he gets things wrong. When Jacob stole the blessing and status as first-born, our generous God (and a magnanimous Esau) finally gave him what he had stolen. And Jacob and his twelve sons are, as Joseph points out, redeemed from a family with a depressed father and murderous sons to a healed family of 70! The reconciling work of God is clearly operating in their lives.

And there lies the clue. Matthew, in the second verse of his gospel has given us three ancestors of Jesus who carry the message that God is at work, not just in these three rather complex lives, but in the whole of the story: from the first giving of the promises to Abraham to their apparent fulfilment in David; from David to the catastrophe of the Exile; from that disaster, where it seemed that God’s promises were no longer operative; to the appearance of Jesus in whom all God’s promises were (after all) fulfilled. So we need not be afraid to read these unskilled parents, unpromising ancestors of our Messiah, as a sign that God can indeed ‘write straight with crooked lines’.

Nicholas King SJ is a tutor in Biblical Studies at the University of Oxford.  He is currently on sabbatical, teaching at Boston College.

Advent Examen: 3. The story of my life

The Challenge to Live Simply