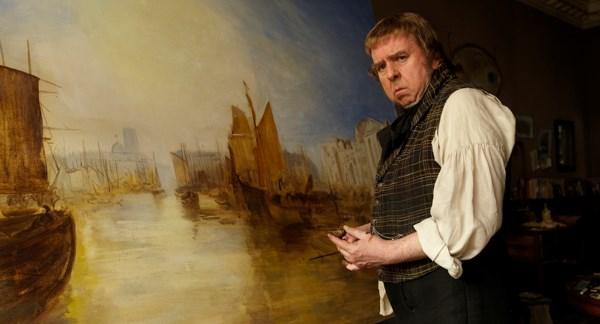 What happens when one artist, using his own medium of the cinema, explores another whose medium is canvas and paint?  The answer is not to be found in some theoretical exposition but in the experience. Mike Leigh’s Mr. Turner needs to be seen, for it aims to be as much of an aesthetic experience as is the work of its subject, the celebrated and experimental painter, J.M.W. Turner.

Although not denying its period and circumstances, Turner’s work, like that of all great art, has the capacity to teach us how to see and understand again and again. The same is true of Leigh’s film. This is partly because the director is constantly inviting us to look, not just to admire or analyse but to enter into a much more attentive relationship. Turner’s inarticulacy and therefore the sparseness of the dialogue, combined with Gary Gershon’s beautifully searching and penetrating musical score, make us ‘see’ both visually and emotionally. Like Turner’s paintings, though, Leigh takes us beyond ‘mood’ to explore the nuances and complexities of the natural world, and of our relationships and the interior world which is expressed in and through them. Visually, yes, in the carefully framed colours of each scene which allow us to move easily from the compositions of the film to the compositions of the canvases; but also in the textures of the human relationships: we see into the pain, humanity and sometimes brutality of Turner and those around him. Like Turner, Leigh has found a way to show us that light is never just on the surface but moves from within as well as from without. Mr. Turner is a taut film which comes from the very tension and struggle at the heart of all artistic creation.

Timothy Spall, in a finely-paced performance, manages to capture all of this. Although there is so much about Turner which is visually and morally unattractive, Spall never lets him become caricature. Always our sympathy is engaged; neither Spall nor Leigh appeal to the cheap option of the romantic myth that genius absolves the artist from humanity, giving him room to act in appalling and abusive ways to those around him. Rather, we are given a complex picture of Turner: the dynamic chiaroscuro of his inner world, with its ugliness as well as its dedication to his art; and the pain and humiliation brought by the shifting public and professional fashion. Often with gentleness and humour, we see the complexity of his relationships – especially those with his father and his mistress, Marion Bailey’s nuanced and moving Mrs. Booth, in whom Turner sees something beautiful beyond the mere physical and she in him. If these remind us of one side of Turner, then the loneliness of Hannah Danby (Dorothy Atkinson), whose need of affection makes her vulnerable to exploitation by Turner, presents us with the other. There is also a ruthless dedication to his art, which is softened from time to time but is neither disguised nor glorified.

Like Turner’s own art, the whole film is an exploration of light. A central scene depicts Turner’s attempt to give a lecture on the nature of light to the Royal Academy. He is fascinated by the paradoxes of light; his exposition, however, is anything but lucid. Language is simply not his medium and yet his paintings, and Leigh’s own cinematic lingering on the scenes that inspired them, have a visual lyricism. Leigh shows us a Turner exploring the ‘soul’ of light – not just as a medium but as a reality – in the moods evoked by his paintings, perhaps none more so than the popular but elegiac ‘The Fighting Temeraire’. It is a painting that marks the transition from the rural to the industrial, from the romanticism of the age to the new aesthetic of iron, steam and industrial modernity.

Mr. Turner invites us to experience the reality of paradoxes, not least that there is a sort of noble visual and inner articulacy to the very act of dying, because the vision continues in the art – art, in fact, is somehow set free and becomes the artist’s unattached gift to us. In fact, three quarters of Turner’s paintings were never seen in his lifetime. These ‘facts’ of Turner’s life are only alluded to in the film, for it is not Leigh’s purpose to produce a biography. Instead he has given us a subtle, multi-dimensional study of the artist and the art and, as in all his work, Leigh allows light to fall on the human.

If there is one curiosity about this film it is the portrayal of John Ruskin. Ruskin was one of the most sensitive and appreciative critics of Turner’s work. It was he who grasped Turner’s language of light and, as Kenneth Clark observes, ‘Ruskin is at pains to prove that colour is what Matthew Arnold said of poetry, a criticism of life.’ Yet Leigh gives us a comic, superficial Ruskin (although finely played by Joshua McGuire), who is immature and adolescent; a narcissistic babbling brook of theory, in contrast to Turner’s massive, mature and experienced presence and depth. It does, however, act as foil. Maybe in Turner’s reaction to Ruskin we see something of Leigh’s own reaction to the academic eunuchs who spin their self-delighting threads from an artist’s cloth. A scene in which Ruskin expounds the significance and technique of Turner’s work not only offers another comic moment but another visually beautiful set – almost a Dutch interior.

There are many excellent films which one can appreciate but would not want to see again immediately. Mr. Turner needs to be seen many times, and each time there will be something to discover.