Skip to main content
Photo by Wellcome Images at flickr.com 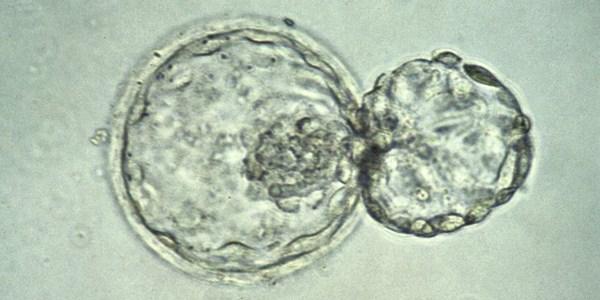 What do you do with frozen embryos when their parents have split up and their genetic mother wants them to remain frozen, whereas their genetic father wants them gestated by a surrogate so that he can father them and bring them up? It is hardly an everyday predicament but it is one in which a famous actress now finds herself, and so the situation has generated headlines and comment over the past few days. Agneta Sutton sets out the Church’s view on the issues at hand.

On 29 April 2015, The New York Times published an article by Nick Loeb, the ex-fiancé of actress Sofia Vergara, best known for her role on the television show Modern Family. The article is about their dispute over two frozen embryos.

In 2013 the couple agreed to use in vitro fertilisation and employ a surrogate to have children, but the couple have split up since that agreement was made. Vergara, who already has a 20-year-old son from a previous marriage, is now engaged to someone else. According to a statement made to People magazine by her attorney, ‘Vergara, who has happily moved on with her life, is content to leave the embryos frozen indefinitely as she has no desire to have children with her ex, which should be understandable given the circumstances’. [1]

Nick Loeb, on the other hand, wants a surrogate to carry the embryos to term so that he can raise them. He says he would pay all the expenses involved and would declare Sofia Vergara the egg donor.

The legal situation is complicated: when Vergara and Loeb agreed to use IVF and a surrogate, they signed a form stating that any embryos created could be brought to term only with both parties’ consent. However, the form did not specify, as California law requires, what should happen if the couple separated. Loeb is now seeking to have that form declared void.

Ethically, the situation is no less complex, and Loeb himself raises many of the pertinent questions:

In this short article I will set out briefly what Catholic teaching says in response to some of these questions. Vergara and Loeb both have Catholic backgrounds (she practises the faith; he claims to have been strongly influenced as a young boy by the Catholicism of his nanny), but whether the Church’s stance played a part in their initial decision to pursue IVF via a surrogate is an open question.

In 1987, the then Cardinal Joseph Ratzinger, as head of the Congregation for the Doctrine of Faith (CDF), signed an instruction that addressed many of the ethical issues then beginning to emerge about reproductive technologies. The document was entitled Donum Vitae – ‘the gift of life’. According to Donum Vitae, Catholic couples are no more permitted to separate the unitive and procreative good of spousal intercourse by IVF or surrogacy than by means of contraception, for, ‘from the moral point of view procreation is deprived of its proper perfection when it is not desired as the fruit of the conjugal act, that is to say of the specific act of the spouses’ union’.[3] Furthermore, in the case of surrogacy, even if the child is created by IVF with gametes from the commissioning couple, the process ‘offends the dignity and the right of the child to be conceived, carried in the womb, brought into the world and brought up by its own parents’ – that is, its genetic parents. The surrogate is, as Donum Vitae puts it, ‘genetically a stranger to the embryo’. [4] With surrogacy, as with any form of gametal donation, whether or not donors are paid, there is an exchange of goods. The gametes are treated as commodities. Therefore, the child too is treated as a commodity. In surrogacy, not only are gametes and/or embryos treated as commodities, but so too are women, since surrogates are hired as temporary incubators.

With regard to assisted reproduction Donum Vitae also declares:

The one conceived must be the fruit of his parents’ love. He cannot be desired or conceived as the product of an intervention of medical or biological techniques; that would be equivalent to reducing him to an object of scientific technology. No one may subject the coming of a child into the world to conditions of technical efficiency which are to be evaluated according to standards of control and dominion.[5]

According to current church teaching, IVF is such an ‘intervention’, even in a case where a couple’s use of IVF involves neither embryo selection and destruction, nor gametal donation or surrogacy. Many people find the Church’s official position difficult – why, in this situation, should the child not be seen as a fruit of parental love? Could it not be seen as a gift from God? Surely, there is no reason to presume that a child conceived via IVF in this manner, to parents who are otherwise sterile, is not welcomed as a gift and member of the family in the same way as if it had been naturally conceived. It must be acknowledged that, like contraception, IVF is practised by Catholic couples who see neither practice as less natural than wearing spectacles, and who argue that neither contraception nor IVF within marriage spoils the unitive dimension of their married love.

So how does all this apply to Nick Loeb and his desire to see the frozen embryos brought to term? Of course, the Church recognises the embryo as a human being to be respected. Quoting the ‘Declaration on Procured Abortion’, Donum Vitae declares: ‘From the time that the ovum is fertilized, a new life is begun which is neither that of the father nor of the mother; it is rather the life of a new human being with his own growth. It would never be made human if it were not human already’.[6] And also: ‘The human being is to be respected and treated as a person from the moment of conception; and therefore from that same moment his rights as a person must be recognized, among which in the first place is the inviolable right of every innocent human being to life’. [7]

But when the embryos have been frozen, their genetic mother wants them to remain so, and a surrogate mother would therefore be needed to gestate the embryos and give birth to them, is this right to life so straightforward? Could the Church allow surrogacy as a means of rescue for the unwanted embryos? There is a more recent church document, Dignitas Personae (‘the dignity of a person’) issued by the CDF under Cardinal William Levada, that tackles this question head on, and suggests that the answer is ‘no’.

It has … been proposed, solely in order to allow human beings to be born who are otherwise condemned to destruction, that there could be a form of ‘prenatal adoption’. This proposal, praiseworthy with regard to the intention of respecting and defending human life, presents however various problems [… ] All things considered, it needs to be recognized that the thousands of abandoned embryos represent a situation of injustice which in fact cannot be resolved. [8]

So are these embryos to be condemned to destruction after all, even in situations where embryo adoption could seem to be an agreeable solution – if the adoptive birth mother were to keep the child, for example, and/or she were the wife of the man who had fathered the embryo(s) and the couple intended to bring the child(ren) up together?

These are questions with no easy answers, for Nick Loeb and Sofia Vergara, and for many other Catholic couples. Where there are difficult decisions to be made, we can hope that those charged with making them will be guided by the desire ‘to safeguard the vulnerable condition of human beings in the first stages of life and to promote a more human civilization.’[9]

Dr Agneta Sutton is a Visiting Lecturer at Heythrop College, University of London, teaching sexual ethics and bioethics at undergraduate and postgraduate levels.