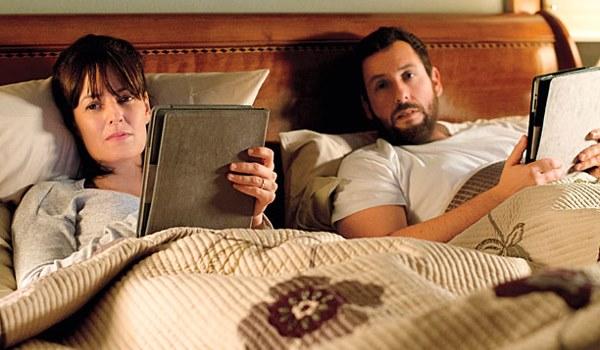 Nobody wants to be told what to do.  Especially when it comes to sex.  This is why the Catholic Church can be so [insert expletive] annoying.  Why can’t priests just mind their own business and keep their noses out of other people’s bedrooms?  Anyway, aren’t they supposed to be celibate, and so professionally ignorant on the subject?  Most of us are adults, we should like to think, and able to sort this out for ourselves.

Take Men, Women & Children, for instance.  If ever there were adult efforts to look the question of sex straight in the eye and dispel the stigma, this is one.  A man masturbates using his child’s computer.  A mother earns a side income posting photos of her daughter.  A teenager is so accustomed to pornographic variety that ‘RL’ (real life) is not all that interesting anymore.  This is what the film shows us, and at the end of 119 irretrievable minutes, the point is made.  We have a problem.

And it would seem that technology is a big part of that problem.  This film mediates our contemporary sexual complexities through the gadgetry of iPhones, video streaming and password-protected websites; but not enough is done to relate these to the perennial predicament to make it particularly engaging.  Undying questions of bodily identity, romantic intimacy and familial responsibility are all coyly entertained, but only in the slim margins, as it were, of a chunky picture book of modern maladies.  An estranged wife joins an online group dedicated to starting extramarital affairs.  A father scrolls through his son’s browser history and gets nostalgic for the old days of pornographic magazines hidden underneath beds.  An anorexic teen texts her indifferent, one-time lover from the hospital: ‘I’ve just had your miscarriage’.  What comes across as a laundry list of evil technologies begins to feel like somebody airing their linens before putting them through the wash.

The cinema is not the confessional, and problems do not get solved simply by blowing them up on the big screen.  Neither will they be solved by blowing up all the smartphones and computer screens.  Technology isn’t the issue, really.  The issue is desire and what to do with it.  It is precisely in this area that the celibates might not be so ignorant after all and, however odd it sounds, may have even amassed some serious experience.

In our Hollywood, YouTube, BuzzFeed world, crammed to bursting with sexual imagery, there is an image which seldom pops up.  It might be called the spiritual secret of celibacy, and it is the image of sex as a gift.  Everybody knows that Catholics call marriage a sacrament, but not everybody quite knows what that means.  A sacrament has been summarised as ‘a visible sign of invisible grace’, and this translates into non-theology-speak like this: a sacrament is what you can look at and see what God’s love is like.  Marriage, not sex, is a sacrament, but sex is the climactic expression of that self-gift which is the essence of love.  Catholics have always understood marriage to be a symbol of Christ’s love for his Church so, it follows, really great marital sex will give you a pretty good idea of the intimate mystery that Christianity is all about.

This is why priests go around sticking their noses in other people’s bedrooms (metaphorically, of course).  Because to get sex right is to open up a window into the nicest, truest thing there is.  It is to know the purpose of human life and to participate in it.  And to have a jolly good time while you’re at it, so I am told.  This is half of the secret that the celibates keep for us, that sex is a symbol of divine gift.  The other half is this:  you don’t have to have sex to give that gift.  Since sex is fundamentally about giving yourself, there are approximately seven billion – how many people are there? – ways to do it. In a world so wide open with possibilities, nobody’s going to tell you precisely what to do.  This is your chance to be creative. Which means there are lots of things one needn’t bother to look at online, or watch in the cinema, for that matter.