Skip to main content
'The Magic Mountain' by Thomas Mann 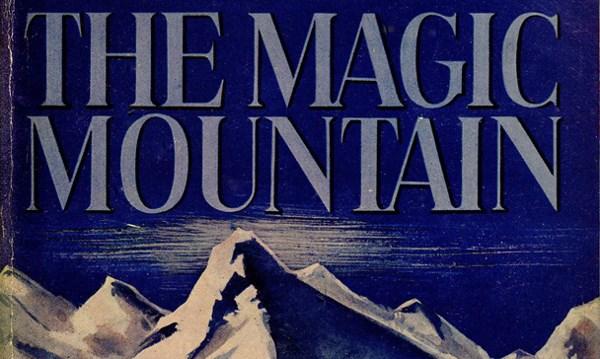 Published in 1928, Thomas Mann’s tale of life in a Swiss sanatorium sees its protagonist being pulled in two opposing directions as he struggles to discern the essence of the human condition. Michael Kirwan SJ recommends this story of a quest for authentic wisdom, a crucial part of which is an engagement with the sickness that pervades the novel, acting as a metaphor for pre-War Europe.  Mann himself thought that you really must read The Magic Mountain…twice!

In his note on ‘The Making of The Magic Mountain’, written 25 years after the novel’s publication, Thomas Mann makes of his readers a ‘very arrogant request’, that it should be read not once but twice, in order for the richness of its composition to be fully appreciated (unless it really has been a boring experience, in which case the reader is excused …). Originally published in 1928, it is what the Germans call a Bildungsroman, the story of the educational formation or initiation of a young, usually naive hero. Mann specifically associates this novel with the Quester legends in search of the Grail, which stands for knowledge, wisdom, consecration, the elixir of life.

A ‘novel of ideas’, therefore: but these ideas are embodied in a particularly distressing and graphic context. The action is set in House Berghof, a sanatorium in the Swiss mountains (Mann stayed at such a sanatorium in Davos in 1912). All the patients are living with tuberculosis or similar conditions; many arrive expecting their treatment to be swift and straightforward, but end up staying for many years. Those who recover enough to leave find that they are now totally unsuited to life in the ‘flat-land’, and eventually have to be readmitted.

Hans Castorp, the hero of the novel, arrives at the Berghof to visit his cousin, a long-term patient, for what he thinks will be a stay of three weeks. Unfortunately, a medical examination reveals that Hans too is sick; his stay at the clinic in fact lasts seven years. Castorp is bourgeois and fastidious, an engineer by training and decidedly unimaginative by temperament. As he becomes used to the routine of the clinic, however, and to the introspection which it forces upon those who live there, his mind opens out into philosophical and even mystical speculations. These are fostered by intense conversations with two other patients, Herr Settembrini and Herr Naphta, whom we will discuss below. The feverish atmosphere of the sanatorium produces what Mann calls an alchemical enhancement or ‘heightening’ (Steigerung), which transubstantiates this rather ordinary and unexciting individual into someone capable of transformative adventures.

What has all this to do with the First World War? In a novel of over 700 pages, only the last four depict the ‘thunder-peal’ in the flat-land, where we see Hans Castorp for the last time, stumbling desperately across a battlefield, fire falling from the heavens. The sickness which dictates all aspects of life in the sanatorium is, of course, a ‘metaphor’ for pre-war Europe, though the meaning of The Magic Mountain is more complex. Mann makes clear that the quest for authentic wisdom has to pass through an engagement with sickness and death. The hero finally ‘strikes a pact’ with the unknown world and its dark forces. He comes to see that we must neither rationalistically deny these dark powers, nor should we allow ourselves to be overwhelmed or fascinated by them.

The goal, the wisdom of the Grail, is discerned in an extraordinary chapter towards the end of the novel, entitled ‘Snow’. Hans is walking in the mountains, and has got lost. Exhausted, but fortified by a swig of port, he undergoes hallucinations: firstly, an extraordinary benign vision of paradisal harmony, a luxuriant park peopled by beautiful young human creatures, Mediterranean ‘children of sun and sea’. The pastoral vision is followed by a much more disturbing one: he dreams a sanctuary with bronze doors, in which ‘two grey old women, witchlike’, are dismembering and devouring a child, shouting obscenities at him in his own Hamburg dialect. Later, back in the ‘civilised’ warmth of the Berghof, Hans reflects that the visions – reason and recklessness, ‘man’s state, his courteous and enlightened social state; behind which, in the temple, the horrible blood sacrifice was contemplated’ – must belong together.

Such a depiction of the ‘contrary states of the human soul’ is not unique to Thomas Mann; the shock of the juxtaposed visions, arcadian and cannibalistic, reflects Mann’s interest in Friedrich Nietzsche, the unmasker of ‘civilised’ facades. This does seem to be an especially Modernist concern; we may compare W.H. Auden’s verse from Vespers, in which he couples the ‘Arcadian’ and the ‘Utopian’. Each must acknowledge their need of the other, because each ignores an aspect of the foundational blood sacrifice (Bauopfer) underpinning all social existence: ‘But for him I would forget the blood, but for me he would forget the innocence’.

To this extent, Hans has to part intellectual company with his conversation partners, Naphta and Settembrini, ‘both talkers, the one luxurious and spiteful, the other for ever blowing on his penny pipe of reason’. Each stresses, as mutually exclusive, the two sides of the human condition which Hans now needs to keep together. Settembrini is an articulate rationalist and freemason; Naphta, fanatically misanthropic, is a convert from Judaism, a Jesuit who has been invalided out of ministry. The two men argue bitterly about the merits of reason and enlightenment, until finally Naphta is provoked into challenging the other to a duel. The pacifist Settembrini thinks the whole business is ridiculous, but he goes along with the preparations. When they face each other with pistols at dawn, Settembrini fires his shot high into the air, and braces himself ready for his opponent’s turn. Naphta angrily demands that Settembrini fire again. Upon the latter’s refusal, Naphta shrieks ‘Coward!’, and shoots himself in the head.

The Magic Mountain satisfies to some extent because of its capacity to incarnate ideas in vivid characters such as these two protagonists, whose interaction is reminiscent of a morality play. It works provided we have enough initial sympathy for Hans Castorp to want to accompany him, in his quest and in his choices. We feel he is right to refuse to ‘choose’ between Naphta and Settembrini, each offering only a guazzabuglio of God and the devil, a ‘confused noise of battle’ – the Italian term translates as ‘mishmash’ or ‘jumble’. Mann, who later becomes the most important German writer in opposition to National Socialism, does well to announce, through Castorp, that both the denial of the mysterious dark, and an intoxication with it, lead to disaster.

And yet, from a Christian perspective, this feels inadequate. Rejection of the shrunken gods of rationalism and of religious fanaticism can only be a first step, to be followed by a recognition of the one self-offering – Christ’s – that brings it about that ‘no-one is sacrificed’. To which Mann might respond that it is precisely the sacrifice of Christ that ‘Christian’ Europe chose to ignore, preferring instead to tear itself to pieces. Nevertheless, it would be important to explore further the analogy between the journey of ‘intensification’, which Mann describes in terms of alchemical transformation and quest mythology, and a ‘sacramental’ imagination which similarly invokes a heightened awareness (Steigerung) of sympathetic unity and connection, yet surely effects and grounds a more authentic conversion and discipline of life.

The duel between Naphta and Settembrini is the last incident to take place in the House Berghof. After this, the action finally moves out into a wider panorama. The final chapter is entitled ‘The Thunderbolt’; that ‘deafening explosion of long-gathering magazines of passion and spleen’ which fires the mine beneath the magic mountain. It sends Hans ungently back to the flat-land, ‘a man who, despite many warnings, had neglected to read the papers’. In the final pages, Hans and his comrades are hurling themselves towards the enemy. We are given one last glimpse of this ‘genial sinner’ who is dispatched on his way in a kind of prayer: ‘Farewell, honest Hans Castorp, farewell, Life’s delicate child!’ The final words of the novel speak, once again, of the ambiguous and costly knowledge he has won:

Adventures of the flesh and in the spirit, while enhancing thy simplicity, granted thee to know in the spirit what in the flesh thou scarcely couldst have done. Moments there were, when out of death, and the rebellion of the flesh, there came to thee, as thou tookest stock of thyself, a dream of love. Out of this universal feast of death, out of this extremity of fever, kindling the rain-washed evening sky to a fiery glow, may it be that Love one day shall mount?

Michael Kirwan SJ is Head of Theology at Heythrop College, University of London.