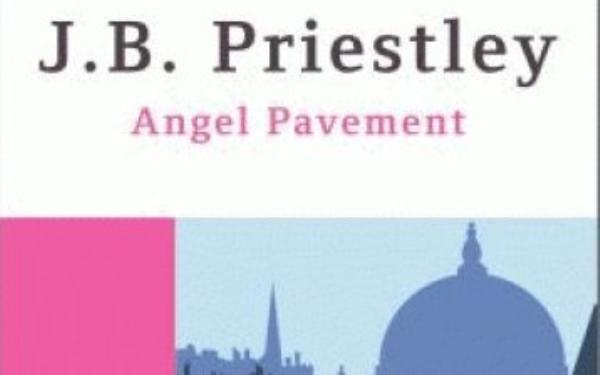 Are you looking for a novel that you can really get your teeth into this summer? Look no further! We have asked several friends of Thinking Faith to nominate one work of fiction, from any era, and tell you why ‘You really must read’ their chosen book. Simon Potter recommends our first title: J.B. Priestley’s Angel Pavement.

As I type this on the hottest day of 2013 in the UK so far, I am reminded how much we all like the idea of London on normal, cool days – and the London of Angel Pavement (published in 1930) is chilly, the book’s climate wintery. Its evocation of dark City streets, the grim glory of the old Docklands, hot-water bottles in spinster digs, the garish pseudo-luxury of brightly-lit Lyons Corner Houses, and the long, smoke-filled journeys by tram and bus to near-genteel suburbs, captures a London just outside the memories of the reader born in post-war Britain, but not too far away from them to lack resonance.

As we know from what is currently his most well-known work, An Inspector Calls, J. B, Priestley was fascinated by the impact that an observant outsider has upon a closed world of incompetents trapped by habit and necessity. Of his other works, The Image Men (about two charismatic rogues who come to a white-tile university) has fallen out of fashion, so too have English Journey and the sentimentally mushy The Good Companions. However, the sharp Angel Pavement is worth all of them put together, handling the author’s central themes and concerns with a wit, a comic force, a menace and a pathos unmatched by his other fiction.

Priestley (at heart a fire-and-brimstone Dissenter) was a passionate commentator on the state of England – it was what characterised his post-war radio broadcasts – and he had a northern playwright’s superb ear for dialogue and a cynical but tolerant eye for the niceties of character and social nuance. Although he is remembered now as a pipe-puffing, ‘ho-ho’, jolly Bradford lad, we can discern beneath the surface a tortured concern and compassion for those who have no social, religious or personal resources, and for the effect of materialism and untrammelled capitalism on the economically fragile who are incapable of change – sensitivities much of their time, but, since 2008, of ours too. Such ordinary Londoners are the ready victims of adventurer James Golspie and his glamorous daughter, Lena, who burst upon the city by ship determined to make a fortune. Their arrival is described with Conradic detail reminiscent of the great swallowing-up of the vessel in The Nigger of the Narcissus.

Golspie’s purpose – to enter into partnership with the unintelligent, uninspired public-school director of City firm, ‘Twigg and Dersingham’ – is beautifully observed. I always enjoy re-reading one of the novel’s entertaining set pieces: a dinner-party in the chapter, ‘The Dersinghams at Home’. Each guest (the peculiar Miss Verever, ‘who displayed an uncomfortable amount of sharp, gleaming bone’; old school chum, Major Trape; the lonely ex-colonial Pearsons; and the screech-voiced and desperate Mrs Dersingham) is mercilessly described. Set pieces dictate the structure of a very long novel (500 pages) which consists of only 11 chapters. In each, one of Twigg and Dersingham’s small staff is pinned to Priestley’s microscope-plate. His choice of names for them all is inspired: there is the chief clerk, Mr Smeeth (note the deliberate genteel-ing of ‘Smith’) and his pathetic fears for the firm’s solvency and eager upward aspirations (his evening at his first concert of classical music, while sharp and funny, is very moving); there is his junior, Turgis (who falls desperately in love with Lena – and note the not-quite-British exoticism of her name – with miserable results); there is Lillian Matfield, the fat, but sexy and emotionally-raw secretary who fears being left on the shelf (and who has a messy affair with Golspie); Poppy Sellars, secretly in love with poor Turgis; and Stanley the office boy, who lives in a filmic world of intrigue. One by one, they are faced – through association with the tough, unprincipled Golspie – with their sad inadequacies, and each responds according to his or her character.

The ironies and comic absurdities of the book’s plot and the failings of its helpless characters do not, however, prevent us from being involved in and moved by their plight. I imagine that a small cog in Lehman Brothers, packing up his desk after the crash, would have felt that same terrifying gulf which lies just beyond the toes of the not very clever and not very rich in a world propelled by speculation.

And Angel Pavement itself? ‘Many who know the City will…admit that they do not know Angel Pavement.’ Chapter 1 paints a vivid picture of this grey cul-de-sac with ‘Chase and Cohen, Carnival Novelties’ at the end, and ‘The Pavement Dining-rooms’, ‘Dunsbury & Co: Incandescent Gas Fittings’, ‘T. Benenden, Tobacconist’ and ‘C. Warstein: Tailor’s Trimmings’ along its length. ‘Twigg and Dersingham’ is found on the first floor of No. 8, ‘once a four-storey dwelling-house where some merchant-alderman lived’, between the offices of ‘Kwik-Work Razor Blade Co’ and ‘Universal Hosiery’. Everything about it suggests failure and vulnerability – but we soon come to root for it and the low-wattage decency of its little people lost in the ‘million-footed man-swarm’ of London. The upsetting ending of the novel is not, perhaps, a shock, but a reminder that complacency and narrow horizons are no armour against the buccaneer.

‘I never liked London,’ says Golspie’s new acquaintance as, together, they prepare to board ship to leave. ‘I couldn’t get on with Londoners…they thought they were smart.’ ‘They’re not,’ said Golspie. ‘I soon found that out.’ I think it interesting that Golspie and Lena, like Romans or Vikings, come up the Thames for what they can get and afterwards return to the sea.

This terrific and most readable of novels was a loud wake-up call to an England resting on its 19th century laurels; as John Baxendale (Sheffield Hallam University) has pointed out in recent correspondence in The London Review of Books, Priestley depicted ‘a nation cut off from a prewar past, which in any case wasn’t worth going back to, but unable to make the leap to a better future.’ We see Angel Pavement now, perhaps, as a brilliant portrait of a black-and-white era, lost, but infinitely dear and familiar.

'Interpreter of Maladies' by Jhumpa Lahiri