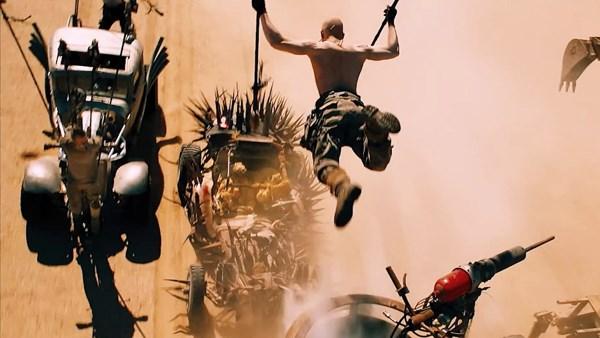 From the director of Happy Feet and Babe: Pig in the City comes… Mad Max: Fury Road. The title of the film is a good indication of what can be expected from George Miller’s much anticipated return, after a long absence, to the lucrative Mad Max franchise once popularised by Mel Gibson.

There is an assault on the senses from the outset as we are re-introduced to Max Rockatansky (Tom Hardy), an outlaw trapped in a stark, burnt-out wasteland that looks like something from Dante’s Inferno. He is captured by the powerful and tyrannical leader, King Immortan Joe (Hugh Keays-Byrne), and used as a blood supply for the half-dead minions who mindlessly carry out Joe’s bidding. Resources are in short supply for the malnourished population of the King’s citadel – although not for King Immortan Joe himself, of course, who gorges on the harvested breast milk of women he keeps captive.

King Joe needs gasoline in order to keep the people of the citadel at arm’s length and to fuel his wanton greed. The task of collecting gas falls to Imperator Furiosa (Charlize Theron). However, in an attempt to deliver them to safety, she smuggles from the citadel King Joe’s five wives, whom he keeps under lock and key (literally) for breeding. When the cult leader is alerted to this audacious, defiant act, hell spills forth and the ensuing chase lasts for the rest of the film.

The premise of the film is simple but the execution is impeccable. The heat and barrenness of the desert landscape echo the setting of classic Western chase films. But Miller’s take on this genre is grotesque, far more melodramatic and overblown. The rabid droogs rain out bullets from the windows of their gas-guzzling monster trucks, while the sound of industrial heavy metal screams out from a contorted figure wielding a fire-shooting guitar. The display is one of nihilistic pandemonium and there is something captivating, something thrilling about this chaos. The sheer spectacle of pain is designed to be hilarious and sickening, yet strangely exhilarating.

There is some plot, but perhaps not enough.  Max has managed to escape from the carnival of suffering and joins the rather more wholesome company of Imperator Furiosa and the wives of the king who, despite their ethereal beauty, are rebellious and strong, not afraid of fighting the foot-soldiers pursuing them. The appearance of the older women towards the end of the film bolsters the film’s credentials as a feminist action movie, a challenge to a genre that has in the past been very male-oriented.

There isn’t a huge amount of dialogue, and relationships between the characters are forged by a necessity to survive rather than any real emotional connection. Tom Hardy and Charlize Theron’s characters are both stoic, and we only get flashes of their vulnerabilities and their backstories – perhaps something that will be explored in forthcoming instalments. However, Nicholas Hoult puts in a fantastic performance as a disillusioned foot-soldier who rejects his suicide mission and turns away from the King who falsely promises him immortality.

There are many questions left at the end of the film, but the key to enjoying this film is to accept it for the sensory spectacle that it is and be overwhelmed by that. You could even see it is as a call to arms: a warning of what could happen if humanity continues down its own selfish road of burning fossil fuels at the expense of the planet. In terms of action films, George Miller has managed to create something that is truly original and will stand out against the homogenous glut that the genre has become.