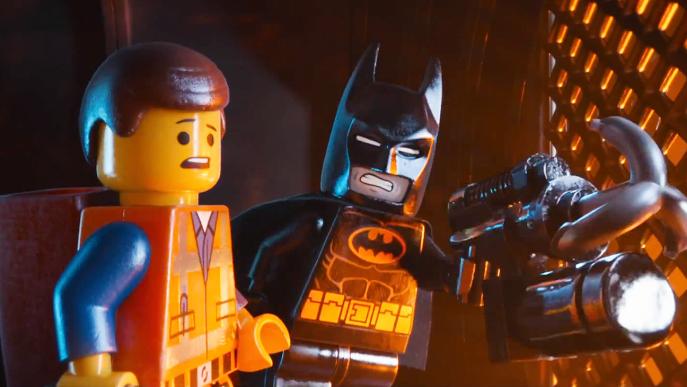 The Lego Movie opens with the life of toy character Emmet Brickowski (voiced by Chris Pratt), who is just another average Joe in Lego land. He lives to follow instructions: he obeys the speed limit, purchases over-priced coffee, laughs ritually at the sitcom Where are my pants?, and can sing along for hours at his construction job to the hit radio jingle ‘Everything Is Awesome!’ By all outward appearances, he is unremarkable and happy.

One day after work he meets a girl (Elizabeth Banks), is left unconscious after falling down a hole and wakes up mysteriously fused to the oddly-shaped ‘Piece of Resistance’. This red bit of plastic does not connect with anything else in Lego land and comes to designate his destiny: it marks him out as ‘The Special’, ‘the greatest, most talented, most interesting, most important person of all times’, whose end, no less, is to save the world.

This is because, unbeknownst to the blithely rule-following workaday populace, Lord Business (Will Ferrell) and his army of automated micromanagers are preparing to freeze everything into despotically-imagined ‘perfection’ through the ultimate weapon in a universe of plastic, ‘The Kragle’ (which turns out to be a letter-worn tube of Krazy Glue). To stop this, a heroic team of ‘Master Builders’ has assembled – Lego Batman, Dumbledore, a so-called Unikitty, Shaquille O’Neal, and many more – which is now looking to be led by our unprepossessing protagonist.

For a story ostensibly about colourful toy bricks, what follows is conceptually heavy-hitting and theologically profound. As the adventure unfolds, Emmet (whose name means, in Hebrew, ‘truth’) learns about ‘The Man Upstairs’ – the human, and therefore God-like relative to the denizens of Lego, builder and sustainer of the world. Lord Business’ villainous, life-strangling control-hold, we discover, is motivated precisely by uncertainty about his place in a cosmic meta-narrative, and he is transformed – not, we note, banished or destroyed – once he discovers that every person, including himself, is ‘The Special’. Even the land of Lego, while materially concrete, in a sense only lives, moves and has its being in the imagination of The Man Upstairs who, it turns out, might be interpreted as something more mysterious than a mere human individual: the animation of the world seems to proceed from the love a child shares with his father for a world they both have made.

But perhaps the most profound theology in what also works, at one level, as a colourful and upbeat children’s movie, is its treatment of creativity itself. Rather than reverting to a problematic, post-Romantic image of the artist as an isolated genius, antisocial and untouchable in his inspiration, the film offers a deeper and truer picture. In Lego land the spirit of creativity is also the spirit of cooperation. World-building here demands more than mere brilliance; it also requires a risk of appreciation of and deference to the unforeseeable inspiration of others. Batman cannot save the world by himself, it turns out: what is required are persons who have been inducted into the cosmic mysteries of becoming childlike and playing a part.

In conclusion, while The Lego Movie universe is substantial enough to warrant significantly more analysis, it is simultaneously and emphatically also a cosmos of children at play. With all the risk and investment required by a $60million project, and all the gravity and careful consideration this necessarily entails, the creative act is still depicted, in its essence, as something childlike, joyous and free. This is the film’s pièce de résistance. It pushes back against the bottom-line-minded lords of business – and even some too-seriously-minded theologians – and reminds us all of the wonder buried in creation: even in an initially unpromising children’s film we can rediscover in new form that guiding spirit of creative vitality born between a father’s generosity and a child’s glee.