Skip to main content
Photo by Tim Wilson at flickr.com 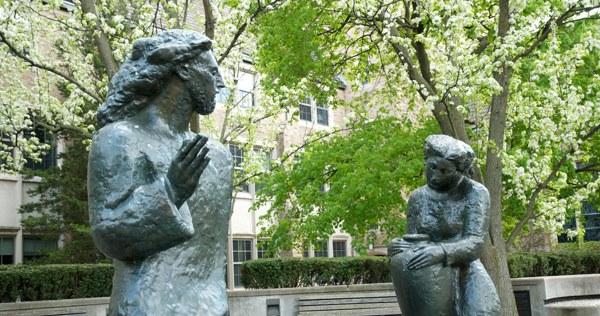 What can we learn from the Samaritan woman at the well, and her encounter with Jesus, about forming the Church of the future? Sarah Young of the Jesuits in Britain’s Spirituality Team thinks that discernment can help us to strike out on new paths.

When Jesus asked the Samaritan woman whom he met by the well to give him something to drink, she was taken aback. What could she offer? What was acceptable for her to offer? Jesus had greater confidence in her than she did in herself: he saw that she could be the one to proclaim the Good News to her community. His trust in her was not disappointed. Indeed, on her return home, her words ‘brought people out of the town and they made their way towards him.’ She was an effective evangelist.[1]

What today will bring people out to find ‘living water’? For most people today, it no longer occurs to them to go to church to satisfy their thirst. This presents a big challenge. In his homily for the first Pentecost Mass that he celebrated as pope, Francis asked: ‘Do we have the courage to strike out along the new paths which God’s newness sets before us, or do we resist, barricaded in transient structures which have lost their capacity for openness to what is new?’[2] A Church of the Holy Spirit must be ready for new paths. This is where discernment comes in.

I work for the Spirituality team for the Jesuits in Britain. As such, discernment lies at the heart of my work and thus my methods remain a work in progress! My task for now is to get to know spiritual guides on their home ground: priests, religious and lay people who have good listening skills and are accompanying people as they discern what God is up to in the ‘concrete realities’ of their lives. We are inviting them to help us to reach a much larger number and greater diversity of people than we currently reach, people who want to grow in their relationship with God, their discernment, and their service of the Church and the world. Along the way, I stumble across others who do this in all sorts of practical ways already. They are in prisons, working with young people, engaged in the arts, caring professions or in business. They are already responding to Francis’ call to be careful listeners[3], enabling others to explore the vulnerable areas of their lives. Listening for and noticing God, who responds with love and mercy, in the heart of their plight. This is a God worth knowing and is worth telling others about, as the Samaritan woman experienced for herself. It is such relationships that I believe have the potential to sustain existing communities of faith and, more crucially, could create new communities that we cannot yet envisage.

One characteristic of Jesus that we would do well to imitate today is his hospitality.[4] This quality is particularly evident in Jesus’s meeting with the Samaritan woman. As someone with no home in which to receive people, his hospitality took a creative form: he hosted them on their home ground. In visiting them, he entered their concrete reality. They were invited to receive him, not him receiving them. There was often an edginess to the encounter, as with the Samaritan woman. Jesus challenged the usual rules of social engagement. He crossed boundaries and encouraged his followers to do the same. He actively removed the obstacles to the growth of the kingdom of God. The psychologist and Anglican priest Joanna Collicutt suggests that, ‘part of having the mind of Christ is to see the kingdom in the behaviour of people around us.’  In visiting people, Collicutt says, Jesus was engaging in ‘subtle strength spotting’. He declares they are worthy of being at the table. They are encouraged to rise to the occasion. God is at work in their lives already. Like the Samaritan woman, they have much to offer a community of faith.

In his interview with Antonio Spadaro, Pope Francis said that ministers of the Church must accompany the people of God,

… like the Good Samaritan who washes, cleans and raises up his neighbour … The structural and organisational reforms are secondary – that is, they come afterward. The first reform must be the attitude. The ministers of the Gospel must be people who can warm the hearts of the people, who walk through the dark night with them … The people of God want pastors, not clergy acting like bureaucrats or government officials … they must also be able to accompany the flock that has a flair for new paths.[5]

While Francis here emphasises the role of the pastors, it is important to note that it is the flock, not the pastors, that Francis prizes as having the flair for new paths.

In the Spiritual Exercises of Ignatius, full discernment is realised through the desire to act, to be in union with God in the building of God’s kingdom. Lives that may seem ‘out of tune’ with aspects of church life may in other ways be deeply ‘in tune’ with God. If we focus on the latter, the ways the Spirit is already at work in people’s lives, who knows who may eventually flourish in the service of the Church and the world? We cannot see into the future. What we do know, however, is that whatever the woman said when she returned to her people and told them about her encounter with Christ, ‘this brought the people out of the town and they made their way towards him.’

Sarah Young is a member of the Spirituality Coordinating Team for the Jesuits in Britain.

[1] This idea draws on the work of Joanna Collicutt, which will be discussed later.

Why a ‘New’ Commandment?

Spiritual and Religious: The Benefits of Being Both
The Meaning of the Sermon on the Mount
Fraternity in faith: a vision of a future peace
A Short History of Lent
Selected Poems 1976 – 2016