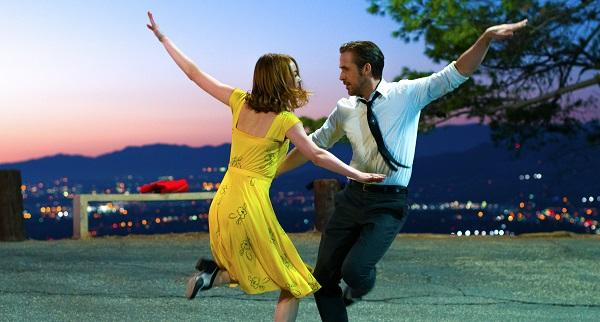 ‘We are too cynical, too realistic-minded. Movies have gotten very literal; even the big special effects movies today are all about verisimilitude.’[i] Damien Chazelle’s take on why musical films of recent years have lost the glamour and romance of old Hollywood explains a lot about the film he has written and directed. La La Land seeks to evoke these qualities, and it nails its bright colours to the mast in an opening sequence that sees hundreds of actors performing a musical number on an LA freeway which has been brought to a standstill. Realistic? Not at all. Impressive – certainly, in its production values, but not as a segue into the rest of the film. It is almost as if Chazelle felt the need to scream from the rooftops at the beginning of the film that ‘This is a musical!’, but the resulting scene is reminiscent of an extended GAP advert rather than an introduction to what follows, which is not a big cast affair but rather almost entirely a two-hander.

Luckily, those two hands are very capable, and what success the film enjoys is entirely thanks to them. Emma Stone is, as always, magnificent. So well does she inhabit the role of aspiring actress Mia that it’s hard to imagine this film working at all with anyone else in the part. She has the ability to break your heart or make you beam with delight in an instant. Ryan Gosling brings his usual lazy energy, if that isn’t an oxymoron, to frustrated pianist Sebastian – he has enough charm to make Mia’s interest in him plausible, but a hint of disinterest which means the success of their romance is never a sure bet. Both are competent enough singers and dancers, but it’s in the less musical scenes that they get a chance to shine and showcase their chemistry in this, their third project together.

Mia and Sebastian’s story is a realistic one at its core – two people being rudely awoken from the throes of romance by the demands of ambition and responsibility, which are, as so often, also in competition with one another. But Chazelle is more interested in shunning the literal than in watching this couple try to figure out the work-life balance. The problem is that for the most part their journey is juxtaposed with, rather than conveyed through, musicality. This, combined with the disjointed opening, makes the film feel unbalanced, and it makes a relatable concept a bit too Hollywood and, well, smug. Perhaps that’s the point – this is La La Land, after all – but Chazelle seems to have been aiming for the magical realism that works so well in, for example, Baz Luhrmann’s films (Moulin Rouge, Romeo + Juliet), and he doesn’t quite get there.

Chazelle’s last film was 2014’s magnificent Whiplash, which he also wrote and directed – it was arguably the best film of that season, although it lost out on a Best Picture Oscar to Birdman (another good example of magical realism on screen). If you didn’t know that, you might find it difficult to discern the same hand behind the two films, but ultimately both are about the natural tempo of life –how we move in time with it, how it varies naturally, and ambition as a force that disrupts it. Ambition is, essentially, us setting our sights on a point further along the score of our life; when we find it frustrating that we have not yet reached that point, we can try to quicken the tempo. Whiplash used jazz drumming as a very literal metaphor for the searing pain that results from ambition pursued at a relentless pace. La La Land is a gentler exploration of what happens when having one eye on the next movement causes us to lose our place on the score and get out of sync with those with whom we are playing. La La Land punctuates its rhythm by signposting for the viewer the changes of season, which, other than the appearance or removal of Christmas decorations, are barely noticeable in the LA climate. This organic progression of time accompanies an equally organic progression in the story; both are interrupted when questions of ‘now’ and ‘later’ become a source of tension. This idea of how we move with and against natural rhythms and forces also seems ripe for exploration in Chazelle’s next project, a biopic of Neil Armstrong.

‘How are you going to be a revolutionary if you’re such a traditionalist?’, Sebastian is asked at one point. Chazelle seems to suggest through this film that you can start a revolution precisely by resorting to tradition – a proposition worth exploring in itself – and he is brave to try. The odds are that La La Land will likely win a few of the fourteen Oscars for which it is nominated (it is nominated in every category for which it is eligible, bar Visual Effects, and Make Up and Hairstyling). But it will not be a travesty if it doesn’t. It has attracted the cynicism that Damien Chazelle has been so keen to counter, not because audiences are desperate for a realism that this film seeks to challenge, but because it doesn’t recognise that it is at its best when it is most real. Reaching for the stars, or at least the Hollywood Hills, seems somewhat superfluous when the view would be just as good at a lower altitude.