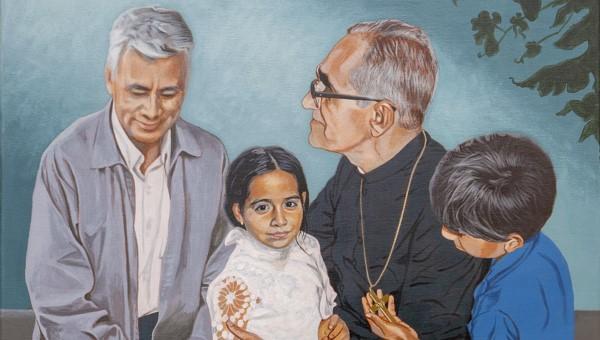 On 22 January 2022, Rutilio Grande SJ will be beatified in El Salvador, alongside Manuel Solórzano, Nelson Rutilio Lemus and Cosme Spessotto OFM. The life and death of the Jesuit martyr issue a challenge to all of those who encounter his story, even 45 years after his death, says Canon Michael Everitt as he exhorts us to extend the ‘table for all’ to which Rutilio welcomed so many people.

On 6 August 2020, the feast of the Transfiguration, whilst driving from the seminary where he was the rector to the parishes of his home diocese, Fr Ricardo Cortez was shot dead.[1] He was 45. The seminary was the St Óscar Arnulfo Romero Seminary in Santiago de Maria, named after the Archbishop of El Salvador who, forty years earlier, had been assassinated. Ricardo Cortez was the third priest to have been killed in the previous eighteen months. At his funeral, his bishop said: ‘The innocent blood of a good priest once again irrigates the land of El Salvador…Once again, our diocese is stained with the innocent blood of a good pastor dedicated to his sheep.’[2]

On 12 March 1977, Ricardo Cortez would literally have been embarking on his first steps at his family home. On that day, a different priest and those travelling with him were also shot dead: that priest was Fr Rutilio Grande of the Society of Jesus; his companions were Manuel Solórzano, his 72-year-old sacristan who had tried to protect Rutilio from the twelve bullets fired at the car, and Nelson Rutilio Lemus, aged sixteen, shot by a single bullet. Three young children who had been given a lift in the car from the nearby town of Aguilares were spared and escaped to another town covered in blood and mud.

Rutilio Grande is seen by many as the proto-martyr of El Salvador. In his Archbishop Óscar Romero Lecture in 2016,[3] Rodolfo Cardenal SJ recounted a meeting with Pope Francis. After asking if there had been any reported miracles connected to Rutilio, the pope confirmed with a smile that there had been a miracle: ‘Rutilio Grande’s great miracle is Archbishop Romero.’[4] In his lecture, given in many places in the UK, including Durham, Cardenal outlined how, in order to understand St Óscar Romero, one must also encounter Rutilio Grande. I would like to expand Pope Francis’ observation of the miraculous to include the election of a South American pope with a mission to identify the Church with the poor as being another miracle that could be ascribed to Rutilio Grande.[5]

Rutilio Grande was born on 5 July 1928[6] in the small hamlet of El Paisnal about twenty miles north of the capital city of El Salvador, San Salvador. El Salvador’s economy at that time was dominated by coffee production (cotton and sugar being the other main crops), and the wealth and land ownership concentrated on a small group referred to as the oligarchy. Rural poverty was a major issue, with dissenting voices from the poor being met with violent oppression.[7] Rutilio was the youngest of six boys in the family and shortly after his birth his parents’ small business and marriage both collapsed. His father left the family to work in Honduras and it is believed his mother died. Whilst his older brothers took up familiar duties, renting a field to grow basic crops, four-year-old Rutilio had schooling to undertake and became very close to his father’s mother. It was with her that he became immersed in the pattern of the Church, both prayer and practicalities, and he also came to see that Christ was there with the people. This meant that for him his image of Jesus was that of a Salvadoran peasant. Rutilio’s phrases and clothing always reflected this insight. Jesus for him was ‘the man from Nazareth’, just as he himself was ‘the man from El Paisnal’. Joseph, the patron saint of the town, was ‘Mr Saint Joseph’. God was not a distant construct, but a local reality. The sacramental life was not confined to a sanctuary, but in an open ‘table for all’ located in the heart of daily life.

The family ensured that the earnest boy studied hard, and he valued the labours of his brothers and the care of his grandmother and eldest brother’s wife to enable this. In his early teens, the local Archbishop Luis Chávez y González encouraged and mentored him. Óscar Romero reflected on this discernment and call in a homily near the first anniversary of Rutilio’s murder. ‘In the same way that David, son of Jesse, was called, so too Rutilio was called to begin to walk that road on which day after day he would be led to become a better man.’[8] The homily, which I could have shared in its entirety, reflected on ‘Rutilio the man, the Christian, the priest’.

Rutilio entered San José de la Montaña Seminary in 1941 and began his journey to become a member of the Society of Jesus in 1945. Seminary life combined with becoming an adult meant that at times his health suffered. He was a scrupulous student which, with the complexities of his family life, caused moments of nervousness and a strong sense of the cross in his life. His studies took this boy from a small central American hamlet to a national educational centre and then as far afield as Ecuador, Spain and Belgium. He was ordained priest in 1959 in northern Spain, over 5,000 miles away from home, with others taking the family’s roles in his ordination. Rutilio was to suffer from what would now be named as ‘imposter syndrome’ until 1962, his experience of vulnerability and disconnected childhood being one shared with many in El Salvador and from similar situations.

1962 was the beginning of the Second Vatican Council. It had been announced the same year as Rutilio’s ordination and ran until 1965 with dramatic consequences for the life of the Catholic Church. There were two newly ordained priests in El Salvador for whom, initially in different ways and then in a unified fashion that led to them both being martyred, the Vatican Council would define their lives and ministry. Óscar Romero and Rutilio Grande shared a similar sociological background and whilst at seminary in El Salvador became friends. This friendship continued despite Rutilio, along with many of the Jesuits in central and South America, embracing the Council’s opening-up of the liturgy and life of the Church and Romero’s hesitancy at so much, as he perceived it, being potentially lost.

Rutilio returned to El Salvador to teach at the seminary. The Latin America Bishops’ Conference in Medellín, Colombia in 1968 grounded the concepts of Vatican II in a way that gave clarity on the need for the Church to live out as a priority the ‘option for the poor,’ and to create ‘base communities’ at the local level. Rutilio ensured that the seminarians were rooted in impoverished communities during their formation rather than remaining within the confines of the seminary, and that the seminarians learnt from lay leaders and not just from clergy. His was a radical view that, in time, tested the friendship between Romero and Rutilio. Rutilio had organised Romero’s episcopal ordination service in 1970; however, when the time came, the now Bishop Romero was among those who did not appoint Rutilio to be rector of the seminary. Rutilio went to lead a mission in the desperately poor, politically isolated community of Aguilares in 1972, during a time of increasing unrest within El Salvador. Here he lived out the dynamics of the Church being the ‘people of God’ and encouraged others into leadership roles because of their faith. Some of them embraced the political movements of the time and Fr Rutilio was seen by the oligarchy to be too politically active.

Rutilio saw all of life in terms of the scriptures and Christ. It was his links with the structures of his community that caused those with power to be uncomfortable. Following the kidnapping and expulsion of a Colombian priest from El Salvador, Rutilio preached that there were too many Cains and Abels in the country: those oppressing and silencing their brothers to keep power, and those being killed by their kinsmen.[9] Living out the words of the Magnificat – ‘he lifted up the humble and meek and the rich he hath sent empty away’ – in a country of violent suppression, is radical in its basic meaning of returning to the root.

Óscar Romero’s name was the one preferred by the oligarchy to become archbishop, to bring these troublesome priests into line. There was great disquiet on his appointment within the rural and poor communities. Rutilio, having reconciled with his friend, tried to encourage those who were unhappy, for he knew that the new archbishop was living out the option for the poor. However, the murder of Rutilio completed this conversion. Rutilio’s mentor, the previous archbishop, was too upset to speak, and so Romero led the local and national Church through the grief over a life taken by oppressors, living out the calling of a bishop as a point of unity.

Rutilio and his companions were not the last martyrs. They were, like the majority of martyrs, from the humblest and marginalised communities.[10] Óscar Romero was to join them three years later. The oppressors, like God, do not see background or status, but a commitment to the way of Christ. They think that by taking the life of people, they can destroy. Christian faith testifies that the opposite is true: the inheritance is shared more abundantly. A vulnerable Salvadoran priest is celebrated throughout the world for living a life for Jesus, for seeking his transfiguration of all society, for extending a table for all God’s children.

Fr Rutilio Grande of the Society of Jesus, in his life and death, and following his death, shows to us that the hope of the gospel, especially for those who are often forgotten by the world, extends to all. To embrace this vision and live it out still carries great risk, as Fr Ricardo Cortez’s death painfully reminds us. They are, for the contemporary Church, figures of hope. Pope Francis’ claim that Óscar Romero is Rutilio’s miracle issues a challenge for us all to be similarly changed through our encounter with this humble priest, who welcomed all to God’s table.

This article is based on an address delivered at Durham Cathedral on 21 February 2021.

[5] http://www.romerotrust.org.uk/martyrs/rutilio-grande-sj ‘On 22 February 2020, Pope Francis declared that Rutilio Grande, along with his two companions Manuel Solórzano and Nelson Lemus, were martyred in hatred of the faith. This leads the way to them being officially recognised as “Blesseds”.’

[7] February 1932 saw La Matanza (massacre) one of the most violent of these oppressions of uprisings.

[10] A point made by Justin Welby on 15 February 2021 at the commemoration of the Libyan Martyrs.