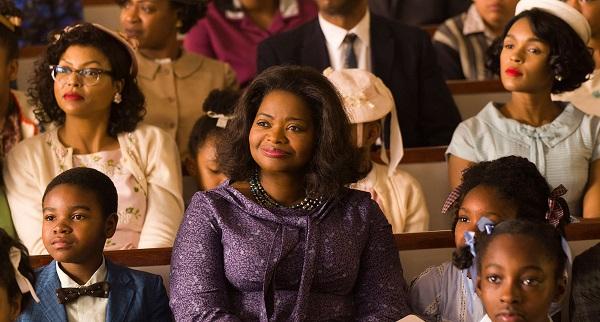 It’s 1961; the United States and the Soviet Union are locked in a deadly combat of fear and suspicion, the main overt expression of which is the ‘Space Race’ in which the USSR consistently outperforms American scientists and engineers, though as we all know, it is an American astronaut who finally succeeds in planting his country’s flag on the moon. At the same time, America is engaged in an internal struggle of a different sort: the Civil Rights Movement, the aim of which is to end the widespread policy of segregation and to grant equal rights to African Americans, who at this time are treated as second-class citizens. With an entire country awaiting news of their progress, the white male engineers, scientists and mathematicians of NASA strive to send a man into space and into orbit around the Earth. Since this is also in the very early days of mechanical computers, all the necessary calculations are performed by a female army of human computers – or rather, two armies: one white and one ‘coloured’.

Hidden Figures tells the story of three of these ‘computers’: Kathy, Dorothy and Mary, three black women with brilliant minds, trying to succeed in an adverse environment; real women who overcame the prejudices of their time to become leading figures at NASA in mathematics, engineering and computer programming. With an amusing script and likeable characters, Hidden Figures is an enjoyable film which saunters along to a satisfying and predictable end, making disappointingly little use of its potential to explore the human condition and the dysfunctions of society.

There is very little emotion in the film, apart from one rather superb moment when a drenched and dispirited Kathy is confronted about where she disappears to for 40 minutes at a time (half a mile away to the only toilets on campus for coloured women), and she finally shames her co-workers with a litany of the racist attitudes and actions which tyrannise her life. But are we to imagine that at home she never once shed tears of frustration because, although she was apparently single-handedly making the calculations to put American astronauts safely into space, she was not even allowed to attach her name to a report? In a time when African Americans across the country were campaigning for their rights as human beings, these extremely intelligent women, apparently possessed of heroically phlegmatic dispositions, take it all in their stride, calmly and confidently working their way to success.

Prejudice and discrimination are portrayed in very obvious ways: the complete segregation of all facilities and in all buildings, overt expressions of disbelief at the capabilities of women, looks of surprise when a black women walks into a room full of white men. But the film fails to portray as well the more subtle, ingrained and subconscious acts of discrimination that make a workplace challenging. Kathy breaks protocol by attending a meeting composed mostly of high-ranking military officials. Unexpectedly finding herself to be the person best able to answer a question, she speaks. And they all listen and accept her answer. No one interrupts or talks over her. No one needs her answer verified by a male counterpart. This scenario would be unlikely in America in 2017; it is surely pure fantasy for 1961.

The men at NASA seem, by and large, to be plodders with no vision. Though they are proclaimed to be the best minds in the country, they are portrayed as being not very capable, with the exception of the head engineer, a Jewish immigrant from Poland with a countercultural understanding of what a black woman can and should be allowed to achieve. On the one hand, this portrayal of NASA’s men, apart from adding to the humour, shows rather effectively the frustration of women even today who work hard and still struggle to find work appropriate to their ability while they watch less capable men climb the corporate ladder with ease. On the other hand, it suggests that these women could only come to the fore in a place where the quality of the work was generally poor, rather than that they shone even among the brightest stars.

The film touches very briefly on the visionary nature of the work undertaken at NASA, which required an ability to see beyond what was known, to reach out into the realm of possibility and make it reality. That this line of thinking is not carried throughout the movie is disappointing on two levels. On a more superficial level, there is no real sense of why all of these people work in such a precarious programme, though they certainly work very hard. But on a more profound level, something more could have been made of this innate human desire to go beyond what we already understand and observe with our senses, which of course is not only the first requirement for scientific discovery but also for a belief in and relationship with God, and which our modern culture attempts to stifle with its emphasis on scientism and hedonism. But set in the turbulent 1960s, it could also have asked the question: why could these people see beyond the status quo to envision a world where space travel was possible, but not a world in which all people were treated equally? Why is it that we can do challenging and even seemingly impossible things, but we cannot see how we should act justly in our own communities and families, and still less how we should change ourselves?