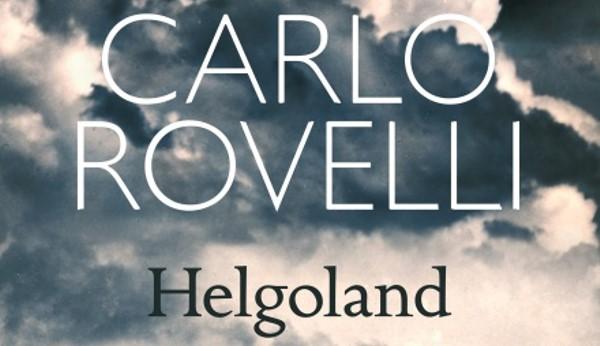 Helgoland (its English name was ‘Heligoland’, which vanished from British shipping forecasts in the 1950s) is a small island in the North Sea off the West German coast. Britain acquired it from Denmark in 1807 and in 1890 rather arrogantly swapped it for the German colonies of Uganda and Zanzibar. In 1947, 3,997 tonnes of dynamite were blown up on the island by the Royal Navy.

Well, physicist Carlo Rovelli’s very good translators render Helgoland as ‘Sacred Island’, though I prefer ‘Holy Island’ as more adept for pilgrimage to known and unknown places. In 1925, the young Werner Heisenberg went alone to Helgoland, keeping his pollen allergy at bay while he worked at a problem suggested by Niels Bohr. Electrons orbit the nucleus of an atom but hop from one orbit to another. Why? What is going on – what force causes the hop, or jump, or leap? The theory that reality was made up of matter moving along defined paths in space seemed as exploded as the dynamite the Navy blew up. Classic physics stuttered; quantum theory began.

Against convention, Heisenberg decided to pay no attention to an imaginary ‘force’ that caused the orbits to change but to focus on what is observable – the light emitted by the electrons when they hopped. Heisenberg does good calculations with matrices (I vaguely remember in my early youth wondering what a matrix was for…) which worked out well. And the story continues off the island. Electrons might be a wave, not a hopping particle – along this line followed Louis de Broglie and Erwin Schrödinger, whose waves get the same results as Heisenberg. Max Planck gets in on the act with his famous constant connecting energy and frequency. For Max Born, what is calculated is the probability of observing the electrons. Albert Einstein suggests the waves are made up of granules. Meanwhile there are imaginative imponderables: ‘quantum superposition’ (where electrons seem to be simultaneously here and elsewhere), which is not itself observable, though its consequences – ‘quantum interference’ – are evident. There is also ‘quantum entanglement’: the properties of interacting objects exist only in relation to a third – the observer. The language is precise though not pellucid.

Early on Rovelli remarks: ‘Is that clear? It is not. It’s about as clear as tar.’ (p.15) Luckily Rovelli’s prose is not like tar. And indeed the constituents of quantum theory do emerge: observation, probability and granularity. To this Rovelli has added a relational interpretation: quantum theory describes ‘the way in which one part of nature manifests itself to any other single part of nature’ (p. 67). And all of us – scientists, theologians and everyone else (the majority!) – are included in ‘nature’. Interactions are crucial, for apart from them there is nothing. So we need to include ourselves. To use a phrase from a related context, ‘we are nature looking at nature’[i], or in theological terms (about which Rovelli would be wary) we are creation looking at creation. We are not isolated individuals looking down at the universe from an outside grandstand.

In all this there is an astonishing ability to think afresh with a new or renewed imagination, and to use untested approaches: Heisenberg on Helgoland. But this is not a solitary affair. Many people were needed to pick up the track. Quantum theory wasn’t put together by one person; imaginations work in cooperation. Rovelli lists some eight Nobel Prize winners between 1921 and 1954, often people who bickered and argued creatively among themselves. Inevitably there are disputes and dubious as well as delightful people, but the arguments are inevitable and part of development, a re-configuring of what is known. Science, to use Pope Francis’ word about Church, is ‘synodal’, as well as experimental and full of theories.

Rovelli’s account includes his own experience. As a student choosing courses, he found physics attractive because it promised an entry into the depths of reality. He sees inexplicable experiments. He notes the oddities of physicists and the presence of wider conflicts – Stalin’s extremely ill-tempered writing against Bogdanov and Ernst Mach’s physics: their writing, Stalin says, is ‘bourgeois’, a formula as dismissive as an anathema sit. Stalin seemed to have had a compulsive need for certainty, comprehensiveness and control. This approach is inimical to physics – and, I would think, also to good church governance…

Our activities and relationships go with us, they shape our lives and need to be included in what it is to believe or not to believe. Of course, Rovelli – as usual – wants to see how the very, very small scale of quantum theory extends into areas we are more ordinarily aware of at our own larger scale. This means perception and consciousness (so far he has not included language), as well as what somehow seems peaceful and ultimate. As might be expected, Rovelli wants quantum theory ‘to be discussed beyond the restricted circles of theoretical physicists and philosophers’ (p.165).

Wonder and amazement persist. Rovelli’s friend Časlav Bruckner, contemplating the weaving of quantum physics, asks: ‘It’s really incredible … Can we believe this?’ (pp. 1, 167).[ii] Well, yes – for the time being.  Rovelli’s writing conveys a delighted sense of ‘mystery’ – literally the last word in the book. And of course Christian belief (Rovelli is a clear and ‘serene atheist’) needs to enjoy the grasp of mystery. Revelation and doctrine may allow us to ‘name’ God and to use truthful analogical language (perhaps the theological equivalent of quantum superposition). Nonetheless, God also and at the same time remains mystery and – I write this on Trinity Sunday – is very deeply relational.

Brian B McClorry SJ is a member of the Corpus Christi Jesuit Community, Boscombe.

[i] See Max Oelschlaeger, The Idea of Wilderness. From Prehistory to the Age of Ecology (Yale University Press, 1991).

[ii]  Thomas Kuhn, The Structure of Scientific Revolutions (University of Chicago Press, 1962), dealt with ‘paradigm shifts’ – a model picked up by Mark S. Massa in The Structure of Theological Revolutions: How the Fight Over Birth Control Transformed American Catholicism (Oxford University Press, 2018). What matters is not only the ‘development’ of doctrine, but changes in religious culture and ways of thinking.