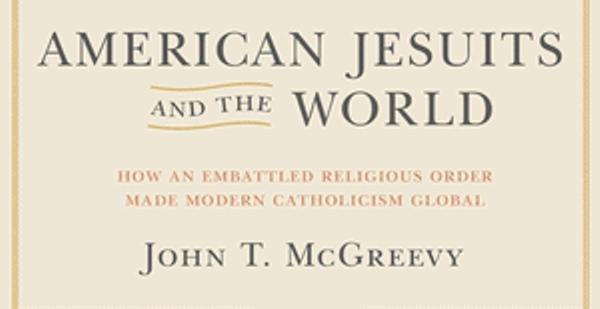 Dr John McGreevy, Professor of History at the University of Notre Dame, continues his ground-breaking studies on the Catholic Church in America with this thoroughly researched and engagingly written look at the role of European Jesuits in nineteenth century America and the subsequent role of American Jesuits in the wider world.

Beginning with an examination of deeply held prejudices against the Society of Jesus, Dr McGreevy moves in the middle chapters of the book to four case histories that exemplify the culture clash between these European exotics and Native American values. These ‘forgotten Jesuit tales’ are full of incident and colourful detail, and one can only admire the heroism and stamina of these missionaries. However, in some respects, this section of the book demonstrates to what an extent anti-Jesuit prejudice was justified.

In our post-Vatican II world, it is easy to forget how reactionary the Catholic Church has been in modern history. The Jesuits who are the subject of this book were largely driven from European countries (Belgium, Switzerland, Germany, Italy, Portugal and France) in consequence of the revolutionary and anti-clerical movements which began in the late eighteenth century and continued into the early twentieth century.

Having been suppressed in 1773 and restored in 1814, the Society of Jesus entered the fray fully aligned with the powers of reaction: pro-papal, pro-monarchist, anti-liberal and anti-democratic. Ironically, it was the experience of living in a democratic and tolerant America that led to a transformation of thinking among such outstanding priests as Fr John Bapst (first President of Boston College) and Fr Burchard Villager (founder of St Joseph’s Church and College in Philadelphia).

Ministering primarily to immigrant communities, Catholic clergy in the United States throughout the nineteenth and early twentieth centuries inevitably contributed to a ‘Europeanised’ Catholic subculture. Its legacy is still visible in the ecclesiastical and academic institutions that date to that time. Forced to maintain political neutrality even during such a crisis as the American Civil War, Jesuits along with other Catholic clergy later became more openly involved in civic life and in the republican values that surrounded them, so that by the time of the First World War the Americanisation of the Catholic Church was becoming a reality. As an alumnus of St Joseph’s said, he and his co-religionists must come to the support of President Wilson as ‘makers of a democratic world.’

A major battleground in this conflict of European versus American values was education. Dr McGreevy goes into great detail in describing how a simple matter like the use of the King James Bible in American public schools would lead to the inevitability of a separate Catholic schools system. Unsupported by public funds, American Catholic schools and colleges ultimately became the world’s largest private school system. By 1900, there were 25 Jesuit colleges (most with an associated high school) in the United States. This was a major contributory factor to the creation of patriotic and civic-minded American Catholics who were no longer content to be a subculture.

It was only after the Spanish-American War of 1898 that the United States began exporting Jesuits rather than importing them, and the islands of the Philippines proved to be an interesting laboratory for the experimental fusion of progressive American ideas, old-world Spanish traditions and an indigenous population approaching the threshold of national independence. It took a generation, but by the 1930s the Americanisation of the Jesuit mission in the Philippines was complete, assisted by such incomprehensible imports as baseball and boxing. The emergence of the ‘Ateneo’ at Manila as a powerhouse of progressive, pragmatic Catholic education brought great prestige to the country.

The great John Courtney Murray SJ taught at the Ateneo in the late 1920s and lived to see the seeds of this progressive Catholicism come to fruition at the Second Vatican Council. It is one of the benefits of American influence that the Catholic Church after the Second World War was no longer exclusively Eurocentric but was once again realising itself as global and universal. Dr McGreevy ends with a paean to Pope Francis who was ‘called from the ends of the earth’ to govern this worldwide communion.

Personally speaking, I most enjoyed revisiting the world of anti-Jesuit propaganda which flourished in the lurid fiction of the nineteenth century (for example, Eugène Sue’s popular novel, Le Juif Errant) and continues to do so on some of the more extreme websites which link Jesuits with conspiracies and global plots. The European background may seem remote, but the effects of the Syllabus of Errors (1864) and the declaration of papal infallibility (1870), and even the suppression of modernism (1900s) were significant obstacles to those of a reforming and liberal tendency. To ordinary Americans, these claims to absolute authority were incomprehensible. I was really interested to see how the Jesuits who are the subject of De McGreevy’s case studies were affected by this conflict of values.

I did find that the histories which originated in Maine, Missouri, Louisiana and Pennsylvania were described in such detail that they might have been of greater interest had I been familiar with those places. Readers who have an association with the Jesuit institutions and works which have evolved from those early missions will, I am sure, find much that is fascinating.

The reviewer, William Pearsall SJ, is a member of the Manchester Universities’ Catholic Chaplaincy Team.

The Health of a Nation

Revolutionary: Who was Jesus? Why does he still matter?

Glimpses of the Gospels

St Henry Morse SJ: ‘A saviour of life unto life’
Alfred Delp: committed to Christ
‘The Fight Between Carnival and Lent’
Ignatius and the Stars
‘Give them something to eat’: The Christian approach to food aid