Skip to main content
Photo by sarowen at flickr.com 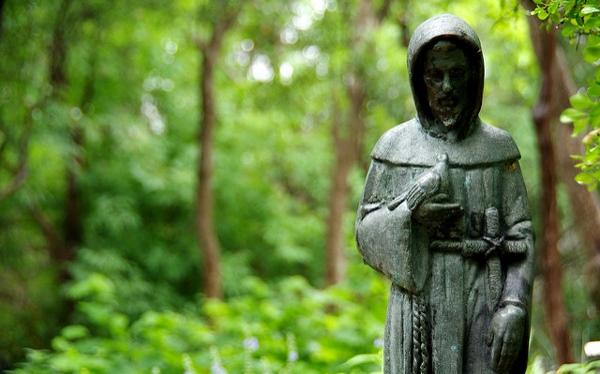 ‘I had mercy upon them’: we read these words in the opening lines of the Testament of St Francis of Assisi, whose feast is celebrated on 4 October. In this Jubilee Year of Mercy, Brian Purfield offers the saint by whom Pope Francis has been so inspired as a model of mercy. What does St Francis’ account of his own life tell us about his spirituality?

If someone were to ask you to tell your life story, where would you start? Francis of Assisi faced just that decision as he lay dying in September 1226 and looked back over his life. In the opening lines of his Testament he wrote:

The Lord granted me, Brother Francis, to begin to do penance in this way: While I was in sin, it seemed very bitter to me to see lepers. And the Lord Himself led me among them and I had mercy upon them. And when I left them that which seemed bitter to me was changed into sweetness of soul and body; and afterward I lingered a little and left the world.[i]

What is so striking about Francis’ words is where he begins his story. Thomas of Celano, his first biographer, talks about Francis undertaking long periods of prayer. Other early biographers describe his disillusionment with the business and military worlds. But in Francis’ own account, his conversion did not occur according to any well-rehearsed plan or in any specific place. Given who he was on his deathbed, he understood that his story began with an encounter with a human being, one who was looked upon with horror and disgust: the leper. Lepers were excluded from society and were abhorred by people. By starting his story at this point, Francis gives us a key to his spiritual outlook: if you are looking to discover God, look for the leper in your life, the person who is most troubling to you.

Francis tells us what he did in that encounter with the leper: he acted with misericordia – mercy or, more accurately translated, with a heart sensitive to misery. James Keenan[ii] defines mercy as the willingness to enter into the chaos of others to answer them in their need. This is exactly what Francis did: he entered into the chaos of the lepers’ lives. Not only are their lives changed, but Francis’ life takes on a new direction. He is converted from fear of them to love of them. A new story begins.

Showing mercy is at the heart of that story: it is not limited to one encounter; it defines a way of being which is essential to Francis’ understanding of the spiritual life. Very quickly, however, the mercy that Francis was so eager to show taught him that he needed to experience his own misery before being able to reach out to someone else in theirs. Compassion for the poor and the marginalised turned into identification with them.

Moreover, he wanted all of those who joined him as brothers to identify with those in need: before anything else, they must serve the lepers.[iii] He wanted those called to exercise authority in the fraternity to be ‘ministers & servants.’[iv] His Letter to a Minister[v] was written to a brother who was called to such responsibility but seems to have found the burden a demanding one – he wished to be relieved of it and become a hermit. Francis reminds the minister of the reason for Jesus’s coming among us: to reveal the mercy of God. The one causing the minister such pain seems to be a brother who has not simply fallen once or twice or who has committed a grave sin, but someone whose habitual state seems to be that of sin. This brother might be touched by the grace of conversion and be looking for mercy; but he might also be so hardened that he is not. Whatever the case, Francis’ advice to the minister is the same: ‘do not allow such a person to leave your presence without your mercy.’[vi]

Not only does Francis encourage the minister to love those brothers who make life difficult, he adds: ‘Do not wish that they be better Christians.’[vii] We are not to judge or see ourselves as better than others, but always keep in mind that, out of love for us, the Son of God entered our history and endured suffering and death. The misery and abuse we may have to endure in the fulfilment of our responsibilities offer opportunities for identifying with the Suffering Servant and are expressions of the humanity we share with all who have been redeemed by Christ’s blood. In this light, who could deny that such indignities are ‘more than a hermitage’?[viii]

This theology came out of Francis’ deep love of Christ. Not the Christ of many of the late medieval paintings – the Pantocrator, the judge at the last judgement – but the Christ of Bethlehem who became one of us because He loved us; the Christ of the Last Supper who gave Himself as food for a spiritually starving humanity, and the Christ of Calvary, who died as a sacrifice so that we would be raised up from our own humanity. Overwhelmed at discovering such a brother, Francis’ response was: ‘Hold back nothing of yourselves for yourselves, that He Who gives Himself totally to you may receive you totally!’[ix] Francis’ conversion was a rejection of his former life in order to give himself totally to God, and he wanted all those in his order to do the same.

Francis entered deeply into the Passion of Christ, who died stripped of everything and abandoned by all but his closest followers. He received the stigmata on La Verna in September 1224. Following this mystical experience, he wrote The Praises of God, ‘giving thanks to God for the kindness bestowed on him’, in the words of his companion, Brother Leo. This loving kindness of God elicits from Francis a response of trust and confidence in the final praise of God whom he calls ‘merciful Saviour’. Jesus, the merciful Saviour, took on our fragility in order to reveal the depths of the Father’s love for us. Francis, in response, cries out, ‘Let us begin, brothers, to serve the Lord God, for up until now we have done little or nothing.’[x] This is not a cry of despair or a pessimistic assessment of his life. Francis’ eagerness to begin again is so that he might not miss one opportunity to experience the many expressions of God’s loving mercy in his life.

Just as mercy was a priority of Francis of Assisi, it has been so for the first pope to take his name, in this Extraordinary Jubilee Year of Mercy in particular and in his pontificate in general, as is evidenced in his prayer on Easter Sunday 2013:

Let us be renewed by God’s mercy, let us be loved by Jesus, let us enable the power of his love to transform our lives too; and let us become agents of this mercy, channels through which God can water the earth, protect all creation and make justice and peace flourish.

As this Jubilee Year draws to a close, let us follow the example of Francis of Assisi and begin again to recognise the many ways in which we have experienced God’s mercy, and to be ever attentive to the occasions in which we are called to show mercy.