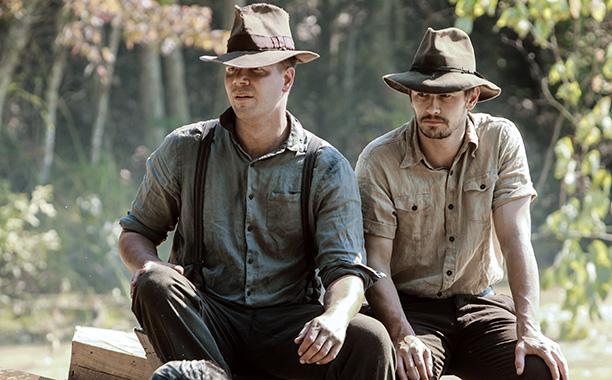 
William Faulkner’s As I Lay Dying is one of the contenders for the title of ‘The Great American Novel’ and it is certainly one of the most ambitious novels of its age. The story, told from multiple viewpoints, is a poignant tale of poverty and struggle, death and decay in the Deep South. Many Faulkner aficionados would consider the challenge of telling the story of the novel on film to be insurmountable. Whilst this might be the case to some extent, James Franco’s directorial debut is haunting and, ultimately, a moving picture of a family in crisis.

The film, set in Mississippi, opens with the death of Addie Bundren (Beth Grant), the mother of the family. As she lies on her deathbed, her toothless husband, Anse (Tim Blake Nelson), sits outside on the porch. He watches as Cash (Jim Parrack), their stoic son, builds a coffin, and youngest son, Vardaman (Brady Parmenter), struggles with a large fish he has caught and brought back home. As Addie is dying, her other sons, Darl (James Franco) and Jewel (Logan Marshall Green), leave the farm to go to work, but the voice of the mother is ever-present as we hear her inner monologue; stories of her past and poetic musings on her impending death. Following her death, the Bundrens make the journey, with her coffin, to Jefferson where she wishes to be buried.

The film, like the novel, seeks to tell the story using different voices and points of view, and there is not really a central character, although Darl dominates. Franco uses multiple camera angles to show a single event and he also employs the use of a split screen so that the audience can see two events happening simultaneously. This adds greater poignancy to certain scenes; for example, Darl’s insistence to Jewel that their mother is going to die is given greater weight when we see her death occurring at the same time. It is as if the audience is all-seeing. However, in terms of replicating or doing justice to Faulkner’s unique literary style, Franco falls short. He is limited by the medium he has chosen, as he has to allow for the brevity that cinema requires. Whereas a novel has twenty or so hours of your concentration and attention, a film only gets about two.

However, there are some great performances. Bradley Parmenter as Vardaman is brilliant and his childlike view of the harsh realities of death is rendered perfectly. Ahna O’ Reilly’s performance as the Bundrens’ doomed daughter, Dewey Dell, is understated; her sadness at her mother’s death and her distress over her planned abortion never spill into melodrama. There are moments, too, of comedy: Anse Bundren, the gummy father, arrives in Jefferson and buries his wife; he then goes and buys himself a new set of teeth. When he smiles and reveals them to his sons we see how ridiculous he is as a character. The real reason he wanted to make it to Jefferson (it now seems) was not to honour the grave of his dead wife but to find a new pair of teeth.

James Franco has created something beautiful. The Deep South – the place where the ‘dark current runs… silent and permanent’ – is shot beautifully, and the struggle and poverty of the family is believable; the audience feels the suffering of the characters. However, I think Franco has been somewhat ambitious in taking a narrative that unfolds slowly and trying to convey this in a medium to which the story is not necessarily suited. Even so, As I Lay Dying is a moving, funny and interesting foray into Faulkner’s unique novel.

The Most Holy Name of Jesus

Our freedom and God’s praise and glory