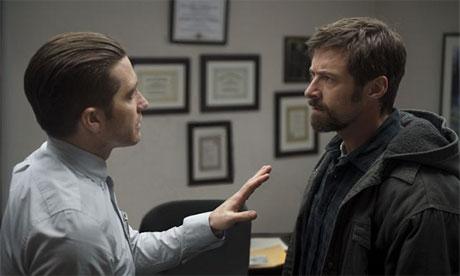 My expectations of Prisoners were low: the trailer highlighted the vengeful father theme, similar to that of Taken, and seemed to rely too much upon the film’s big name stars such as Jake Gyllenhaal and Hugh Jackman. I expected it to be a one-dimensional, box office-driven movie, and in many ways it was, but as the movie progressed there was more depth and complexity than I had predicted.

Hugh Jackman plays Keller Dover, loyal husband and father of two with a strong sense of fatherly authority and protection. The Dovers are a Christian family: they pray the Our Father and have a Jesus fish on the back of their pick-up truck. His daughter, Anna (Erin Gerasimovich) and her friend, Joy (Kyla Drew Simmons) are kidnapped on Thanksgiving Day. Passionate but lonely Detective Loki (Gyllenhaal) is put on the case. The only suspect is creepy and quiet Alex Jones (Paul Dano) who was seen in his trailer outside the Dovers’ home. As Loki investigates, he finds no reason to hold Jones in custody and is forced to release him. Dover, frustrated by what he imagines to be Loki’s incompetence, loudly confronts the detective, demanding that he do his job and hold onto Jones. When Jones is released, Dover begins to work outside of the law to find the girls. He finds Jones, kidnaps him, and then implores Joy’s father, Franklin Birch (Terrence Howard), to help him torture Jones until he reveals the girls’ location.

Much of the film is overly dramatic and obviously expositional. The idea that the girls may have been taken by the man in the trailer is suggested by Dover’s teenage son, Ralph (Dylan Minnette), far too quickly for it to be believable. When Loki and Dover first interact, their dialogue is so clichéd that the talented actors have a hard time redeeming it. Jackman attempts to bring a level of paternal concern into the dialogue, which would otherwise be an angry rant, but Gyllenhaal embraced the poor writing, thereby offering a clearer, albeit basic, portrayal of the character.

I had expected this kind of simplicity from Prisoners, but I was pleased to discover that the plot and the characters developed in an interesting way. I expected Dover to be the hero, finding the kidnapper and the girls through his own effort and reconciling his differences with Loki. But it was not that simple at all. Clues and potential suspects in the kidnapping case were numerous, and I felt great suspense during several moments, even to the point of gripping my seat. For example, if a major character is rushed to the hospital in a more unoriginal movie than this, the viewer knows s/he will not die, but when this happened in Prisoners, I had no idea what the outcome would be. There had been enough curveballs by that point that I felt as if nearly anything could happen.

I was partially disappointed by the portrayal of fatherhood in the film. Dover’s desire to find the girls is rooted in his love and protection for his daughter, but he takes that powerful emotion and allows it to be twisted so much that at one point I said to myself, ‘This man is not a father’. His treatment of Alex Jones is brutal, and is carried out while his wife and son are at home, wondering where he is.

When Dover convinces Birch to help him in his treatment of Jones, he says to Joy’s shocked father, ‘He’s not a person anymore. He stopped being a person when he took our daughters.’ This kind of statement screams of an abandonment of Dover’s Christian roots, which were firmly established from the beginning of the film. He had become a prisoner of his own emotions. At least Birch’s initial hesitancy to torture Jones did something to counter the twisted picture of fatherhood that was being painted by Dover’s behaviour.

It is understandable that Dover took the violent route in his search for his daughter, but it was not the Christian route, and I began to wonder when the Christian theme would be reintroduced. After days of torturing Jones without any clue as to the location of the girls, Dover falls to his knees and quietly prays the Our Father. He struggles with the words ‘...as we forgive those.’ It is then that Jones offers a hint to Dover and there is finally some hope of finding the girls. Although the film never offered any definitive judgment on Dover’s actions, it is this moment which helped redeem the fatherly theme.

On one level, Prisoners feeds the box-office hunger for an over-dramatised film about a vengeful father; but, beneath the surface lies a surprisingly good and complex narrative which raises questions about the actions of the main character and reminds the audience of the fragility of each human person.