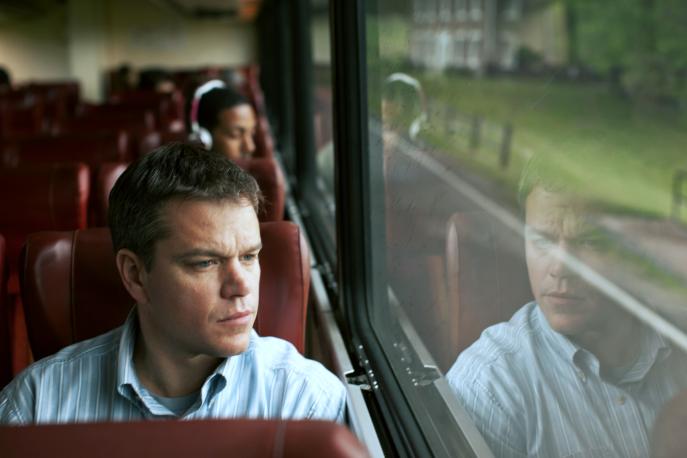 Two representatives of a natural gas extraction company arrive in a small town in the United States, looking to lease more land for gas drilling. They pride themselves on their ability to close deals quickly and cheaply, even though this means they neglect to advise the landowners of the potential environmental and health risks of the operations. Interference from a well-educated local forces them to stay in town, getting to know the community better. And then trouble arrives in the form of an environmental activist intent on spreading the news about the hazards of natural gas extraction.

Promised Land has been described as a film about natural gas drilling – ‘fracking’ – but in fact it is more about big business. The huge, money-making monster goes around taking advantage of people’s poverty and ignorance to make even more money for itself, and if anyone tries to stand in its way, its money becomes a powerful tool to crush opposition. But it is not quite as clear cut as that, because we are encouraged to take the side of the very likeable gas representatives against the environmental activist, who is deliberately the most irritating character in the film.

In focusing on the characters of the two gas employees, the film raises an important question: how responsible are we for the consequences of the work that we do? It is easy to condemn faceless CEOs but much harder to judge people further down the ladder, people like us. Is it acceptable to hide behind the person in charge or to say, as one of the representatives does, ‘It’s just a job’? However, this question of personal accountability could have been explored more powerfully had the film been more forthcoming about the nature of fracking.

Promised Land, while enjoyable, is not very informative; it touches on the environmental implications of fracking very superficially, but in the end, you are left with little knowledge of anything other than the story at hand. It treats fracking as though the dangers are as commonly known as those of cigarette-smoking, for example. You could argue that these issues are not important to the story, but I believe that to present a high-impact yet little understood practice in such an uninformative and confusing way is irresponsible. In any case, social responsibility aside, the film just makes more sense if you are aware of the issues surrounding the industry. If you are as ignorant as I was about fracking, I highly recommend watching Promised Land in conjunction with Gasland, a documentary by Josh Fox. The latter is a story of environmental apocalypse, coupled with industrial and political conniving, that will keep you awake at night.

It is hard to see which side of the debate about fracking the film is on. There seems to be an assumption throughout that people will not change their lifestyles, that they will continue to do what is bad for themselves and for the earth, so somebody may as well make some money out of it. This implicit justification of the selfish pursuit of desires is disheartening, but it is an acknowledgement that the industry has destructive effects.

However, the film presents two arguments in favour of gas drilling. The first is the idea that natural gas is cleaner than petroleum and does not rely on foreign resources. The second, more prominent argument is that American rural communities cannot survive without the industries which put money into them, and natural gas is the future. Of course, if drilling affects the land, as it most certainly will, then the communities will disappear anyway. The industry counts on people’s greed overcoming their better judgement.

Promised Land does not come down firmly on one side or the other, and that is what I find so unsatisfactory, even careless, about it. Perhaps it is trying to demonstrate the complicated nature of fracking, but with scant attention paid to the environmental and health issues, it comes across as flimsy. The film is entertaining, and the characters are relatively interesting and well-acted, but there is a weakness in the overall message that just makes the film a bit bland.

Is water the new oil?

Fruit of the earth

The Age of Stupid