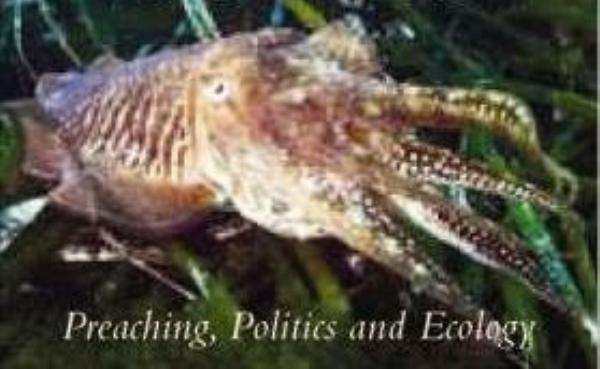 In the Introduction to this book, Michael Northcott writes: ‘Karl Barth famously said that a preacher should always hold together two texts when she preaches – the Word of God, and the words of the daily newspaper.’ Throughout this book, Northcott does just that.

This is a collection of sermons delivered in the first decade of the 21st Century at the Episcopal Church of St James, by Northcott – an Anglican priest who is also Professor of Ethics at the University of Edinburgh. In each sermon he demonstrates both his rigorous knowledge of contemporary environmental and scientific issues and his profound understanding of Christian theology.

‘The preacher in the modern world…stands in place of the exilic prophet, seeking the welfare of the city in which the people find themselves resident but alien.’ As Christianity urges a way of life that is counter-cultural to the wave of consumerism, exploitation and self-seeking that dominates the modern ethos, that voice is urgently required.

A growing angst about the state of the environment is prompting people everywhere to question our relationship with the earth we live on and depend upon. A disturbing number of natural crises over the last two decades such as floods, droughts, melting glaciers and acidification of the oceans, have created an atmosphere of concern and trepidation.

Northcott challenges head on the view that the treatment of our planet is not an issue for Christians. Many argue that the solutions to the ills we are experiencing are the preserve of science to find new technologies, politics to instigate legislation and citizens to act responsibly. But Northcott starts each chapter with a biblical quote, which then informs his sermon and points to the relevance of the Christian message to a current situation. Foot and Mouth disease, sustainable food, the credit crunch, urban congestion, climate change and so on, are all examined in a holistic way that addresses the underlying sin that causes these problems and finds wisdom in the scriptures to shed light on the way forward.

One of the problems with addressing ecological problems is a fear that we are going to be ‘preached at’, made to feel guilty and burdened beyond our endurance. One person alone cannot reverse the trend of climate change or stop the bleaching of corals. How can one citizen in a world of 6 billion and rising, tackle the ecological sins of industrial might so huge it defies imagination? This book points the finger firmly at the global industrial powers but encourages and emphasises the importance of individual right action, affirming that the answers to concerns about our local behaviour lie in the Bible and the wisdom of the saints.

For example, in his chapter, ‘The Politics of Gentleness’, Northcott discusses the unique aspects of Christian involvement in the ecological movement. He addresses the problem of traffic congestion in Edinburgh and the overriding assumption that drivers have priority over pedestrians (this could equally apply to Bristol, where I live, and all other cities I suspect!). He confronts the idea that those who drive vehicles are having their ‘freedom’ challenged by making roads more pedestrian friendly. By citing Ezekiel 34:16, he argues that respect must be given to the weak and constraints placed on the powerful so that a new equality can be achieved. This places pedestrians and cyclists in a new role: ‘...for the roads to be safe places for people who are not surrounded by metal boxes and air bags, those who are in the boxes need to be constrained from destroying the freedoms of the rest to move around or even stand still.’

Freedom in our secular society seems to mean freedom of the powerful to dominate the weak, but a Christian understanding of the word freedom ‘puts the disabled pedestrian ahead of the car driver and invites the fastest driver to share space on an equal footing with the slowest pedestrian.’ He asserts that the politics of gentleness should govern our rules, not those of punishment or coercion, which are employed in things such as speed cameras. He also believes in appealing to people’s higher natures and thinks that the more powerful will consider the weak if invited and enabled rather than forced.

Throughout this book, Northcott espouses the Christian view that love, peace, sharing, compassion and responsibility should govern the way the world works, and that these have to be extended to our treatment of the whole of creation if the human species is to survive. By quoting Isaiah 55:12 he reminds us that the earth will rejoice when released from the savage tyranny of human exploitation. As the cities are laid to waste, the wilderness blooms and the poor find justice. It is a harsh vision but as the environmental crises continue to gather apace we need to rediscover the wise words of the prophets and of Christ himself. This book is timely, pulls no punches and gives a profound insight into our ecological woes and the Christian way forward.

The reviewer, Mary Colwell of Curlew Media, is a producer and writer.

After Humanity: A Guide to C.S. Lewis’s The Abolition of Man