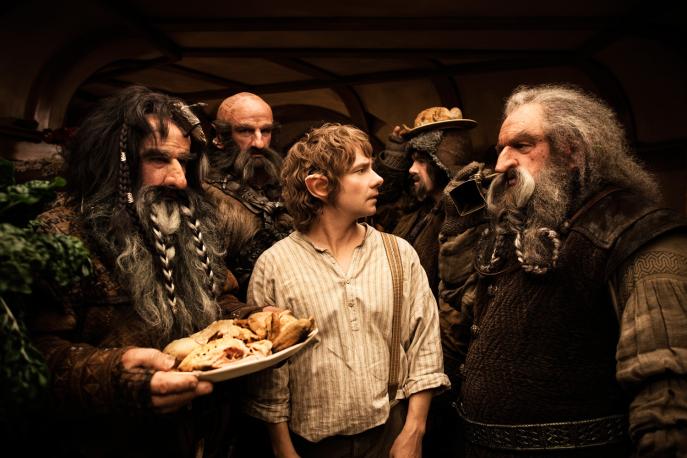 
At around the half way mark of The Hobbit, there is a council of war attended by Gandalf the Grey Wizard, Saruman the White, and the elvish aristocrats, Elrond and Galadriel. In it, Gandalf plays the role of prophet, reiterating the anxious visions and soothsaying of Radagast the Brown (a wizard so at one with nature that he has lichen growing in his beard): the greenwood is sick, there is a dark magic at work. The apocalyptic ravings of the marginalised Radagast are met with resistance, and his prophecy is easily dismissed by Saruman as simply the ravings of the mad.

It is tempting to see some of the details in this film as an environmentalist allegory for where we are now: there are some marginalised and excluded people who are screaming about the future, raving with frustration that others cannot see what is happening, persistently calling for different ways of living, in which life is valued over the pursuit of material goods and advancement. Some of these people are Christians, who have a long record of screaming about the end of things and these being the last days. This environmentalist concern is there also in the way Gandalf is shown to use magic: it is limited, but elemental, a magic represented repeatedly as a connection with the forces of nature and the greenwood, one that uses the power of the life outside our life.

Apparently, Tolkien rejected the repeated attempts of his critics and readers to apply specific allegorical interpretations to his work – in this his writing differs from that of his friend C S Lewis, whose Narnia sequence was written explicitly to mirror ideas in Christian theology. However, this film of The Hobbit is not the text itself, but an interpretation of it, and I suspect that the abiding appeal of the fantasy genre is that it provides ’ even for grown ups – a symbolic language for our conscious and unconscious phantasies to play in. This story is rich enough to be ‘about’ all sorts of things, and the suggestion that this film resonates with anxieties about environmental apocalypse probably has more to do with my own concerns, and maybe those of Peter Jackson and his screenwriters, than those of Tolkien. Other viewers will connect rather with Bilbo’s story of a quiet, unadventurous hobbit finding himself in a quest that is about a search for more than literal gold. Others will recognise in the dwarves – robbed of their homeland and forced into exile – a story about themselves, their people or their family.

Most going to see this film are likely to have enjoyed the vast and epic The Lord of the Rings trilogy, and in writing this review I am treading carefully, conscious of the number of readers who will be the sorts of fans who remember all the details – right down to the names of all the swords, and how to spell them. If you did love the recreation of Middle Earth that Jackson and his colleagues produced for The Lord of the Rings trilogy you will recognise it all in this ‘prequel’, even to the extent that the score uses the same leitmotifs (soupy clarinet solos for the Shire, drifty flutes for Rivendale etc, etc) and there are the same scary orcs and the same principals playing the major roles.

There is an issue about the length of this film: at 169 minutes, this is a long interpretation of a shortish novel. I have to say that apart from the very opening stages, however, I did not find it slow, and didn’t notice the time pass until the credits rolled. Only then did I realise that this version of Tolkien’s novel for children is going to be in three installments. Since the Harry Potter franchise (if not before, I’m relying on my memory here) the processes of the market have have generated an expectation that certain sorts of fantasy film will be very long, and the decision to tell the story of The Hobbit in three lengthy installments suggests an attempt to lift it into the realms of the epic, a space justifiably occupied by its stablemates. I suspect some people will wonder if this is the right way to handle The Hobbit, which is a different sort of story to Tolkien’s later trilogy. Cynics will ask if it’s actually all about money.

I did find the very opening scenes slow, with some rather stagey renditions of Tolkien’s dialogue, and possibly this is a consequence of the decision to retell the novel in three long films. However, this initial lack of pace is more than compensated for by a ripping yarn, some glorious fight sequences, drama, tension and pathos. Tolkien purists might quibble about some of the details of the screenplay which have tweaked elements to raise the emotional quality of the drama, but I don’t think these will be major issues even for them. Oh, and watch out for Barry Humphries (AKA Dame Edna Everage) as the Goblin King.

The Hobbit: The Battle of the Five Armies