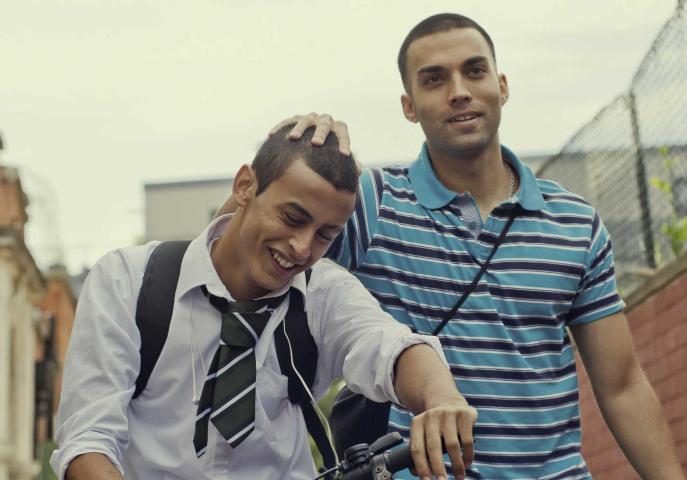 
Welsh-Egyptian director Sally El Hosaini deserved to win the prestigious Best British Newcomer award at this year’s London Film Festival with her debut film set in Hackney. It is an extraordinary and powerful film portraying the lives of two Anglo-Egyptian brothers struggling to maintain their social identity and masculinity whilst at the same time demonstrating unconditional love for one another.

As a Hackney resident of many years, Sally El Hosaini researched the characters and lives of those she depicts on the screen carefully. She struggled for over five years to finance the film, but the final result is a remarkable achievement, both in terms of cinematography and the way in which she tackles identity and relationships within the London urban scene. It is subtle when required and brutal when necessary.

The genre has a predictable style and content, but El Hosaini has dispatched with conformity and seeks to challenge our preconceptions and expectations. She is interested in exploring British Arab youth and the desire to seek an identity in a city that is complex; and at the same time she is discerning in coping with Muslim culture.

Mo (Fady Elsayed) is a young, impressionable and talented student sharing a room with his older brother, Rashid (James Floyd) on a Hackney housing estate. Rashid is a boxer and a drug-dealing criminal who quietly slips £20 notes into his mother’s purse. Mo idolises Rashid and, despite warnings to keep away from the drug scene and gang culture, Mo is drawn into that world slowly at first but then headlong after being robbed whilst in possession of his first delivery. Both brothers try to walk the line between wishing to realise their parents’ aspirations, and reaching out for easy money and acceptance from their juniors and elders. They achieve neither.

The language of the street used throughout the film is real and alive. It is uncompromising, sharp and unforgiving. It is used to dismiss women and the young men demonstrate swagger but little soul; they crow about what they value and can see no further than drugs, money, guns and sex, but fail to realize that the walls of the estates around them are slowly suffocating their chances of survival. The estate defines them; it also buries them. The dialogue gives the impression of being naturalistic; however, speaking at a showing of the film at the Hackney Picturehouse, James Floyd admitted it was scripted closely.

The most poignant line of the film is, ‘It’s all about where you put your frame’. It is spoken by one of Rashid’s customers, Sayyid (Said Taghmaoui), a French photographer. He is obviously talking about a photographic picture, but it is also a metaphor for the perceptions we bring to drug and gang culture and the inner city estates. The director’s skill lies in capturing a harsh lifestyle through a beautifully-shot film that never fails to surprise. There is a grace and intimacy to the close-up shots as the sun sets over the estate and the characters’ fortunes; you are led willingly to conclude that the characters want to be better than who they are currently and what they have. Hackney appears to glimmer through the frames and the distant sight of the Olympic Park over the rooftops allows us to compare our recent experiences of this exciting part of London with far lower expectations in the lives of these urban youth.

Sally El Hosaini’s surprise twist is to tackle the last taboo of inner city gang culture – the acceptance and acknowledgement of gay identity and love. The homophobia associated with street culture is rife, but this film tries bravely to expose masculinity in all its forms in a considerate and realistic way. The fact that being a terrorist is seen as more acceptable than being gay by a character in the film defines very well the attitude to homosexuality that dominates some parts of urban Britain. The film will initiate a long overdue dialogue that there are gay gangsters on the street. Those who embrace that world are going to feel uncomfortable with this, but maybe that is the point.

It is a very admirable film in many respects, capturing beautifully a moment in time and defining the walls around the aspirations of a disenfranchised youth. The contrast between the Muslim characters’ acceptance and rejection of their faith and the lives they live allows us to question our own perceptions of cultural identity. In the end, Sayyid is right; it is all about where you put your frame.