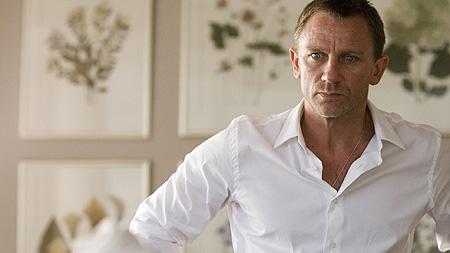 
Appropriately enough for a film which starts in Los Angeles, there are a number of fault-lines running through Flashbacks of a Fool:  three, at least—gender, nationality and fame.

I’ll start with gender, since it allows this reviewer to return to a theme:  men in various stages of crisis in contemporary American cinema.

Ever since that moment in Casino Royale, when he emerged from the sea (like a male version of Botticelli's Venus, and as vital and sexual as Halle Berry) Daniel Craig has become an icon—a  blond Bond-shell.  Here, Craig plays film star Joe Scott; like Bond, Scott seems to have it all:  beautiful women, fast cars, style, money and an incredibly well-designed house (with not a single book to be seen, incidentally).  Scott, however, is unambiguously in crisis.  It’s partly chemically induced, as is clear from the ministrations of his entertainingly glamorous dealer, Sister Jean.  She minces her way into Scott’s beach-front home around about ten minutes in with no fewer than five of those funny little self-sealing bags of cocaine one sees in films and occasionally on the street. I’m no expert in these things but I think we are meant to know that that’s some habit. If, you are lucky enough to have had no direct experience of drug consumption, the photography helps here, and it’s very good:  subtle distortions, sudden extreme close-ups (just a little too close), a shot of frying meat that lingers just a little too long, and a set of mirrors and portraits that reflect and re-project over-lapping and confusing images of self.  All reflect and communicate that good old theme:  which of all these many egos am I now?  And part of his crisis, is around his gender.

I suppose a gender crisis of some sort is inevitable in a film which involves flash-backs to the 1970s.  Because, however stylish that decade now is for art-students and the young, it is just irredeemably camp.  Explicitly so, in this film, since the 70s to which Scott returns is not that of industrial militancy, punk or the anti-Nazi League, but Brian Ferry, David Bowie and glam rock.   The campery, however, begins in California, even before the 70s flashbacks take us to the producers’ imagined Britain:  one of his numerous lovers leaves him with a fashionable ‘stuff-it-in-your-hand-bag’ toy dog, and the result is the delightful image of this manliest of men strutting out, toy terrier under-arm.  This homosexual subtext hits you with a bang both through the central plot device (it is the death of his childhood best friend which prompts Joe’s crisis) and because the first of Joe’s memories that we see in flashback is of two teenage boys masturbating.

The second fault-line is around nationality. Joe is British, and chooses to return to England for his friend’s funeral.  But for reasons of budget, however, the film-makers went to South Africa to shoot most of the English scenes. The result is very odd, and Joe’s memories are (for a UK audience) very difficult to place—the seaside of his adolescence is…  not quite right:  the waves are the wrong shape, the light comes in at the wrong angle, the beach-front homes and the sea-side town are just not, well… British.  Why is this important?  Because the effect is like Johnny Depp’s cockney accent in From Hell: it’s simply wrong. This is a film about memory in which a significant effort has gone to recreate the world of design and popular culture of the 70s. They got that right, but the mistakes around the architecture and the landscape do nothing but jar, confuse and mystify.

The third fault-line is around fame.  It seems at first that Joe is addressing the pain of fame, the consequences of his choices and the decisions that have led to the life he now leads.  The film itself, however, seems unable to escape the dark power of celebrity. It ends with Joe not only returning to Los Angeles and fame but to everything that the previous two hours should have made him re-evaluate. In the final frames, there is nothing to suggest progress, change or growth. And it’s communicated in the medium of film itself. The final three minutes must have been the most expensive in the whole thing: a real-time tracking shot from a helicopter, watching Joe and his house-keeper-cum-chauffeur drive from the airport, over the bridge, down the freeway and back into the icon of a uniquely American mammon that is Los Angeles.  A lot was thought, a lot was seen, but nothing changed.  I suppose that’s the point.