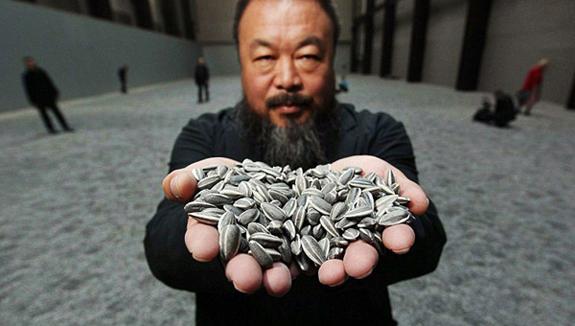 
Chinese artist Ai Weiwei’s Sunflower Seed exhibition at the Tate Modern in 2010 was extraordinary. Made up of 100 million hand-painted sunflower seeds, it left a lasting impression of the man, of China and the ability to produce on such a colossal scale such a curious and inspiring piece of art. It left you wanting to know more about the man and those he employs to create such pieces of work. As you walked gently over sunflower seeds you felt there was an enormous untapped potential of modern China. If they can produce this, what else can they do?

Alison Klayman’s documentary on the life and work of Ai Weiwei covers the period from December 2008 until late 2011. It is her first major piece of work and the Mandarin-speaking, American filmmaker has captured a very important moment in time, whilst demonstrating the frailties all documentaries have in being part observer, part storyteller. She goes some way towards explaining what kind of man Ai Weiwei is and what he is trying to achieve. It is an engaging and endearing profile of a very modern man coming to terms with his social profile. At the same time, the film explores who he is and what he seeks for the future of his country and the government’s continual crack down on freedom of expression. Ai Weiwei the man comes over more than the artist and it is all the better for that.

He is an outspoken domestic critic who is sticking his middle finger up to the Chinese state whilst using the other hand to blog and tweet his reasons for doing so. He came to notoriety with his photographs of the middle finger famously being directed at famous landmarks such as Tiananmen Square. This impression never goes away throughout the documentary. He observes and chastises, he questions and he reflects. Then he uses blogs and Twitter to let us know simply and clearly what we need to know. We choose to disseminate what we will accept and what we will discard. It’s the modern way and throughout the film he comes out with wonderful lines that make you sit up and take notice. He challenges us all to live our lives and ‘never retreat, re-tweet.’

His use of social media is clever and simple, although he is continually having to jump over the Chinese internet firewall using a VPN (virtual private network) to get his message out. At times the message gets lost, but such is the character of the man you cannot help but become more and more intrigued at his insight, humour and self-deprecation. It is easy to forget momentarily that he is a very talented artist and at times the film lets this quality slip quietly into the sky like a Chinese lantern. When asked what he wishes us to take from his work he replied, ‘I think they should really think that freedom of expression is very valuable, and they should treasure this right.’

Klayman has focused her attention on Ai WeiWei’s determination to highlight the individual schoolchildren killed in the Sichuan earthquake by naming them. To see the painstaking detail he went to in addition to filming the debris and aftermath whilst undercover is poignant and challenging. The personal portrait of the man shows him as a dutiful son, reflective husband and at times an absent father. He is a contradiction; he can work with the State on projects such as the Bird’s Nest and then humiliate them by use of his phone camera. He is human, and the irony and humour of having a meal with supporters in flagrant disregard for the authorities watching and filming him is an uplifting moment.

Ai Weiwei may have his faults and his critics, but his courage is inspiring and to watch him film with calm detachment at the destruction of his own art studio by the authorities was very poignant. He has endured arrest and beatings, disappeared for 81 days in 2011 and received an unpaid tax bill of 15 million yuan (£1.5 million). When asked what it meant to be powerful he gave the reply, ‘it means to be fragile’. He is a man to be followed and I advise you to do so on Twitter. Watch the film and understand that we all have a duty to observe and shape our world.

Who is going to pay for it all?

A seamless ethic for siblings all: the hope of Fratelli tutti