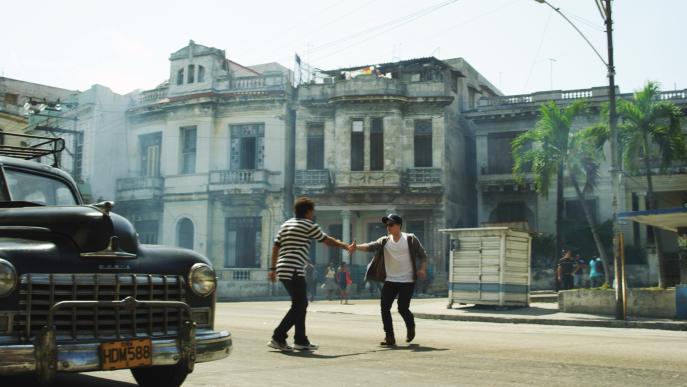 
As a collection of short films about Cuba’s capital, 7 Days in Havana is both disappointingly trivial and maddeningly incoherent. There is little connection between each director’s segment, aside from a few recurring characters and the sites of the city. Havana is variously home to violently erotic voodoo ritual, a pretentious film festival (with the inevitable tortured artist-director emphasising its shallow heart by getting drunk and hanging out with ‘real people’), a vibrant underground where sexual diversity is celebrated, hopeful jazz singers in stylish bars, failing baseball players who maintain their relationships through the threat of violence, a domineering old woman who has visions that are taken seriously enough to persuade a community to remodel her house with a shrine, funky teenagers who dance in any available public space, mordant cleaners in elegant hotels, shabby beach huts that house hot jazz sessions, knowing concierges and innocent Americans abroad. This omnibus feature deliberately aims to capture the familiar diversity of urban life, but in the comprehensive range, any sense of Havana’s identity is dispersed into the discrete, alienated episodes.

Benicio Del Toro’s section is little more than an extended joke – American tourist, desperate to pick up an exotic Cuban girl, ends up in the hotel with a convincing transvestite. Gaspar Noé wallows in dark sensuality by filming, without commentary, a ritual apparently intended to rid a teenager of her lesbianism. The final film from Laurent Cantent switches suddenly into a more documentary mode, following the adventures of a group of residents trying to build a shrine on the cheap. There is an obvious enthusiasm for Cuba in all of the segments, but in the rush to achieve a broad vision, the specific qualities that might make Havana different to any other capital city are lost. The jazz, the baseball, the star-crossed lovers, the packed nightclubs and the soulless hotel, the prostitutes, the teenagers shaking their thing and the naive tourist: Havana becomes the beautiful backdrop to their activity without ever revealing its unique character.

Only in Elia Suleiman’s comic interlude and Julio Medem’s ‘The Temptation of Cecilia’ does the political context of Cuba emerge: a speech by Castro is repeated on television as Suleiman wanders Havana, silent and dislocated; while Cecilia ends up joining an attempt to escape to Miami. The idiosyncratic blending of Christianity and paganism is referenced, especially in Cantent’s finale and Noé’s brutal exorcism. If the film hopes to preserve a particular moment in Havana’s history – previews have suggested that this period will be remembered as the transition away from Castro’s long rule – it emphasises a social tumult rather than the impact of communist government.

This removes any bite from the films: for the most part, the short films are amusing or sincere snapshots that could easily serve the purposes of the Cuban tourist board. Although Noé’s ‘Ritual’ does have a vicious edge, the barely suppressed misogyny tips it into an orientalist savagery. For a project that appears to chase after the soul of Havana, this portmanteau film lacks depth and passion, and seems content to repeat clichés of heat, sensuality, cool music and exotic religion.